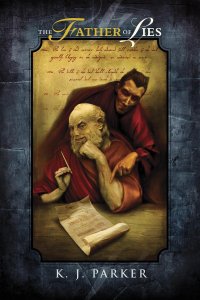 Like many other ultra-prolific and career-splitting authors before him (I’m thinking “Evan Hunter” and “Ed McBain” as an example), Tom Holt manages to put out multiple books every year, one or more under “Tom Holt,” and one or more under “K. J. Parker.” The year 2017 saw the publication of Holt’s The Management Style of the Supreme Beings, while Parker delivered The Two of Swords. Each byline can be associated with a different style and set of concerns: Holt is frothy Wodehouse/Thorne Smith comedic fantasy with a sharp edge, while Parker is somewhat grimdark with intermittent layers of absurdity. Thus we can easily affirm: “He is large, he contains multitudes.”

Leading off 2018 comes the latest Parker book, this time a volume of novellas and shorter pieces, to the count of a dozen. This stellar achievement has the effect of adding diversity to diversity. Not only is Parker different from Holt, but Parker himself sprawls across the literary map!

The first thing to mention, a generality about these stories, is that Parker loves a looping narrative, one that doubles back on itself for historical recountings, then hopscotches forward. I finsd this elliptical style of tale-telling charming and rewarding, but those in favor of a straight linear narrative will have to adjust to receive the rewards.

Another facet of the tales if Parker’s favoritism towards first-person perspectives. He loves inhabiting the twisted souls and psyches of his protagonists, allowing them to hang themselves with self-delusion, or save themselves with hard-won self-knowledge. Often these narrators never name themselves, encouraging us to view them both as unique individuals and as archetypes.

“The Things We Do for Love” is the tale of a man and a woman locked together for what could conceivably be eternity in a perverse love-hate relationship. Having said that, I will next aver that the tale is hilarious. Our narrator is a charming young thief who has the misfortune one day to encounter a witch named Onofria. Onofria tumbles for our lad and proceeds to fulfill his every wish. But our hero eventually tires of perfection and easy fulfillment, and seeks to break off with Onofria–by strangling her to death. Just one problem. Witches are immortal. And there is similarly no escape in death for our narrator, as witches can also resurrect people. The subsequent decades of their battling lives are recounted with droll glee. Also of note is Parker’s easy way with Vancian place names and exotic milieus.

What is life like for a whimsical goddess nicknamed Pumpkin, who chooses to consort with mortals and help them achieve their fates? When you read “Downfall of the Gods,” you’ll marvel at the variety of trouble and misunderstandings that can ensue, both between goddess and human, and among the deities themselves, who tend to be jealous and cranky. But even a journey to the House of the Death fails to quell Pumpkin’s blithe irresponsibility.

While the first two stories were fun and games, “The Last Witness” is truly creepy. Our narrator is basically a sociopath with a unique talent: the ability to steal memories. He employs this skill for hire, earning his living both by “curing” people of their bad memories and also by stealing valuable ones. Ultimately, though, no one suffers more than our wild talent:

I don’t want to detain you any longer than necessary, but I’d just like to share a few insights with you, as the world’s greatest living authority on suffering. I reckon I can claim that honour. I’ve caused more suffering, endured more suffering, witnessed, experienced, inflicted, savoured, analysed, enjoyed, dissected, wallowed in more suffering than anybody else who’s ever lived. I have been in the mind of my enemy, my victim, my persecutor, your enemy, your victim, your persecutor; I know pain like fish know water, like birds know air. Suffering has fed and clothed me most of my life, I’ve sunk my roots deep into it and sucked it up into me; pain and suffering have made me what I am. To be quite honest, I’m sick and tired of it.

How many times have authors been told, “Don’t try a ‘deal-with-the-Devil story,’ they’ve all been overdone ages ago.” And yet it only takes one excellent counterexample, such as “The Devil You Know” in this volume to prove otherwise. An elderly philosopher named Saloninus sells his soul in exchange for twenty years of youth and endless wishes, granted by his personal demon assistant (our put-upon alternating narrator). What is Saloninus’s game plan and can he avert damnation? The story ambles across a leisurely stretch of decades to unfold all its twists and turns, with our hellboy’s perplexity and confoundment providing a great amount of comedy.

The Master Mage and Apprentice motif gets a surprising extension and inversion with “I Met a Man Who Wasn’t There.” This Master’s teaching methods include pushing his apprentice right through the atoms of a wall–unfortunately, it’s an exterior wall three stories high.

Parker has a gift for great opening lines: “I was sure I’d come to the right place when I saw the hands nailed to the doorpost. I sighed. It shows the right spirit, I suppose, but there’s no actual need for it.” That’s how “Heaven Thunders the Truth” begins. In this adventure our wizardly lead labors under a strange condition: “We sleep a lot, in our profession. We have to. For one thing, living with the snake—just being alive, with the snake inside you—is exhausting, like carrying a six-gallon pot on your head wherever you go. I feel the weight of her whenever I stand up, it’s a sort of shock in the knee-joints. No wonder so many of us are cripples by the time we’re thirty.”

Ghosts, secret formulas, and a plague dubbed the Red Death occupy the pages of “Message in a Bottle.” As so often in Parker’s tales, not all goes to plan. “They tell me that most of what used to be the City is just grass and brambles now…”

The lives of writers and lives on the stage is the realm of “Rules,” which also has some intriguing new definitions of sin: “A sin committed in order that something of overwhelming benefit to Mankind may take place is not a sin.” This kind of ostensibly silly and quibbling moral and ethical parsing, deeper than it first seems, is integral to all of Parker’s tales, since his characters invariably find themselves in situations that cause them to reassess their own belief and stances, then either violate or affirm them.

“Safe House” features a magical narrator who in his powers bears some resemblance to Onofria from the first tale, and an occult system developed along the same scientific lines. The circularity of the story, finding our hero about to be hung at each end of the adventure, is a pleasing construction.

Even though the beast in “The Dragonslayer of Merebarton” is a “White Drake” and not an actual dragon, it still presents enough of a challenge to our protagonist and his motley crew that it’s touch-and-go for a while. Not to spoil the tale, but I have to quote a climactic moment to highlight Parker’s standard deadpan cynicism.

I tried preserving the head in honey. We got an old pottery bath and filled it and put the head in; but eight weeks later it had turned green and it stank like hell, and she said, for pity’s sake get rid of it. So we boiled it out and scraped it, and mounted the skull on the wall. Not much bigger than a big deer; in a hundred years’ time, they won’t believe the old story about it being a dragon. No such thing as dragons, they’ll say.

The final two tales, “Told by an Idiot” and “No Peace for the Wicked,” forsake imaginary worlds to take place on our Earth. In the former, a demon in a bottle enlivens the playgoing crowds in old London; and the final tale finds its satisfactions in examining the convoluted plotting behind the selection of a new Pope.

Parker’s inventiveness ensures that the scenarios for all his stories are varied and contrasting. And yet, as mentioned, the characters all share the same proclivities for greedy self-advancement and so they tend to fall into similar fixes. His dialogue-heavy passages work very well on two axes: moving the tale ahead and building portraits of the speakers. His shared subcreation affords lots of little niches for these adventures. I do wish he had not employed the same metaphor about the ease of luring a pig into a cart in nearly every story, but such inadvertent repetitions of a writer’s favorite witticism are found in the canon of all busy professionals.

Ultimately, Parker’s declamation of a universe that jests, sometimes cruelly, with us mortals and is rigged to frustrate all our ambitions and dreams is the closest thing we have nowadays to a Cabellian sensibility. Even at the end of noose, his heroes know that a brilliant quip makes a better epitaph than raging in tedious fashion against the unfairness of it all. 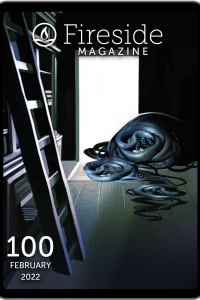