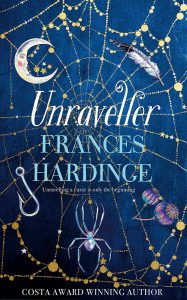 If you live in Raddith, and you hate someone deeply enough and long enough, you might develop what the people there call a curse egg. When you’ve really, really had enough of that per­son, you can let the curse go and the object of your hatred will be cursed, usually in ways poetically vicious and related to the reason for your hatred. This ability is connected to Raddith’s proximity to the Deep Wilds, that abode of supernatural creatures who are generally looking to trap, maim, or just kill humans; curses are thanks to the Little Brothers, who look like spiders but aren’t. Curses aren’t common enough for everyone to be living in fear of one every day, but they are common enough that everyone knows someone who’s been cursed. They’re also common enough for the Red Hospital to have been created as a place to house those who curse and are then found out. Just because the abil­ity to curse is from a supernatural source doesn’t mean a curser gets away with it.

Unraveller is Frances Hardinge’s first book since the Lodestar-nominated Deeplight in 2019. It focuses on the titular “unraveller,” adolescent Kellen. No one else can do what he can do, which is to somehow understand the makeup of a curse – the strands connecting the curser and cursed – and, as the name suggests, unravel them: he can undo curses. It’s not easy, and it requires investigation, but he can indeed make it so your aunty stops spew­ing frogs and toads when she speaks, or whatever the curse is. Kellen has been joined in his travels around Raddith by Nettle, whom he rescued from a curse some time ago and who cannot go home; joining Kellen seemed like the only real option. She’s generally more practical than he is, so can put the brakes on some of his wilder ideas; those who have been cursed can sometimes sense that touch of the Wilds that lingers around cursers, making her useful as Kellen looks for work unraveling curses.

As the story opens, Kellen and Nettle are ap­proached by Gall, a man who has made a sinister bargain to become a marsh horse’s companion. The marsh horse may look horsey, but everyone knows it’s a Wilds creature, which makes Gall fey by extension. Gall wants Kellen, in particular, to work for his master, searching out and understand­ing curses and cursers. Traveling with Gall brings Kellen and Nettle to the Red Hospital, where they discover that a curser they thought was safely in custody is, in fact, at liberty – and probably look­ing for revenge on those who put her away. They follow threads of information, mostly via others whom Kellen has helped, to Mizzleport: the main seaport of Raddith, where Chancery has its seat. Chancery passes for the government of Raddith, because they ensure that the Pact between the humans and the creatures of the Deep Wilds is honored so that they all can live in some sort of harmony. As we all know, bureaucracy grows like ivy in any place it gets a toehold, so now Chancery has many divisions. Perhaps unsurprisingly, Kellen and Nettle discover that there is a problem at the heart of Chancery, and the rest of the novel fol­lows the two teens as they try to understand who is responsible for what, who has been led astray, and who is completely innocent; and then how to unravel the problems they encounter, preferably without it costing themselves too much.

Raddith might be a fantastical place, but the problems and concerns of its inhabitants are real and familiar. One character bitterly expresses feeling like a bit-part in someone else’s narrative; others are bewildered by how anyone could hate them enough to curse them. Those who recover from their curses cannot always go back to their old lives: circumstances or they themselves may have changed too much; whichever the case, it doesn’t make going on with life a straightforward proposi­tion, which itself leads to problems. Characters run the gamut of humanity: sometimes lazy, sometimes mean, sometimes cruelly ambitious, some even genuinely good and earnest. I guarantee you know someone like every character in this book.

Ultimately, through Unraveller, Hardinge shows a deep understanding of how people work: their hopes and aspirations, nightmares, and everyday doggedness. As she has in previous novels, Hardinge continues to explore humanity with honesty, compassion and – perhaps most wonderfully – hope. 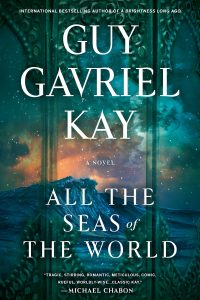