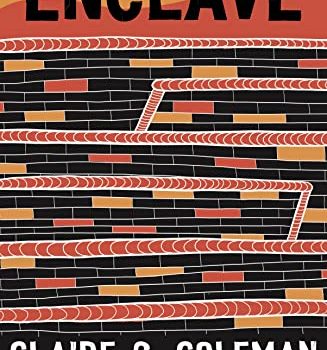 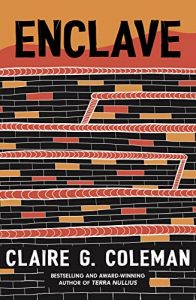 Claire G. Coleman’s third novel Enclave seems, at first, deceptively simple. Coleman is an Indig­enous Australian; Enclave follows Terra Nullius (published by Hachette in Australia, and Small Beer in the US) and The Old Lie (also Hachette). In this novel, the language is direct and seems to be telling the perhaps ordinary story of a girl growing up in a deliberately isolated city, which is keeping itself separate because of disasters hap­pening elsewhere in the world. All very straight­forward, and a few chapters in, if this were your first Coleman novel, you might wonder if there’s a ‘‘but’’ coming; if you’ve read her others, you’ll be on tenterhooks, just waiting. There is a ‘‘but,’’ of course; there’s sentences like this: ‘‘Heat from the roadway blasted up to meet the head raining down from the open sky; these competing heats did not feud, they united, formed a gang, went looking for trouble.’’ Eventually, life for Christine, the protagonist, takes a dramatic twist and exposes everything that she’s been taught, and the reader has so far learned, as a lie.

Christine has always learned that the outside world is full of violence, and that her city is the only safe place to be. It’s safe because of con­stant surveillance, the wall around the city, and because no new people are allowed to live there. She knows that everyone who lives in her town is white, while all the nameless servants who come and go are not; this is not something to be questioned, it’s the correct way for things to be. Christine is not entirely happy: she’s recently finished her undergraduate degree, and feels at a loss; the recent disappearance of her best friend is adding to a sense of unease; enrolling in a postgraduate program just seems to be a holding measure. Within the context of her city there’s little that can be done to change her situ­ation. Everything is controlled, and indeed there should be no reason for dissatisfaction. She has everything she could possibly need, including a line of credit and the promise of a new apartment from her father. Feeling that emulating her mother might help, she attempts to keep up with her drinking; this has predictably disastrous results. More disastrous, though, is her attraction to one of the brown-skinned servants – both because of the race issue, and because the servant is female. For these offensive actions, Christine is expelled from the city. And this – nearly halfway through the story – is where Christine and the reader begin to understand what the world outside the enclave is really like. Rather than her city being the last, safe, refuge in a violent and terrible world, it is instead an isolated town of bigots. When Christine finally gets to Melbourne, she discovers a world of diversity, and of hope, that she had never dreamed as a possibility.

In her previous two novels, Coleman has taken issues from Australian history – the ‘‘legal fiction’’ of terra nullius (her first novel), and the experience of Indigenous soldiers in wartime (her second) – and given them a science fictional treatment. Despite their rootedness in Australian experiences, they are nonetheless relevant more broadly – per­haps especially for those with their own settler-colonial experiences, for the full devastating im­pact, but also as exceptional science fiction novels in their own right. In this third novel, rather than using Australian history, Coleman is mostly using modern and potentially future Australian (and broader) fears and expectations to explore experi­ences within, and reasons for, a gated community. Rather than being a safe-but-necessarily-restrictive enclave in a dystopian world, the enclave is itself the dystopia, with the attendant reversal showing that diversity, true community, and openness are at least part of a better choice. I was quietly hor­rified when I started reading Enclave, because Christine’s city was so oppressive and I just didn’t understand what Coleman could eventually do in this context. I shouldn’t have worried. While Terra Nullius and The Old Lie weren’t exactly beacons of hope, they were clever and complex and full of revelations. Enclave is equally clever and complex, and ultimately hopeful. Coleman is going from strength to strength.

This review was written on Wathaurong land. 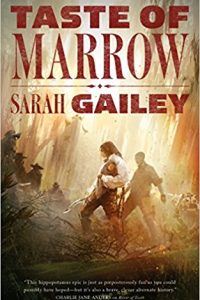 Liz Bourke Reviews A Taste of Marrow by Sarah Gailey