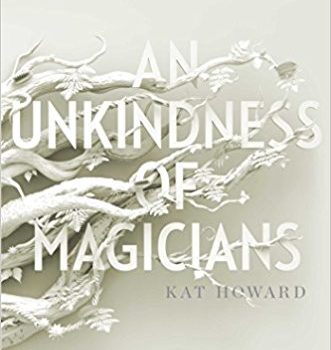 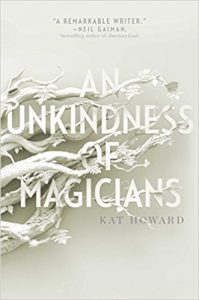 Kat Howard’s first novel, Roses and Rot had strong folkloric influences. It was a version of Tam Lin set in an art­ists’ retreat, and its main characters were two sisters – although only one was our viewpoint character – who had survived childhood parental abuse to find relative success in their respective careers as a dancer and a writer. Told in the first person, with a lyrical prose style and what felt like strong influence from Pamela Dean’s Tam Lin, it seemed to point to an interesting quasi-literary direction for Howard’s career.

An Unkindness of Magicians, Howard’s second novel, is different in nearly every way. Well, apart from two: it has a contemporary setting, and it’s really good.

At least once a generation, New York’s com­munity of magicians – divided into “Houses” on some magical basis that is not entirely clear – hold a contest to determine who leads their community, who gets to form new Houses, and which Houses will slide into oblivion. This contest is gladiatorial in style, in the form of magical duels, and in its later stages the duels are to the death.

The magical Houses of New York are linked by social and familial connections, by old feuds, and by old betrayals. A generation or two ago, House Merlin, the current leader of the magi­cal community, made a deal with the House of Shadows. Now children are tithed to Shadows and never return. Their suffering means that the magicians of New York’s Unseen World pay no price for their own magic.

Miranda Prospero, head of House Prospero, hires Ian Merlin, estranged son of Miles Merlin (head of House Merlin) to represent her in the contest. Ian is reputed to be the best magician of the age. His price? If Prospero wins, and ascends to leadership of the Unseen World, Miranda will undo the bargain with Shadows. Ian may have to face his sister Lara, representing House Merlin, in the contest.

Meanwhile, Harper – a young woman barely connected to the Unseen World – is trying to track down the man (the magician) who killed her best friend. She gets closer to her goal when she gets a position with a legal firm that handles mundane and other business of the Houses. Unknown to her, but made plain early on to the reader, the killer is Gray Prospero, Miranda Prospero’s disinherited son, an unpleasant and entitled – and serial killing – young man, who’s hidden the least pleasant aspects of his character well enough that Laurent, a very decent young man whose magic involves some aspect of luck, considers him a friend.

Laurent is black, where the Houses of the Unseen World are mostly old-money white. He wasn’t born into the Unseen World, and doesn’t know about the bargain with Shadows. He wants to take part in the contest and found his own House, so he hires Sydney, a young and very talented magician who seems to have come out of nowhere. Sydney is really good at what she does, but the reader soon learns a) that she is bound to Shadows and forced to carry out their agenda and b) that she has an agenda of her own, which involves destroying Shadows and tearing down the Unseen World’s reliance on using other people’s pain to fuel their magic.

While this is going on, something is going wrong with the magic that is being channelled back to the Unseen World through Shadows. Spells are going wrong. Magic is not working. People have died.

There’s a lot going on in An Unkindness of Magicians. One of its main thematic arguments is about power and exploitation, about exploiting other people to gain or to hold onto power (as Gray Prospero and Miles Merlin do, in ways that involve torture and death) or about choosing the easy way out, as Miranda Prospero does, and deliberately avoiding thinking about the ugli­ness on which her life is based. But her deliber­ate blindness is contrasted with the clear-eyed decisions of people like Ian Merlin, who turned his back on using other people’s suffering to fuel his magic as soon as he could; Harper, who sets out to bring her friend’s killer to account despite not really knowing where to start, and knowing that it will put her in no small amount of danger; and Laurent, who when Gray’s true nature is revealed to him makes no excuses for his former friend, but disavows him – and who, when he learns the nature of the bargain with Shadows, disavows it and wants to learn how not to use magic that has been filtered through Shadows.

And then there’s Sydney, who in the end chooses to protect other people – to protect magic itself – and pays a terrible price for it.

An Unkindess of Magicians is a really good book. Its characters come vividly alive, its prose is precisely observed, and it’s both tense and incredibly compelling. I liked so many things about it – the way that Sydney has friends, fe­male friends, despite her traumatic history, and the way she cares about them; the complicated and slowly-blossoming relationship between her and Ian Merlin, which is overshadowed by the knowledge that they may end up fighting to the death; the way that Howard treats her emotional themes deftly, with understated grace.

It’s really good. Seriously. You should read it.