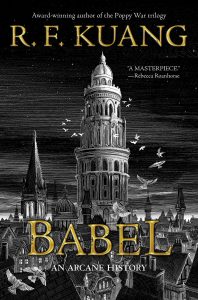 With Babel: Or the Necessity of Violence: An Arcane History of the Oxford Transla­tors’ Revolution, the multi-award nominated R.F. Kuang travels to 1830s Oxford University to build a tale about a tower built on languages whose fate is all but guaranteed. Her story about colonialism and its collapse revolves around Robin Swift, a soon-to-be Oxford student plucked from his dead mother’s arms in Canton by Oxford’s Professor Lovell and brought to London. Robin’s deliverance wasn’t a random lucky break. Lovell’s connection to the boy is one that becomes increasingly clear as Robin finds his footing in his new city – and his fluency in both Mandarin and English is what seals his entry into Babel, the translator’s college.

Students are funneled into Babel. What comes out is the silver work (read: magic) that the Brit­ish Empire is built on. Without the translators who create it – the process has to do with the resonance between similar words in different languages – several different kinds of hell will break loose and the Empire will likely fall. Robin and the three other teens in his cohort start out in love with all that the college has to offer. Of course, that can’t last. They realize the whole system is built on the extraction of resources and exploitation of people, and they are pushed into doing something about it.

Kuang takes a big swing with Babel. She folds history lessons into the story, illuminating everything from the Poor Laws to the Luddites and back again. The problem is that this mar­riage of fiction and non- doesn’t feel to me like a harmonious one, partly because, at least to me, Kuang throws subtlety out of the window about halfway through. Robin’s story is populated by cardboard characters who don’t develop their own energy. The antagonists do everything but twirl their mustaches. To me, the main protago­nist bobs along until the plot escalates despite his inaction. Kuang gives him reasons for his choices (or the lack thereof) but they feel unsup­ported by everything we know about him up to that point. While Kuang’s larger points about colonialism and empire are well supported, the story that surrounds them never really finds its own equally strong footing. 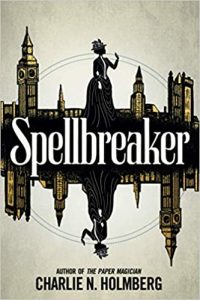 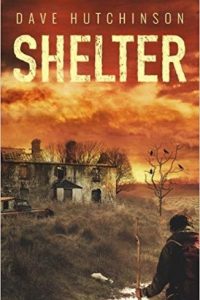