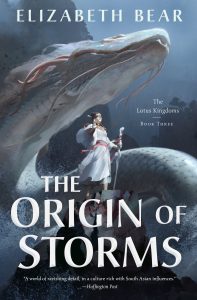 Elizabeth Bear, The Origin of Storms (Tor 6/22) This final volume of the Lotus Kingdoms trilogy (set in the same world as her earlier Eternal Sky se­ries) showcases her rich worldbuilding and dazzling imagination, and brings the interwoven stories of her vividly realized characters to a satisfying conclusion. 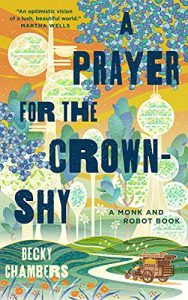 Becky Chambers, A Prayer for the Crown-Shy (Tordotcom 7/22) Chambers began the Monk & Robot series with the thoroughly charming A Psalm for the Wild-Built, and this second installment continues the gentle, philosophical tale of an itinerant human monk struggling to find meaning in life who travels with a ‘‘wild’’ robot who wants to understand how humanity is doing since the robots retreated to the wilderness. They’re a delightful duo to spend time with. 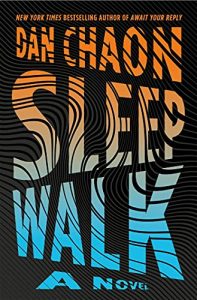 Dan Chaon, Sleepwalk (Holt 5/22) This near-future SF novel features a mercenary who finds out he has a biological daughter in need of help – familiar thriller tropes, enriched by a generous dose of dark humor and a distressingly believable vision of a fractured United States on the cusp of apocalypse. 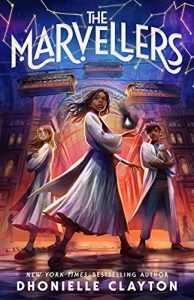 Dhonielle Clayton, The Marvellers (Holt 5/22) This fantasy novel, first in a new magical school series, fol­lows Ella, the first Conjuror ever allowed to attended the Arcanum Training Institue for Marvellers – an admission that provokes the outrage of traditional­ists who consider Ella’s form of magic ‘‘bad and unnatural.’’ This is the first middle-grade novel by the acclaimed author of the Belles series and Shat­tered Midnight. 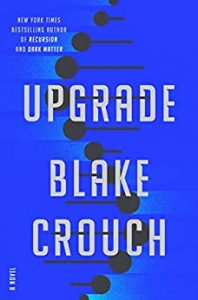 Blake Crouch, Upgrade (Ballantine 7/22) The compulsively readable author delivers a compelling thriller about an agent investigating an illegal genetics lab who undergoes a bizarre transformation… and discovers a plot to kickstart a new stage of human evolution. ‘‘A wildly entertaining narrative that reveals its shapeshifting nature as the story progresses…. an intricately plotted, lightning-fast tale that charts one man’s thrilling transformation even as it asks us to ponder the limits of our humanity – and our boundless potential.’’ [Gabino Iglesias] 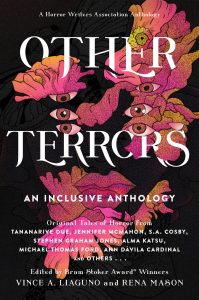 Vince A. Liaguno & Rena Mason, eds., Other Terrors: An Inclusive Anthology (Morrow 7/19) This anthology from the Horror Writers Association features 22 original horror stories (plus two poems) focused on fear of the ‘‘other’’ in a multitude of forms, with stories by established voices and rising stars including Eugen Bacon, Tananarive Due, Alma Katsu, Gabino Iglesias, Stephen Graham Jones, and Usman T. Malik. 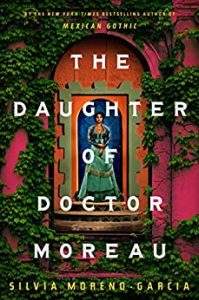 Silvia Moreno-Garcia, The Daughter of Doctor Moreau (Del Rey 7/22; Jo Fletcher) Moreno-Garcia continues to show off her astonishing range with this re-envisioning of the classic H.G. Wells SF novel The Island of Dr. Moreau (1896) relocated to the Yucatán and featuring Carlota Moreau, daughter of the genius (or lunatic) who created animal/human hybrids, as she begins to question his work and the underpinnings of her own privileged life. ‘‘With its evocative prose, post-colonial historical setting that drives the plot, and the introduction of vibrant, fascinating characters, both familiar and new, The Daughter of Doctor Moreau very much stands on its own.’’ [Ian Mond] 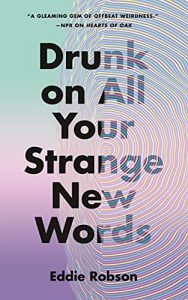 Eddie Robson, Drunk on All Your Strange New Words (Tordotcom 6/22) This near-future mystery, rich in politics and diplomacy, concerns a woman who works as a translator for the telepathic alien Logi, doing her best to convey their thoughts in English – but her job gets a lot harder when she finds herself embroiled in an intergalactic incident, and has to find the truth before she ends up out of a job… or in jail. Rachel Swirsky, January Fifteenth (Tordotcom 6/22) One of our most celebrated short fiction writers makes her long-form debut with this thoughtful near-future novel exploring a world where the introduction of Universal Basic Income has transformed life in the US, offering a glimpse into the lives of four women from wildly different circumstances on the day their annual payments arrive. ‘‘A fascinating thought experiment…. Swirsky chooses not to show all the possibilities that UBI may have, but instead to linger within these… emotionally resonant themes.’’ [Caren Gussoff Sumption] 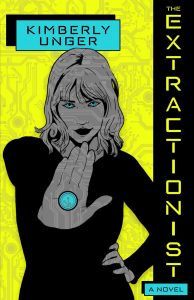 Kimberly Unger, The Extractionist (Tachyon 7/22) This fast-paced and dazzling near-future technothriller has a lot of fun with cyberpunk tropes as we follow Eliza McKay, a freelance super-hacker who special­izes in rescuing people stuck in hyper-realistic im­mersive VR. ‘‘The plot moves fast, careening quickly from cyberpunk onto thriller highway. Danger doesn’t lurk; it chases.’’ [Caren Gussoff Sumption] 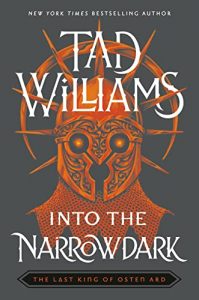 Tad Williams, Into the Narrowdark (Hodder & Stoughton 7/22; DAW) This is the third volume in the Last King of Osten Ard series, set in the world of the Memory, Sorrow, and Thorn trilogy, with the kingdom in disarray and threats looming in every direction. Williams is a master fantastist and a fan favorite, and this volume, ‘‘the first half of the last book,’’ sets us up for what’s sure to be a rousing conclusion

From the September 2022 issue of Locus. 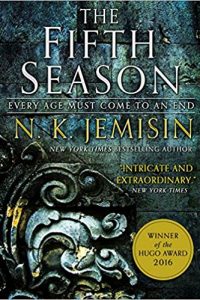 Today we’re kicking off a series of blog posts that will focus on sf poetry. What does the sf in sf poetry stand for? That’s a matter of some debate, and it’s just a small part of what Mike and F. J. talk about in this podcast. Also mentioned are what they look for in sf poetry, how they got started writing and publishing it, and the numerous venues where