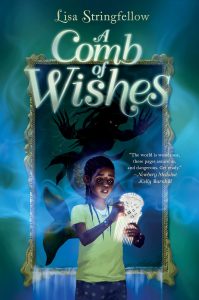 In some ways, Lisa Stringfellow’s A Comb of Wishes, which was heavily influenced by her father’s West Indian immigrant culture, is a classic ‘‘be careful what you wish for’’ fantasy. With a young protagonist, Kela, who is reeling from her mother’s accidental death only a few months earlier, the novel offers a poignant look at grief and the law of unintended consequences. The twist is found in the actions of a mermaid, Ophidia, who could have been a typical villain but is transformed by Stringfellow into a character grappling with her own powerful grief. Through a bit of mystery solving, and diligent re­search in the local archives, Kela and her friend Lissy unravel an unexpected connection with both Ophidia and the comb of the title. Toss in some moments of heart-pounding excitement, and this very endearing family drama is a sure winner for younger teens.

After Kela finds an antique comb underwater in a marine park, her compulsion to keep it quickly becomes dangerous when Ophidia, the true owner, demands it be returned. The offer of an exchange, a wish for the comb, is reasonable for both of them, but when Kela asks for her beloved mother everything gets intense very fast. This is not Pet Sematary – don’t worry about zombies suddenly filling the narrative! – but things do not go the way Kela anticipated, and her mother’s sudden return to their lives is startling to the extreme. Part of the problem is Kela finds herself unable to hold up her end of the bargain, while at the same time it is clear that her perfectly normal-seeming mother is not okay. What seemed so simple soon becomes much more complicated than Kela can handle, and she must tell her parents what she has done, and why her mother should not be alive and well.

While Stringfellow definitely does an excellent job of describing the grief Kela and her father are suffer­ing, I was even more impressed by how she writes about Kela and her friend Lissy. Pushed away after the tragedy, Lissy has patiently hung in there, waiting for Kela to work through her loss. She insists that Kela not let their friendship go, and when her friend needs help, she is right there for the research and all the other necessary girl detective adventures. After the dangerous final confrontation with Ophidia, and in the uncertain aftermath, Stringfellow doesn’t lose track of Lissy but keeps her as a crucial part of the story, just as she is crucial to Kela’s life. This makes A Comb of Wishes not only a solid fantasy, but a won­derful look at how important true friendship can be.