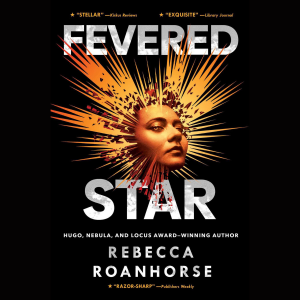 Fevered Star picks up almost immediately after the end of Black Sun, the first book in Rebecca Roanhorse’s Between the Earth and Sky series. The city of Tova is in turmoil, the sun is locked in a perpetual eclipse, and the clans across the Meridian are hastily forming alliances in preparation for all-out war. Old scores are ea­gerly being settled, new enemies are emerging, and power waits for the first person to grab it.

When we first return to our cast, Serapio is recovering from his injuries from the massacre at Sun Rock while Naranpa heals from her own emotional and physical trauma after the Watch­ers’ betrayal. With the powers of gods running through their veins and the futures they had planned for themselves dashed to ruins, there is nothing left for them to do but see where godhood takes them. Serapio and Naranpa see their roles as godly avatars very differently, so much so that any reconciliation or partnership between them may be impossible. Will they allow themselves to be pawns in an ancient game between two antagonists locked in endless battle? Will they stand aside as the Meridian rips itself apart? Or will they take control of their powers and remake the world?

Balam plays a larger role in the sequel. The Jag­uar Lord uncovers a forgotten magic that allows him to traverse the dreamscape, but not without dire consequences. As he plots and eavesdrops, Okoa, Xiala, and Iktan crisscross the countryside, making secret plans within secret plans. All Okoa wants is to protect his people, Carrion Crow, and he’s not convinced that his sister, the Matron leader, and Serapio, the prophesied Odoh Sedoh, are willing or able to put their self-interests aside. All Xiala wants is to be reunited with Serapio, before he goes too far over the edge, but this is no epic romance, and it doesn’t seem likely that their story will end with a happily ever after. What does Iktan want? Only xe knows and xe isn’t telling. Whatever it is, Iktan is scheming behind the backs of some very dangerous people.

Fevered Star is less intense than Black Sun but deeper and more detailed. Most of the various subplots involve characters moving into place for the confrontations to come in the third book. However, that doesn’t make the book any less interesting. We learn a great deal about the Meridian’s past and what kind of future each of the characters want it to have. The geography, culture, history, and belief systems all get a ton of exposition that help the reader make sense of what has happened and what is to come.

Crucially, and to me the most interesting part, we learn that much of what we thought we knew from the first book is undone by the second. In terms of world history, what each clan in the Meridian believes to be the truth is revealed to only be a part of a bigger whole. The stories the characters told about themselves often contrast with the stories others told about them, and both contrast with what really happened.

Each character sees themselves as playing a particular part in the narrative, and are surprised and sometimes annoyed to realize they’re actually something else entirely. Serapio is not the beloved god king of Carrion Crow. Naranpa is not the fearsome Sun Priest. Xiala is not the abused and abandoned nobody. Okoa is not the brave, loyal warrior prince. This process of discovery informs much of the thrust of the story. We even see it in how the plans from the first book went spectacu­larly awry. The events of the sequel largely break down into those who are trying to salvage what they can of their broken plans and those capital­izing on the chaos to institute their own plans.

But this is not really a story about what is true and what is fiction. As someone who studied and writes about history, how the people of the Meridian conceive of the world is more interest­ing and revealing than the facts. History is not objective. We process, remember, and talk about events through a framework of biases—personal, cultural, social, political, religious, etc. Often, those historical moments take on a sheen of myth or exaggeration over time, as we tell and retell them. Those events become teachable moments for the present, predictions for the future, a way of making the convoluted and complex past into something manageable and inspiring. We fold our beliefs and biases into these events until truth becomes fiction, becomes truth once more. That is what I love most about history, how malleable it is. And this messy space is precisely where Fevered Sun sits.

Readers who prefer action-packed plots found a lot to love about Black Sun; readers who prefer character development will get a kick out of Fe­vered Sun. I wouldn’t go so far as to say it suffers from middle book syndrome. What I think some might interpret as place setting to me felt more like exploration, of characters, of motivations, of the world itself. Regardless, this is a great second entry in what is likely to be a stellar epic fantasy trilogy. Bring on book three! 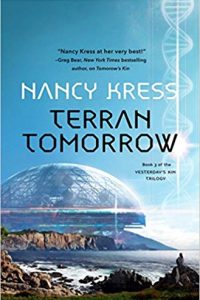