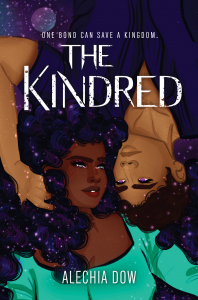 I’ve been on a bit of a science fiction kick lately. Lots of spaceships, aliens, climate crises, and dystopian futures in my to-read queue. So far, my favorite book of the bunch is Alechia Dow’s The Kindred. This young-adult novel is set in the same world as her debut The Sound of Stars, about a demisexual human and a lab-made alien who pair up to take on the Ilori invaders. Set a few years earlier, The Kindred stars Joy Abara, a teen from the dirt-poor planet of Hali and the privileged son of royalty, Duke Felix Hamdi. In the quasi-prequel, the Ilori play a crucial yet largely background role, but the novel does way more than just place-setting.

Joy and Felix are Kindred, paired at birth by an implanted chip. Through the chip they can communicate telepathically, feel each other’s emotions, share dreams, and even see what the other sees. Ostensibly, the Kindred system was meant to unite ancient enemies and keep the peace, but that hasn’t slowed the widening gap of class disparities. Due to their social stations – not to mention political scheming by adults in the royal circle – Joy and Felix are prohibited from seeing each other. Felix is content to waste his life as a wannabe musician and aimless playboy while Joy is about to be married off to a man she dislikes in order to fulfill her planet’s repopula­tion requirements.

Their plans are torn apart when Felix’s royal relations are abruptly assassinated and he and Joy are framed for their deaths. The two teens flee in a spaceship, aiming for sanctuary on a nearby neutral planet but instead crashland on Earth. Despite the dark themes underscoring the novel, Dow keeps things light and playful. In between attempts to repair their damaged ship and hide from scouts sent by the new ruler to capture them, the aliens play dress-up, attend cheer practice, and make friends with the local high school students. Things get messy as their enemies multiply and conspiracies are revealed. Given what we know of the state of our planet in The Sound of Stars, we know there is no happy ending for Earth, but Joy and Felix’s fates will be decided not by the people trying to destroy them but by the choices the teens make.

Much to my delight, The Kindred is wonder­fully queer. Although the terms are not explicitly used, context clues point to Joy being under the asexual umbrella (probably demi) and Felix being pansexual or bisexual. Several other secondary characters fly the rainbow flag as well. It feels so, well, natural. I love it when characters get to exist as queer, no coming out, no drawn out explanations, no bigotry, no hiding in the closet. They get to be unapologetically themselves.

Fat main characters are a rarity in fiction, both adult and YA/children’s, even more so in speculative fiction. With Joy, Dow explores the intersectional­ity of identities. Joy loves her dark skin and tightly curled hair. On Earth, she is assumed to be of the Black diaspora and is lovingly guided into our cul­ture by Black human characters. In her home empire, people try to shame her for being fat and push weight loss on her. They treat her like her weight directly correlates to her worth as a person. Her weight isn’t commented on during her time on Earth; her new friends help her find fun clothing that shows off her figure. Here she gets to not just be Black, not just a Black woman, not just a queer Black woman, but a fat queer Black woman. She carries all of those identities at once. It’s not that Earth is presented as an ideal or that bigotries and prejudices are ignored, but that Dow frames it so the reader can see Earth as a place with potential to be better.

The Kindred snuck up on me. I was expecting a heavy sci-fi drama and instead got a story full of joy and hope. It’s the kind of story where teens who never see themselves on the page will walk away feeling validated and teens who always see them­selves on the page will have a better understanding of other experiences. It was so good, I can’t wait to go back and read The Sound of Stars.