The Locus Bestsellers for December include top titles Project Hail Mary by Andy Weir (Ballantine), Dune by Frank Herbert (Ace), The House in the Cerulean Sea by TJ Klune (Tor), and Starlight Enclave by R.A. Salvatore (Harper Voyager US).

On the hardcover list, Project Hail Mary by Andy Weir remained at the top with a decisive victory over Joe Abercrombie’s The Wisdom of Crowds, book three in The Age of Madness series, in second place. There were no new runners-up. We had 45 nominated titles, down from 50 last month.

Thanks to the movie, Frank Herbert had a good month. Four of the six Dune books he authored appeared on the paperback list, with Dune taking first place. Second place went to Robert Jordan’s The Eye of the World. There were no new runners-up. Fifty-five titles were nominated, down from last month’s 60.

The House in the Cerulean Sea by TJ Klune remained at the top of the trade paperback list, with a slight lead over Frank Herbert’s Dune. There were no new runners-up. There were 55 nominated titles, up from last month’s 52.

On the media- and gaming-related list only two books received enough votes to be listed – first place went to Starlight Enclave by R.A. Salvatore, the first novel in a new Drizzt series, and Timothy Zahn’s Star Wars: Thrawn took second. There were no new runners-up. We had 20 nominated titles, the same number as last month.

This report and more like it in the December 2021 issue of Locus. 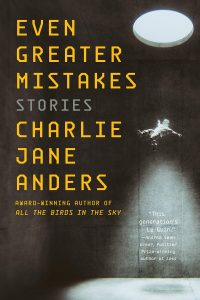 DEREK STÉPHANE KÜNSKEN was born March 13, 1971 in Cobourg, Ontario, Canada. He attended the University of Guelph as an undergraduate and earned a master’s degree in molecular biology at McMaster University, but he left science behind to work with street children in Honduras. After returning to Canada he worked various jobs until he joined the Canadian Federal Public Service, working on refugee and diplomatic postings in Colombia and Cuba.