What was your introduction to science fiction and fantasy art? What influences drew you in?

It’s a genre that has always simply slotted into my life and perspective. When I was 13, I fell in love with the art of Luis Royo and H.R. Giger, discovered after a long seclusion. I was born and lived off the grid for most of my childhood, was homeschooled all my life, and we didn’t have electricity for TV, so all I knew were fairy tales and books. The dark art of those two masters influenced my perception on reality. 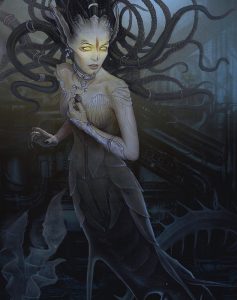 Sci-fi and fantasy art just felt natural, and became an organic way of telling my story and revealing the way I see the world, and all that hides within. Imagi­nation has no boundaries, and that limitless sense of possibility became reality in my mind.

Since the world around me was dominated by sets of strict rules and norms, there was no other way for me to be free, except creating a land of infinite possibilities. Science fiction and fantasy just fit into my every day, as breathing does – as dreaming does.

Talk a bit about one of your most interesting proj­ects. What’s it like to illustrate an author’s work? How do you engage with the work and make it your own while still honoring the source material?

My most personal artwork and stories are about the characters who come from my own worldbuilding, and are like friends to me – they have grown with me in ways so personal and intimate. When I work on them, reality takes on brighter colors, and I immerse myself so deeply in the stories and characters and their worlds that it’s hard to come back to this world.

When I work for clients, something similar hap­pens, sometimes – it all depends on whether the character and story resonates with my own world. Sometimes they are just work; I investigate, I make references, I read about the setting and characters to build the mood, but it’s more superficial. There are other times when something about the charac­ter just clicks, and it’s like diving into deep water, flooding my mind with something totally new and unpredictable – with characters and stories that have their own life and temperament. Last year I did a commission that turned into a whole branch of my main fictional universe. I finished it, in two days, and shortly afterward, the artwork was nominated for a Chesley, and won. I was the first Mexican woman to win a Chesley Award, and it all came out of a small, commissioned artwork from a collector. The piece is called “Gyhan akaii dannan Deli Iatt” – “She who sits at the end of the world upon a mountain of bones dreaming.” Sometimes the story I tell myself is very different from the idea the client had, and sometimes it›s similar. The work takes on a reality and a living essence for itself. I find this to be one of the most important aspects of creating.

Tell us about your favorite art process or pro­cesses! Do you use digital media in your workflow?

Most of my work is traditional. I find a special and intimate beauty in the relationship between myself and the materials I use – the paper, its texture, the humidity, my other components. There’s also unpre­dictability, a margin of error, and even mistakes that sometimes bring about totally new results.

I also do digital drawing. I have two Wacom Cintiqs, one for traveling and one at home, and I use those for more complex or fast commissions, and sometimes for sketching. Recently, while working on a graphic novel, I decided to do it entirely digitally, giving a more futuristic cyberpunk vibe to the line and color. I use brushes and textures that simulate traditional work sometimes. I find both traditional and digital approaches equally complete and functional.

How do you keep art fresh for yourself and keep learning new techniques and improving your craft?

I’m a bit of a challenge junkie. I enjoy pushing my own boundaries, sometimes accepting tight deadlines, and other times accepting very challenging and new work I have no idea if I’ll be able to accomplish. If I like the project, and have the availability, I’ll say yes to things even though I have no idea how I’m going to do them. I know other people can do it, so I can too – I just need to know the method, the formula, and the practice. That’s how I began drawing seven years ago. I had no idea how good I was, or if I could do it professionally – I just began because art was something I’d always been passionate about, and it just seemed the right thing to do. I started with a paper and a pencil, and slowly added more materials and techniques until I understood what I was doing.

Is there one thing you wish you could have learned early on from someone experienced in the field?

Yes, totally. I wish I’d begun earlier. I started drawing when I was 23. From the age of 16, I had to work to pay the bills for my family, so there was no time for anything else, really. Everything I did was for my mom and my brothers, but I was slowly was saving up. After seven years, I had enough saved to quit my job and dedicate my time to drawing. I found a whole world I didn’t even realize existed. I went to my first comic convention when I was 24, and my mind was blown. I was so damn excited. I’d found what I wanted to be: an illustrator! Three months later I had my own table at the largest convention in Mexico, and since then, I’ve never looked back. It’s been wild!

One thing I would have wanted to know earlier was how to make connections with my fellow artists, and to just follow my dreams and draw.

Any upcoming projects you’d like to tell our read­ers about? 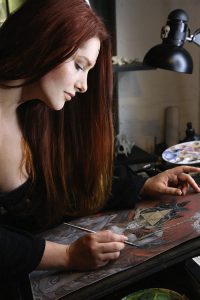 This year and last year has been really wild, with lockdowns and all the events being cancelled. I’ve gotten accustomed to the isolation, even more than before. I invested this past year into construction and remodeling, making my “Farrland” (as I call my studios) into my dreamlands. I’ve been travel­ing between México and California working on my studios, while constantly on multiple deadlines, including cyberpunk graphic novels and dark fantasy and sci-fi covers, while at the same time keeping of the social grid as much as possible.

My first show in nearly two years will be at the San Diego Comic-Con Special Edition, November 26-28, 2021. It’s a little overwhelming, more so because it was totally unexpected. I’m currently preparing for that show and trying to keep as calm as possible. Doing events in USA is still very new to me, so it will be a challenge, but I’m excited, and can’t wait to begin putting everything together.

Thank you so much for letting me give this insight into my world and creative process, and to share my experiences. I want to inspire other little girls into following their dreams, as the works of Royo and Giger inspired me. They showed me a path of light from the darkness, and inspired me to see the world through the eyes of creativity and imagination. That’s the most valuable part of all!

Tehani Farr is a British-Mexican artist. Her work merges the power and richness of tradi­tions from her Mexican ancestry with myths and legends from old Europe. She is a former student of graphic design and a professional model since 16, who has spent her life traveling between two continents. She became a professional illustrator in 2014, and soon left modelling to focus on art. She has worked for World of Warcraft, Puma, Sony Enter­tainment, Playboy, E Entertainment Television, and more. Today she does cover design, graphic novels, editorial art, festival art, concept art for movies, branding, artwork for festivals, and music industry merchandising illustrations. She regularly travels with her artwork to exhibitions, festivals, conven­tions, conferences, and workshops around the world. 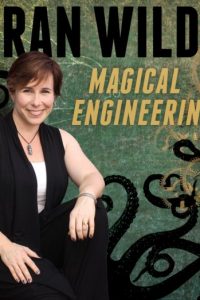 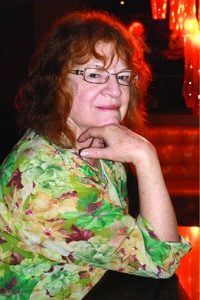