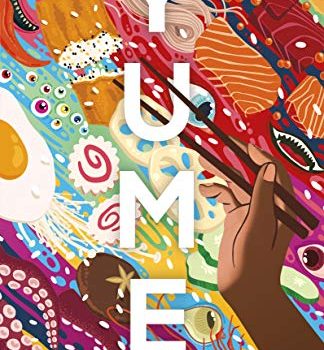 Contemporary fantasy novel about a Canadian woman teaching English in a small city in Japan, who gets caught up in supernatural chaos.

Baker, A. Deborah: Along the Saltwise Sea

Written by Seanan McGuire. Middle-grade fantasy novel, the second book in the Up-and-Under series begun in Over the Woodward Wall—the book-within-a-book from McGuire’s Middlegame. Avery and Zib must work on a pirate queen’s ship, sailing for lands unknown.

Historical fantasy novel, the first in the eponymous duology. Ren Scarborough is Half British Reaper, half Japanese Shinigami. She is forced to flee London and goes seeking acceptance in Japan.

Alien conquerors resettle humanity on a planet with limited inhabitable zones. Three interwoven stories explore the violence and conflict of their situation.

Mix of non-fiction, folk tales, and ancient legends, from around the world to modern times, including literary examples like excerpts from Edmund Spenser’s The Fairie Queen, John Milton’s Paradise Lost, and clippings from early American newspapers. First time in English for 20% of selections. All entries include context and commentary from the editor, who is a professor of medieval history.

A mysterious former Sith wanders the galaxy in this original novel inspired by the world of The Duel from the Star Wars Visions animated anthology.

Young-adult post-apocalyptic SF novel. Paige Miller wakes in the hospital and discovers everyone else in town, perhaps everyone in the world, is dead.

Fantasy novel, the second in the Rooks and Ruin trilogy, set in the same world as the Swords and Fire trilogy. The Door in the black tower has opened, and demons walk the world. Ryx will have to sacrifice much to stop a new artifact that can wipe out all life.

SF novel made up of interwoven stories, about a cabinet filled with files on the “symptomers,” humans whose strange abilities and bizarre experiences might mark the emergence of a new species, and the harried office worker who manages it. Translated by Sean Lin Halbert from the Korean.

Maguire, Gregory: The Brides of Maracoor

Literary fantasy Oz novel, the first in a new series spun off from The Wicked Years series, featuring Elphaba’s green-skinned granddaughter Rain, who washes up with amnesia in Maracoor, where there must always be exactly seven exiled brides—and her arrival upsets everything.

Horror novel. A small town in Michigan has a telepathic pig that can control human minds, and drive them mad with hallucinations.

Best of the year anthology, the seventh in the series, with 20 stories from 2020. Introduction by Roth; foreword by series editor John Joseph Adams, who also provides his own list of notable stories.

Fantasy middle-grade novel about a boy who loses his favorite toy, and its replacement—the Christmas Pig—has a daring plan to find it, requiring a magical journey. Illustrated by Jim Field.

Verble, Margaret: When Two Feathers Fell from the Sky

Fantasy/horror novel involving Two-Feathers, a Cherokee horse-diver and her friends at a zoo in 1926 Nashville, as they try to understand what is causing the zoo to be haunted.

Cynthia Sheppard has been creating artwork for books and games since the mid-2000s. Her illustrations are inspired by a late 19th-century realist painting and modern fantasy art, with a focus on emotional resonance and visual storytelling. She’s currently a senior art director at Wizards of the Coast, where she create worlds and has commissioned over 2,000 illustrations for the card game Magic: The Gathering. She told us, “If I’ve ever