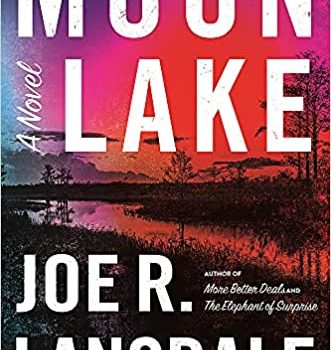 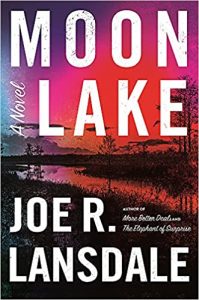 Joe R. Lansdale is a masterful storyteller with a distinct, often drawling voice. His novels are vivid yarns that connect with the reader faster than greased lightning. Set in the fictional town of New Long Lincoln, East Texas, Moon Lake begins in 1968 – just past the “time when cars were big and the American dream lay well within reach for just about anyone white and male and straight who wanted to reach for it. All others, take a number and wait.” Fourteen-year-old Daniel Russell’s father has hit rock bottom. His wife, Daniel’s mother, has abandoned them, and they are living out of his Buick. His “solution” is to take his own life and that of his son by driving off a bridge into the titular lake. Daniel survives thanks to the heroic efforts of young Veronica “Ronnie” Candles and her father. He winds up living happily with the Black Candleses for a few months, but eventually must go to his maternal aunt. A white boy growing up in a Black family in 1968 Texas is just not acceptable.

Ten years pass. Daniel, now a nascent novelist and journalist, is notified that his father’s car and his remains have finally, thanks to a lake-draining drought, been located. He returns to New Long Lincoln and the once-again-visible town of Long Lincoln that was intentionally inundated years before to make Moon Lake. (It’s a practice that is not particularly unusual: hundreds communities in the US have been vacated and flooded to make way for dams and reservoirs.) Daniel and Ronnie, now the town’s first Black female police officer, discover that much more than evidence of his own personal trauma has been revealed by the drought. Daniel uses his investigative skills and a knack for getting in touch with his subconscious via dreams to find the grim truth about dark deeds and the twisted existence of the town and its residents.

A cast of superb supporting characters is a Lansdale trademark, as is a mix of piquant banter, wry humor, folksy phrasing, immense original­ity, and immaculate prose. So is his proclivity to investigate relations between the races and the general Texas cultural milieu. Moon Lake doesn’t disappoint in any of these aspects.

There’s plenty of sordid stuff going on in New Long Lincoln, but nothing supernatural in this straight-out thriller. Daniel’s dreams about his father’s ghost, however, come mighty close to it.

One mark of a good book is the staying power of characters well-crafted enough to live on in a reader’s imagination long after closing the covers. Ronnie Candles, in particular, resonates. She and Daniel manage an interracial relationship in 1978 Texas, but due in part to her offstage police work it gets short shrift in the novel. So, too, do her true feelings. What she describes to the white male protagonist and thus is received by the reader is, of course, coded. One can’t help but wonder what the whole story – and her life – might look like from her point of view now, over 40 years later.

Moon Lake may not be Lansdale’s very best novel, but it definitely ranks high on a list that includes The Bottoms and The Thicket. And that’s high praise indeed. 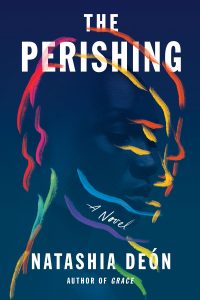