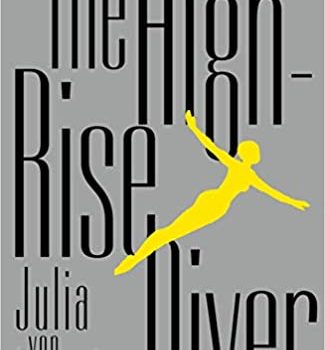 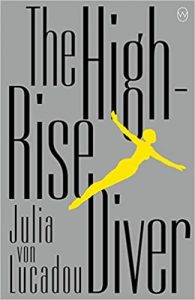 In Julia von Lucadou’s dystopian novel, The High-Rise Diver (translated from German into English by Sharmila Cohen), a psychologist, Hitomi Yoshida, is assigned to assess Riva, a professional high-rise diver (she literally jumps off skyscrapers). The latter has abruptly broken her contract with her employer. This is a shocking development, partly because Riva is an elite diver with a whopping fanbase, but mainly because those unwilling or unable to work, no matter how talented or popular, are expelled from the city to the impoverished and polluted streets of the peripheries. Hitomi’s task is to understand why Riva walked away from such a bright ca­reer, why she now sits in her apartment, silent and withdrawn, refusing to communicate with her boyfriend. The wrinkle is that Hitomi does not have direct access to Riva. She is forced to analyse the athlete’s condition remotely, relying on cameras secretly placed throughout Riva’s apartment. With her boss breathing down her neck and no breakthrough in sight, Hitomi grows all the more desperate, fully aware that her career and residency in the city is on the line.

Despite back cover blurb comparisons to The Handmaid’s Tale and Brave New World, The High-Rise Diver bears a stronger resemblance to the dystopian fiction published in the last couple of years. For example, both Lavanya Lakshminarayan’s Analog/Virtual: And Other Simulations of Your Future and Micaiah Johnson’s The Space Between Worlds feature societies where the rich and poor are physically divided – either by a wall or an electric shield – and where the threat of deportation hangs over those who underperform. Likewise, the branding and trademark of every product or device Hitomi interacts with is reminiscent of Qualityland by Marc-Uwe Kling and Zed by Joanna Kavenna. This isn’t to say that The High-Rise Diver is a rehash of what’s come before; it’s worth noting that, aside from Qualityland, the novel’s German publication predates the examples cited above. Instead, these similarities in recent dystopian fiction speak to a broader, global concern about late-stage capitalism and the disastrous fallout of neo-liberal policies over the last three decades.

In a brief video for her English language publisher, World Editions, von Lucadou speaks personally about the demands she put on herself, in the name of “self-optimisation,” while working for the film and television industry. Like Riva, von Lucadou walked away from that life, but rather than sit in her apartment, she started work on The High-Rise Diver. Her debut, though, is more than just an act of catharsis, a pale reflec­tion of what she experienced at work. Hitomi is a confronting representation of self-exploitation, an extreme example of someone who entirely judges their self-worth on their productivity and value to society. From the moment we meet Hitomi, she is well past the stage of burn-out. And yet, aside from one awkward date – which she treats like a job interview – Hitomi fills her waking hours by working, whether it’s obses­sively monitoring Riva or improving her profile as a psychologist by taking calls from clients on “Call-a-Coach.” Throughout the novel Hitomi’s overbearing boss provides cruel “guidance” that she “take better care of [herself]. Meditation, relaxation, exercises. Conscious breathing. Avoid noise.” Cruel because they both know that Hitomi doesn’t have time to breathe, let alone meditate, but also because her boss adds mindfulness to the tasks Hitomi needs to complete. I found this attitude toward Hitomi’s welfare, treating mental health as a box-ticking exercise, horribly familiar.

However, the most unsettling aspect of The High-Rise Diver, of which all the other issues in the novel circle around, is Hitomi’s non-relationship with her wealthy, elite, biological parents. Like all privileged children, Hitomi is deposited in a city-home where she’s trained to be a productive citizen. On reaching adulthood, though, Hitomi is rejected by her parents for not meeting their expectations. As we flashback to these moments, it becomes all too clear that aside from one teenage friend – a relationship that ends suddenly when her companion, suffering from mental health issues, is exiled to the peripher­ies – Hitomi has rarely experienced intimacy, and certainly not the loving embrace of a parent. In a society that has no time for love or comfort, Hitomi fills this emotional void by checking out the images and videos posted on a blog of a “biofamily in their apartment. Eating, cooking, cleaning and talking” and, when she can’t sleep, listening to the platitudes provided by a parentbot set to “mother.”

As much as The High-Rise Diver presents a cautionary tale of a society in thrall to corporate and surveillance capitalism, it’s also a distress­ing portrait of a woman, bereft of familial and physical affection, searching for meaning in a cold, antiseptic world. 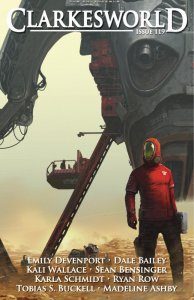