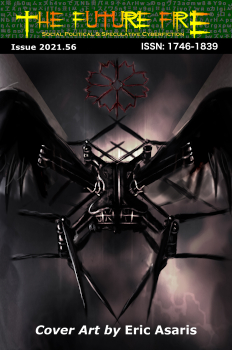 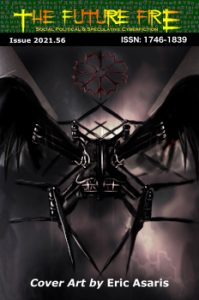 Beneath Ceaseless Skies continues going strong this spring with stories such as Cat Rambo‘s “Every Breath a Question, Every Heartbeat an Answer“, set in her Tabat universe. Lady Callynahdra is a centaur who rejected her default fate as a noble and instead earned the rank of sergeant in the military. Now she’s recuperat­ing in a convalescent hospital after surviving a particularly brutal mission. She befriends a Rose Knight who appears fully retired, but might be an agent working against the increasingly cor­rupt Emperor. This is a long, measured story that really functions as a lacuna between two halves of a larger narrative. I don’t know if those other halves will ever exist, but I’d love to read them; as it stands Callyn does a lot of growing and healing in the space of this story of pause, resistance, and the language of flowers. Also fol­lowing a military campaign is “The Captain and the Quartermaster” by C.L. Clark, the story of a romance between the two titular characters, Maeb and Jissia, and how it arises because of a civil war, evolves as the war drags on years longer than the months originally anticipated, and has to evolve again as the war potentially comes to an end, one way or the other. The story bounces around in time but keeps its focus, and along with the romance I appreciated how it highlights the importance of logistical officers to any army, supporting the heroic command­ers. A very different military officer features in “The Colors of Sand” by Anna Winterstein. Here the romance is between Bas’hai, a Shashti with the Sight (and little voice) and Mele’san, a Lashti with the Voice (and little sight). Bas’hai is a sentry, always looking for an invading force that they believe will eventually come through the deadly desert to attack their city. When she sees signs of that force it is a struggle to get the government to believe her, but eventually they set up a long-planned trap for the invading forces. As the battle commences Bas’hai has to quickly reevaluate her entire understanding of the rela­tionship between her people and the invaders, while Mele’san has to fulfill her Lashti role no matter what. It’s always interesting to see char­acters’ understanding of their own world change and shift along with our own in the space of just a few thousand words.

The odd one out is “Concerto for Winds and Resistance” by Cara Masten DiGirolamo. In­stead of a military outfit here we get the dynamics of an orchestra under a new conductor. They’re having to function in a society ruled by a paranoid Dictator, one who had the previous conductor arrested just for complaining about drought con­ditions. The timpanist is a government informer but is becoming genuinely attached to his fellow orchestra members. The trumpeter is from the country that’s now under siege by the Dictator’s forces and he has no idea how his family has fared. We meet several characters, each fleshed out with their own quirks and secrets, and we get hints that the right music played in the right way can sometimes have magical effects, called incenti. Is that what the new conductor has in mind? The story was completely engaging, but I felt that the ending totally lacked any payoff to all the build up – this is one of those stories that just stops without giving the readers an emotionally satisfying resolution. The writing is very well done and the characters unusually strong for a short story, but I was left feeling really unsatisfied.

In early April Tor.com has “Annie Without Crow” by Michael Swanwick. Full of Swan­wick’s trademark panache and love of anachro­nisms, this story mashes up Lady Anne, who’s had enough of Crow’s trickery, her magical demesne where she can (mostly) ban men and move its borders where she will, her anger at not being invited to the baby Queen Elizabeth’s christening, a very young William Shakespeare rescued from likely death, Anne’s curse to the world, and vari­ous gods and demigods trying to thwart her will. From motorcycles to Sarsen stones to cursing, there’s nothing about this that isn’t entertaining.

The Future Fire put out their first issue of the year in January with a flash piece and two nov­elettes. The flash is “Gendered Anatomy” by R.E. Andeen in which Cam is a tech entrepre­neur doing a public product launch by literally stripping naked to demonstrate UMod System One, a body modification technology that can let someone’s gendered embodiment match their self-identity moment by moment. Cam is un­derstandably incredibly nervous but has a very supportive partner in Lore. The first novelette is “k.a. (birthright)” by Lam Ning. In a war-torn country, M. is a medic and Yang, the narrator, is his driver. They’re both completely shaped, and warped, by their interactions with a cruel, brilliant woman who was a warlord’s daughter, now believed to be dead. They’re doing their best, working together and hating each other in equal measures. This story has many layers of trauma and is not a comforting read, but is very well told. Finally we have “The Listener” by Sim Kern. I have to admit to bias here because the story is firmly rooted in late 2000’s (2008-2009) Houston TX, which includes the time when I lived there. Kern captures the sense of place perfectly in telling the story of Jane, a lesbian teenager rebelling against her super Christian mother. After tripping on way too many shrooms, Jane starts being able to hear trees, which is no blessing in a city suffering from drought. She moves to Arizona to get away from them, but the story kicks off with an invitation to a family wedding back in Texas. It’s a solid story with the fantastic element played with excellent extrapolation.

Lightspeed‘s science fiction section in April kicks off with “The Equations of the Dead” by An Owomoyela, a short novelette. On a far-future space colony the Old Man is the power behind everything and Harmless is one of his most trusted lackeys. When Harmless trips across Lat in a park, sending messages to the banned artificial intelligences elsewhere in the solar system and actually receiving responses, he knows this is something the Old Man will want to hear. Mayhem ensues, all described with Harmless’s distinctive narrative voice, and in the end nothing will quite be the same. Rich Larson gives us “The Complete Exhaustion of the Organism” in which Jain and Stromile are wandering through a post-apocalyptic landscape. They’re not alone though: some entity keeps dropping items in their path, most recently an incubator with a seemingly human baby inside. They, especially Jain, keep rejecting it, but it reappears every day. They finally open it up and name the baby inside Taco. Taco’s evo­lution is clearly not naturally human, and Jain has a number of decisions to make as Stromile’s wasting illness consumes him. This is a weird story on several levels.

I have been meaning to check in on Escape Artists for some time, and I finally got a chance. This venue, or combination of venues, publishes original and reprinted short fiction in audio and print. The three separate areas are Escape Pod for science fiction, Podcastle for fantasy, and Pseudopod for horror. As I checked in during March, both Podcastle and Pseudopod had origi­nal stories – I read them in print since I wanted to encounter them the same way I do the other sto­ries I read. Sarah Day‘s “Keeping House” from Pseudopod is an effective horror story about a couple, Lydia and Matt, moving in together and renting a house for the first time. The house seems nice enough, but the basement is decidedly creepy. They move in and Lydia has her hands full trying to get everything squared away and keep up with the housework while Matt seems apathetic and unconcerned. He even suggests she take time off work if the housework seems too demanding. She starts having strange dreams about previous inhabitants…. The point about domestic labor trapping women is well taken. From Podcastle, I read “Circle of Memories” by Jessica Meats. In this world magic is powered by sacrificing memories, and Cara wakes up in front of a witch with a powerful amount of stored magic and no memory of why she came there. The witch, Elner, offers to let her stay, and they slowly fall in love. Elner has really been messing with her own memories to keep powering her magic, and that only gets worse when she goes to assist the healers in a plague-stricken town. Cara and Elner sacrifice a lot for each other, and the ending is touchingly poignant.