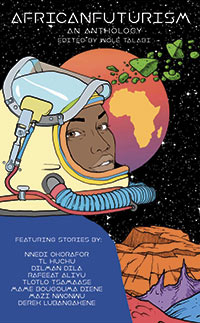 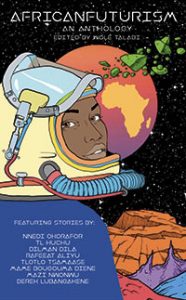 It’s a little surprising to realize that it’s been more than a quarter century since the term “Afrofutur­ism” was coined by Mark Dery, and at least a couple of years since Nnedi Okorafor coined “Af­ricanfuturism” to describe more Africa-centered SF (the jury is still out on whether her parallel term for fantasy, “Africanjujuism,” is going to catch on). They’re both very useful terms, and my only discomfort with them has to do with the root, not the prefix: the slightly archaic “futurism” seems to me to describe only a sliver of what SF/F does. Okorafor’s original blog post on Africanfuturism is included as a preface to Wole Talabi’s Africanfu­turism: An Anthology, a free download from the online literary magazine Brittle Paper, which includes eight original stories that together provide a more useful sense of the concept than any critical essay or manifesto is likely to produce. It’s a pretty modest anthology by most standards; none of the stories are more than 10 or 15 pages long (frankly, something of a relief in an era in which short sto­ries too often metastasize into novellas), but none are trunk stories, either (for those among you who might distrust the idea of any free book that doesn’t have a catch). It’s a solid anthology. While many of the contributors may not be widely familiar to most readers, nearly all were profiled by Geoff Ryman in his landmark Tor.com/Strange Horizons series on African SFF writers, and several have published in venues as Lightspeed, Interzone, Uncanny, Clarkes­world, and Fiyah.

One value of an anthology such as this is that it challenges the unfortunate tendency to view “African SF” as somehow monolithic; the cultural and even linguistic differences among the tales remind us (or perhaps begin to teach us) that SF from Zimbabwe or Nigeria isn’t the same thing as SF from Botswana or Uganda or Senegal. The lead story, T.L. Huchu’s “Egoli”, presented as a second-person narrative about an aging Shona grandmother whose grandson has just left on an interplanetary mining expedition, makes a pointed contrast between the village life she still values and the changes she has seen wrought through technology, from the early days of hearing the BBC World Service on a single radio to the smartphone which fundamentally changed her life. The juxtapo­sition of a nostalgic past with an invading future is almost Bradburyesque. By contrast, Dilman Dila’s “Yat Madit” seems to reflect more recent Ugandan history, as the protagonist’s father, a corrupt former president whom she barely remembers, is released from prison after 30 years and asks her to use her on­line skills to help him relaunch his career in a society in which an elaborate system of online avatars (called Yat Madit, or “big tree,” after an earlier tradition of community gatherings) is designed to prevent exactly the sort of corruption that had sent him to prison in the first place. Perhaps the most brutally powerful tale here, “Behind Our Irises” by the Motswana writer Tlotlo Tsamaase, is a corporate nightmare in which employees of a multinational firm, to avoid losing their much-needed jobs in a challenged economy, are required to have technology installed in their bodies that effectively prevents them from resisting even sexual abuse while their cultural knowledge is mined for profit – the notion of capitalist plunder taken to the level of body horror. It recalls aspects of both the movie Get Out and Ellison’s “I Have No Mouth, and I Must Scream”.

Only two of the stories are set off-Earth. Derek Lubangakene’s “Fort Kwame” deals with a failed rebellion in the orbital city of Fort Kwame, one of a number of such cities which remain anchored to the increasingly uninhabitable surface, while Mazi Nwonwu’s “Rainmaker” is set on a fairly hostile planet appropriately named Arid, which has rich soil but is plagued by dust storms. A young man chal­lenged to perform a traditional rain dance appears to succeed – although he’s reminded that an orbital shift might account for the sudden downpour. It’s one of the few tales that seems to leave room for a bit of magic (Okorafor’s Africanjuju, I suppose). A plague of infertility threatens the population in Rafeeat Aliyu’s “Fruit of the Calabash”, whose main character runs an ectogenesis lab of artificial wombs; when the fetus of an influential senator fails, her assistant calls in a wise woman called a scibalawo, who informs her that it’s a spirit child who needs “more than your machines to enter this world.” The dried-out world of Mame Bougouma Diene’s “Lekki Lekki” seems to have found a means of salvation through “soul engines” installed in giant trees, which “parse out our human consciousnesses and pulse them into the network,” which sounds to me less like technology than Gaean mysticism. The lightest story is Okorafor’s own “Sunrise”, which playfully juxtaposes the minor irritations of being a celebrated Nigerian-American SF writer with the mixed blessing of an AI companion – automatically downloaded as a perk on a Google Airlines flight which also featured a transparent air­craft – which creates some family chaos by speaking up at inopportune and unexpected times. It’s a lot of fun, and a reminder not only of Okorafor’s versatil­ity, but of the lively variety of the whole collection.