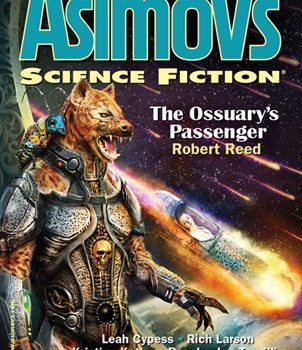 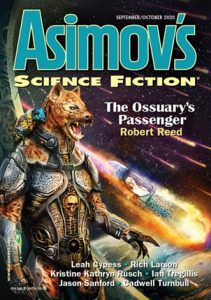 Asimov’s September-October issue is, as usual, “slightly spooky.” Among the “spooky” stories I particularly liked were Michael Libling‘s “Robyn in Her Shiny Blue Coffin” and Gregory Frost‘s “Traveling On“. In both cases the protagonists are missing some­one important to them and hoping for a message from “beyond.” In Libling’s story young Jerry’s friend Robyn, an aspiring magician, has died after a long and mysterious illness, but she promised to (magically) contact him from the afterlife. The bulk of the story concerns their friendship, which really only blossomed in the hospital. The story comes off for a while as kind of John Green ter­ritory – and well done – but on Jerry’s graveyard visit after Robyn’s burial there is a beautifully set up fantastical twist. In Frost’s story Earl is one of those who wasn’t “raptured,” but his wife was… leaving no message (it seems most of those who left loved ones did leave an indication.) Earl is a bit messed up (trailer trash would be the unkind term) and the story nicely captures the Southern ambiance, post-Rapture as the survivors try to carry on with things like Earl’s AA meetings continuing. Very nice, gently funny work, with a well-turned, rather moving conclusion.

Also enjoyable was Cadwell Turnbull‘s “Shock of Birth“, about a man who is convinced he’s in another body – perhaps another world – than his true body. His therapist is skeptical, of course, and the other patients he meets don’t seem helpful… but as the story goes on we realize he may be right after all! Neatly done. There’s also the latest of R. Garcia y Robertson‘s stories about a rebellion in the Outer Solar System led by teenage girls. “Escaping Real Time” focuses on Commander Colbert of the Earth Navy, whose sympathy for the rebels (not to mention physical attraction to them) has been demonstrated earlier in the series. This time he is tasked with escorting a captured rebel to prison, but something else is going on, and soon he’s trying to help rescue a brilliant scientist, who may have the secret to FTL travel, from the baleful AI controlling Jupiter sys­tem. This is all lighthearted, not quite believable stuff, but quite fun.

The standout this issue, however, is “When God Sits in Your Lap” by Ian Tregillis. Like Tregillis’s “Deus ex Machina” from F&SF last year, it’s related to an earlier novel (Something More than Night in this case) and it’s evidence that I (perennially behind on my novel reading) should look up Tregillis’s longer work. This piece is told from the POV of a fallen angel in a noir­ish Los Angeles (think Raymond Chandler). We meet our (anti)hero in a bar, of course, “jammed to the gills,” as he is offered a job by a some­what shady-seeming man, one Tom Darlington. The man wants the angel to use his glamour to persuade his mother that her new boyfriend is bad news. Against his better instincts, the angel (calling himself, significantly for fans of ancient crime fiction, Philo Vance) takes the job and, to no reader’s surprise, finds Darlington’s motives are far from clear and that something much more sinister is going on with the very rich Myrna Dar­lington – presumably related to the war in Heaven that appears to have started. The resolution of the central plot is well handled, if pretty much what we expect for a noir story. What makes the story sing is the style – snappy noirish narration, stuffed with snarky metaphors, perhaps more Damon Runyon than Raymond Chandler, and very funny. The story’s theme is darker than its tone, and the ending is powerful and moving.

Analog‘s cover story for September-October is “Minerva Girls” by James Van Pelt. This another take on the Rocket Ship Galileo trope where kids build a spaceship in the backyard (sort of), as used by James Blish and John Varley. Van Pelt’s kids are the “Minerva Girls” of the title: Jacqueline (the genius), Selena (the builder), and our narrator, Penny, the pilot. They are fast friends, all somewhat isolated from their schoolmates, so when Jacqueline suggests they can make a space­ship that will go to the Moon, they go for it. That’s not the key to the story, of course…. The story is about the girls, their characters, their relationship – and the prospect that they will lose each other as two of them have to move away. I believed all that – and so I was touched by the ending, which suggests another use for the magic tech they used for their Moon voyage.

The big novella this issue is “Draiken Dies” by Adam-Troy Castro, which, as the title (maybe?) suggests, closes off a significant narrative arc, though it certainly doesn’t preclude more stories in the same milieu. It’s told from the POV of Draiken’s sometime-sidekick, sometime-lover, sometime-bodyguard Delia Stang, who is being interrogated by a man from an organization that she and Draiken had previously interfered with, and apparently hoped to neutralize. We soon realize that they want to know what she did with Draiken – which is simple: she killed him. In flashbacks, we learn about Stang’s recent history on the pretty hopeless dump of a planet where she’d been captured, including her rescue of a local girl from the clutches of a small-time thug and rapist. And the interrogation continues…. Of course this is leading in a particular direction, and it gets there entertainingly. There is some well-handled action, and a bit of a twist at the end. It’s satisfying enough, though not, I think, as strong as several of the earlier Draiken stories (which are among my favorites among Castro’s body of work.)

Finally, there’s a story I didn’t expect to like as much as I did, “The Home of the King” by Dan Reade – a future boxing story by a name I didn’t recognize. It’s told by a sports journalist who has forged something of a friendship with Barry McClintock, an excellent boxer who was seriously injured years previously and is making a comeback after a process called “reskinning,” essentially regrowing one’s body. So the “new” Barry McClintock is able to box again, but, the narrator asks, is he really still Barry McClintock, without his scars, without his pain? And this means something to the narrator, a gay man who has had his share of physical and mental pain in the past. It’s one of those stories that quietly con­templates a difficult question, partly through the lens of well-depicted characters, and that doesn’t really come to an answer. Not a wowser of a story, but a fine, thought-provoking effort.

Uncanny in September-October features a very nice story by a writer new to me, Jordan Taylor, whom I saw again this month! “The Nine Scents of Sorrow” is about a parfumier to the Queen of France who goes by the name Monsieur Fargeon. Their name is actually Sorrow, as we learn, and their gender one of their many secrets. The story tells of their strange origin – are they the child their mother died bearing, or are they born of the pistol their parfumier father intended to kill himself with after his wife and child died? He raises Sorrow as a girl, but Sorrow learns his secrets, which become Sorrow’s own…. This is a strange and lovely weird tale.

I also liked Mari Ness‘s “The Ruby of the Sum­mer King“, another strange and lovely weird piece, with very much the flavor of a fairy tale. The Summer King falls for the Winter Queen, but of course it is very difficult for Summer to meet Winter, and very dangerous. But he makes the journey, with the help of the likes of November, and presents the Queen his ruby…. Alas, Summer and Winter perhaps are not really a proper match!

Curiosities is a magazine devoted to steampunk that I had not seen before. Its seventh issue is dated “Quarantine 2020” and the stories are mostly quite enjoyable. Perhaps the most ambitious is “The Mir­ror Crack’d“, by Jordan Taylor, whose Uncanny story impressed me. This is an Arthurian-ish tale about a young woman with magical talent who, unable to be what she’d really like (Scotland Yard magician), becomes magical tutor to a girl in Corn­wall, where Camelot was said to be. (Their names too are significant: Elaine and Morgan.) Elaine’s job is to help Morgan harness her dangerous talent, and all this is interesting, and the writing is fine, but I thought the plot kind of lost its way towards the end, turning on a reckless quest for the Grail, and a possible door to Arthur’s time.

Gwen Katz‘s “Seven Cups of Tea” is a nice steampunkish retelling of Andersen’s “The Wild Swans”, telling of a young woman’s quest to re­deem her transformed brothers as their country is struggling to overturn an oppressive government. “A Rainy Day at St. Bartholomew’s” by Philip Brian Hall features one Constable Smithers and his Scotland Yard boss Sergeant MacAndrew investigat­ing the theft of the lead from the roof of the title church, and finding something both stranger and less sinister than they feared. I liked it, but thought MacAndrew’s “crime” solving a bit too convenient. My favorite piece might be the first, “The Death Trade” by Natasha C. Calder, for its image of embodied “deaths” that people carry with them, and the danger of the title trade, shown as the protagonist, Ada, makes a deal to lend her death to a man clearly about to die.

Flyaway, a new novella from Tor.com Publishing, is the longest fiction yet from Kathleen Jennings and, appropriately, is illustrated by the author. This is a striking and almost unexpectedly dark story. It’s set in rural Australia in a town called Runagate. The main character is a young woman named Bet­tina Scott, who has a delicate and rather smothering mother, and whose father disappeared under mysteri­ous circumstances three years earlier. Her rather wild older brothers also ran off, and she has spent that time conforming more and more closely to her mother’s expectations. But we gather early on that she’s by nature much wilder, and as we learn some very odd stories from the past (strange beasts, shapechangers, crimes undetected), Bettina – or Tina – is finally lured to escape and to try to find her brothers and her father, along with two other locals with their own issues; and where they end up is deeper and weirder than we can expect. Another excellent outing from Kathleen Jennings.