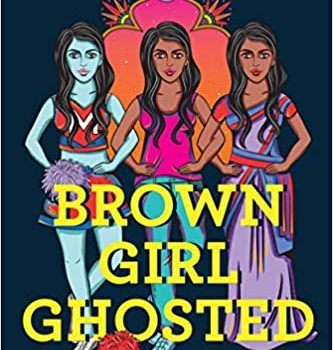 As Brown Girl Ghosted opens 16-year-old Violet Choudhury is dealing with some very typical high school drama. An accepted member of the POMs, she is fitting into her Midwestern town in the most traditional of teenage ways: anchoring the cheer pyramid, at­tending the occasional party, getting into just the right amount of trouble, and determinedly staying under the radar in the classroom, the cafeteria, and at every single school-related event. Violet has managed to excel at being average, which is pretty impressive when you consider the fact that she is pretty much the only Indian-American teenager in her small town and a few years earlier she was wrestling with the legacy of being the last in a line of “supernatural Indian warrior queens.” She is fairly confident that she has escaped her supernatural heritage and the toughest thing on her plate these days is dealing with the demands of the POM squad’s enormously bitchy captain, Naomi (who possesses all the classic mean girl material). Then the school erupts in scandal, Naomi ends up dead, the warrior queens are back, and Violet is sent on a trial that might just be the end of her life. It’s Buffy meets Veronica Mars with a heavy dose of 21st-century race and gender politics in this paranormal mystery that will keep you guessing until the end. And if that all isn’t enough, Brown Girl Ghosted also lets author Mintie Das share a lot of smart thoughts about what it means to “fit in” and why that’s a goal everyone should aspire to ignore as much as possible.

Life at Meadowdale High School is a familiar minefield that anyone who ever attend an Ameri­can high school will recognize. For Violet it’s a bit tougher because of her race, which Das does not shy away from discussing. There is also a lot here about what it is like to be a teenage girl in a world that celebrates teenage boys with the all-too-common issue of slut-shaming rearing its head in the ugliest of ways. When Naomi is killed, Violet thinks she knows why. But then the very dead Naomi shows up in Violet’s room and suddenly what was a high school scandal/tragedy becomes a haunting that upends Violet’s life. Getting to the bottom of what is going on among her group of friends means she will have to embrace a heritage that can sometimes make her uncomfortable, and that threatens every aspect of her life.

Oh – and there’s also a guy who works at the local funeral home (owned by Naomi’s parents, of course) who is not what he seems. (They never are, are they?) How he fits into everything (both good and bad) provides more than a few twists to the already layered plot.

Aside from the fast-moving narrative and all the layers of drama (involving both the living and the dead), Das inserts a ton of humor into Brown Girl Ghosted, which keeps the heavier parts of the storyline from becoming too overwhelming. She also makes a point of skewering more than a few adults for their appalling opinions about teenage sex and what constitutes rape (Don’t. Even. Get. Me. Started.) and her words on that score will ring very true to readers. By the end, Das wraps the current story up quite effectively then drops a zinger in the final paragraphs that sets up a perfect sudden cliffhanger. I was quite happy to see that, as I thoroughly enjoyed read­ing Violet’s whip-smart opinions on everything from pop culture to teen relationships and was not ready to let her go. Come for the snark, stay for the undead visitations, and don’t set this one aside until the mystery is solved. Violet Choudhury is an outstanding heroine and one tailor-made to garner many YA fans. 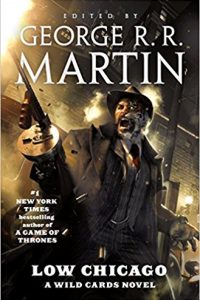