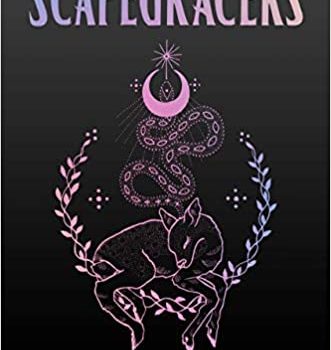 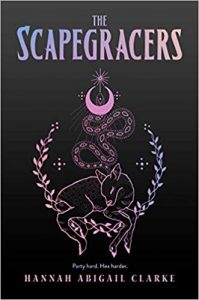 As an adult woman two decades out from my teenage years, I found The Scapegracers frankly irritating. It so perfectly captures the labile emo­tional textures and bad judgment calls of being a teen girl that it made me cringe, again and again, like that Chrissy Teigen GIF on an infinite loop. However, if you happen to be a teenage girl, this book is a real treat: it’s a fantasy of teen-girl em­powerment, friendship, and uniqueness. I predict and hope that The Scapegracers will sell well among its target audience, but it’s pretty tough to enjoy if you’re older than 20.

Sideways Pike is an oddball – a witch, a lesbian, a loner with two dads and a dead mom. In the first chapter of the book, she attends a party hosted by the three most popular girls in school: furious Daisy, cunning Jing, and sweet Yates. There, she does a spell that leaves magical chalk sigils all over the walls of Jing’s basement, a trick that catapults her into a friendship with the trio. Soon, that friend­ship turns into a coven, and the foursome flex their power to exact revenge and show off. Their she­nanigans catch the attention of a few adult witches, as well as the Chantry family, whose affiliation is roughly Christian and who have deeply nefarious purposes. Toward the end, Sideways follows her crush into a situation that robs her of a priceless treasure, and we’ll have to read the next book to see if she gets it back.

First of all, in case you were already wondering, this book strongly resembles the 1996 film The Craft. It’s almost fanfic of that film, or a written remake of it in the shape of this decade. And the themes of that movie have transferred over into The Scapegracers: the supernatural power of young women who support each other, the sense that dabbling in magic with selfish or spontaneous motives is a serious error, the unfortunate blunders that occur when mixing teenage judgment and per­manent consequences. Also in sync is the movie’s paper-thin plot. The Scapegracers is written with such tremendous, pointless detail – at one point it takes multiple sentences for the characters to go through a door – that the book’s big finish should rightly be its first major plot point. The four girls become friends, go to dinner together, explore their powers, and throw a party; the Chantry crew briefly kidnaps Sideways, and later she goes on a date. That covers nearly all the major events in the book.

But events are not the point. The book is a crawl around a teenage girl’s head, which means the narration is violently emotional, yet anchored in the body and its sudden weather: “My ribs felt weirdly honeyed, and my stomach fluttered, purred with something next to happiness.” Later, “My in­sides clenched up and wrenched themselves three degrees to the right. My body thrummed all over. Radiated heat from my core outwards.” Clarke’s language is overdetermined, but in an appealing way, full of strong verbs and snapping consonants: “The partygoers all looked a little smudged, a little sickly, like they were either going to keel over or float away any second, and when I let my eyes fall out of focus, the whole bopping crowd blurred together into one churning mass, like a monster’s four-chambered heart.”

The speed of Clarke’s sentences, coupled with paragraphs and pages and even whole chapters where nothing really happens – all this makes the book exhausting for anyone who no longer needs to feel understood in quite this way. Again, though, the novel is likely to be a boon to oddball teenage girls in the real world: the ones walking around with their hearts outside their chests, the ones who need reassurance that their powerless­ness is an unnatural state that can be remedied. Clarke cannily points out what many girls, and even women, never fully understand:

[T]eenage girls aren’t supposed to be power­ful, you know? Everybody hates teenage girls. They hate our bodies and hate us if we want to change them. They hate the things we’re supposed to like but hate it when we like other things even more, because that means we’re ruining their things. We’re somehow this great corrupting influence even though we’ve barely got legal agency of our own.

Clarke is getting at the paradox of youth culture – the moment when you have the least agency as the moment when society wants you to freeze your development – and that’s downright precocious of them. But it still doesn’t mean they’ve written a crossover book, merely that they’ve written a punk YA book with unusually sharp analysis. Reading it as an adult, I shook my head at the terrible choices Sideways and her friends make about whom to trust. Sideways consents to let a supernatural creature named Mr. Scratch share her bedroom, presumably because she doesn’t know the nickname “Old Scratch.” She doesn’t question the motivations of any stranger she meets, because she hasn’t learned yet that mostly people want something in return for what they give away. I don’t think various plot mechanics would work if the coven was less naïve, but the reading experi­ence nevertheless suffers.

Still, I hope that this book gets into the hands of as many girls as possible. I hope it outlasts the current flood of YA fiction, so that generations of girls use it to reach into their own power. I hope that Clarke writes successful sequels, and I hope most of all that their writing matures enough to please adult audiences as well. Despite its failure as a crossover, The Scapegracers is a good start and a fierce high-kick of a YA novel.