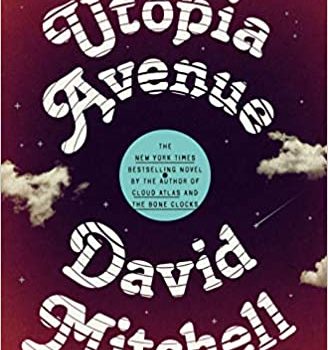 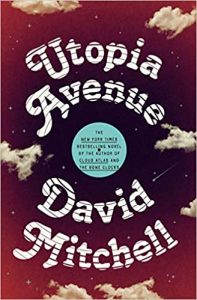 Five years in the writing, David Mitchell’s Utopia Avenue is set during the height of the British Invasion, which famously began when the Beatles appeared on The Ed Sullivan Show in 1964. This opened the door to acts like the Dave Clark Five, the Animals, the Kinks, and the Rolling Stones, who became household names in America. However, as David Kamp remarks in his introduction to “An Oral History of the British Invasion” (published in Vanity Fair back in 2014), this ground-breaking musical epoch was “far from being solely a beat-group explosion, [it] was a rather eclectic phenomenon that took in everything from Petula Clark’s lushly symphonic pop to Chad and Jer­emy’s dulcet folk-schlock to the Yardbirds’ blues-rock rave-ups.” It is this sense of eclecti­cism that Mitchell takes to heart in imagining his fictional band Utopia Avenue.

The group’s origin story sees manager Levon Frankland hand-pick four talented artists with diverse backgrounds and attitudes to music. On bass we have Dean Moss, the working-class boy from Gravesend whose bluesy songs echo his troubled childhood; on guitar is “Stratocaster demigod” Jasper de Zoet, the black sheep of the wealthy de Zoet family, who tends to more moody, acid inflected sounds; on drums is cheeky Yorkshire lad Griff (Peter Griffin), “who chugs like Charlie Watts, explodes like Keith Moon [and] swings like Ginger Baker”; and on the piano is Elf (short for Elizabeth Frances), who recently wrote and performed folk music with her boyfriend, as part of a successful duo, until he abruptly walked out on her. While the band endures a rocky start – Griff is glassed by an angry “mod” during their first gig – the clash of styles begins to attract a wider audi­ence, helped along by their first single charting in the top 30. Not everyone, though, is a fan of their distinctive sound, including one frustrated journalist in Amsterdam who asks the band: “But into which category of music… can Utopia Avenue be located? Our viewers at home will be worrying about this question. The category.”

Debates about musical taxonomy aside, one of the joys of reading Utopia Avenue is the band’s interaction with the icons of the Swinging Six­ties. Mitchell provides roles to David Bowie, Brian Jones, Syd Barret, and Keith Moon, while also finding space for tastemakers like Muriel Belcher, Francis Bacon (the artist, not the 16th-century philosopher), and Mick Farren. Jasper even spends a chapter searching for John Len­non at a party, only to find the Beatle hiding underneath a table. When Utopia Avenue tour the United States in the last third of the book, they meet the likes of Leonard Cohen, Janis Joplin, Phil Ochs, and Cass Elliot. Yes, this who’s who of the ’60s does feel a little gratuitous at times – an author clearly having fun putting words in the mouth of rock gods and cultural heroes – but in the latter part of the novel, these famous faces provide important context to the political and social turmoil of the period. In discussing the anti-Vietnam protests and the demonstrations and violence following the assassination of Martin Luther King, Jr., it’s the Grateful Dead’s Jerry Garcia who supplies the following insight:

“Every third or fourth generation is a gen­eration of radicals, of revolutionaries. We, my friends, are the bottle-smashers… the genies we let loose stay loose. In the ears of the young they whisper what was unsay­able. ‘Hey, kids – there’s nothing wrong with being gay.‘ Or ‘What if war isn’t a patriotism test, but really fucking dumb?’ Or ‘Why do so few own so goddamn much?‘ In the short run, not a lot seems to change. Those kids are nowhere near the levers of power. Not yet. But in the long run? Those whispers are the blueprints of the future.”

My main gripe with Utopia Avenue is that it doesn’t entirely stand alone; it forms part of Mitchell’s long-standing project to connect all his work into one uber-text. I do appreciate the ambition of the project, but with this novel, I found it distracting. It’s not so much the one-off references, most of which would have gone over the heads of most readers not acquainted with Mitchell’s earlier books: for example, the inclusion of Bat Segundo (the pirate radio station from Ghostwritten); the appearance of Luisa Rey (Cloud Atlas); or Jasper’s relation to Jacob de Zoet (The Thousand Autumns of Jacob de Zoet). As Jasper’s arc develops, though, and as he discovers why he keeps hearing a knocking sound in his head, the novel takes a decidedly fantastical turn with the introduction of the ho­rologists from Bone Clocks and Slade House. In contrast to Utopia Avenue’s music, where a blend of styles and tone works to the band’s ad­vantage, I found this intrusion of the speculative jarring when compared to the grounded reality of the rest of the novel, whether its harrowing descriptions of anti-war protests (that chillingly resonate with the current global demonstrations against police brutality), or Dean questioning if he should forgive his abusive father, or Elf com­ing to terms with her sexuality.

Reservations about the Mitchell-verse aside, Utopia Avenue is a colourful and politically aware love letter to the British Invasion and the last, lingering days of the Summer of Love. 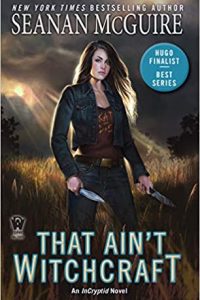