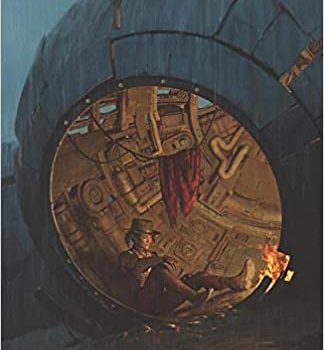 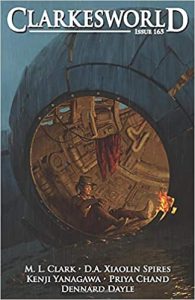 June’s Clarkesworld leads off with ”The Iridescent Lake” from regular D.A. Xiaolin Spires. Yunhe, who is dealing with the death of her son, works as a security guard at an ice skating rink where the ice has truly fantastic properties. Scientists have been studying it, but there are many active smuggling attempts that she must guard against… and perhaps participate in. With ”How Long the Shadows Cast”, Kenji Yanagawa brings us a slowly evolving story. Shunzo is a researcher of an alien language, and also an alcoholic dealing with the tragic and personally damning death of his partner. He’s been on one expedition to space and is hoping to maintain his spot on the next when a stranger comes into his life, camped out on his front doorstep. She’s a physics researcher with some esoteric interests. They fall in love, and he has many choices to make and hard truths to face. Shunzo’s character is nicely three dimensional, and the length of the story gives all the character and plot elements room to breathe.

M.l. Clark continues to expand the world that we first saw in ”To Catch All Sorts of Flying Things”. In this issue ”Nine Words for Loneliness in the Language of the Uma’u” shows us a space station in orbit around the planet we’ve visited so far. Awenato is the sole survivor of a diplomatic mission to the station – just as they were disembarking they were attacked by terrorists, and his mate as well as the rest of the party were killed. Now he must deal with recovering from his injuries, grieving, navigating the station when he doesn’t speak the languages very well, dealing with other alien species with very different attitudes, and trying to get some measure of justice for his fallen comrades. Clark’s inventiveness and attention to detail in building up these alien societies and characters continues to shine.

In a post-collapse future, the world is largely controlled by a panopticon AI called the Jade. In ”Optimizing the Path to Enlightenment” by Priya Chand, Anju is a technician who begins furtively exploiting gaps in the Jade’s coverage in order to enjoy some mild hedonism, like drinking fruit juice. Even as she is starting to widen those gaps intentionally, she has some doubts about the wisdom of sabotaging the system, wondering what could be unleashed. Finally, she has an encounter with the Jade itself, placing her on a very different path to enlightenment. ”Own Goal” by Dennard Dayle gives us the journal of an ad man struggling with the death of his mother and all the feelings that invokes, as his family goes through the grief and funeral process. He also has to keep up with his advertising job, in this case making a pitch for branding a particular weapons system. Then the space station he lives on gets caught up in the war…. The ending could have been a bit punchier if the story had been a little more focused, but I had no problem enjoying it throughout.

Ray Nayler‘s ”The Swallows of the Storm” in July’s Lightspeed is the latest in a very productive run of short fiction lately. Dr. Nino is a Georgian researcher who has spent her whole life chasing a mystery – perfect holes that show up in seemingly random places in the environment, taking chunks out of dirt, plants, animals, and sometimes unlucky humans. We meet her during a Congressional inquiry, when these holes have become too much to ignore. We get her testimony and also the perspective of her research assistant Harlan. The mystery is resolved in a nicely SFnal way, and I very much appreciated the denouement as well.

Kristina Ten‘s ”Baba Yaga and the Seven Hills” is very entertaining. Baba Yaga’s famous hut has gotten fed up with her and walked off, so she travels to San Francisco. Hilarity ensues as she rents a room and must put up with housemates, as she talks to waitresses and pot dealers, who have their own magic, and venture capitalist wizards speaking a completely different language. The concept and execution are great, but the story seems to almost stop dead instead of coming to a full resolution. Mari Ness continues mining rich veins of older stories to create her own: in ”Great Greta and the Mermaid” she imagines scholars reconstructing a story about Greta, a pirate marooned on Peter Pan’s island, and how an encounter with a Lost Boy led to a much sexier encounter with a mermaid. The style of an academic continually interrogating different sources will work better for some readers than others, but the denouement fleshes out the story quite well.

I saw two stories in Tor.com in June. The first is ”We’re Here, We’re Here” by K.M. Szpara. It imagines a near-future revival of the boy band phenomenon, and we focus on Tyler, a transgender man living his dream of being a boy band singer. During one performance Jasper kisses Tyler on stage, which sets off a tizzy in the management, not because of gay/trans issues but because they want Tyler’s image to be the wholesome, available one and don’t want fans constantly shipping Tyler and Jasper. But Tyler’s had a crush on Jasper and this raises all kinds of intense feelings in him, feelings he can barely give voice to. He is again rendered voiceless when the management asserts control over his speech implant, but the boys of the band pull together. It’s a very sweet story.

”Two Truths and a Lie” by Sarah Pinsker starts off in a relatively mundane way. Stella has returned home because a childhood friend’s odd brother has died. She feels guilty that the friendship had faded, and offers to help clean out the brother’s house. He was a hoarder and, after first being just gross, things take a strange turn when Stella invents what she thinks is a lie about an old local TV kids show, and instead finds videos of it in the brother’s house. The Uncle Bob Show featured a man telling strange stories directly to the camera while children played on the set, and it turns out that most people remember the show even if Stella doesn’t. As she researches more, she starts to see connections between the stories creepy Uncle Bob was telling and the fates of some of her childhood friends, and the story continues to get weirder from there. The ending is nicely underplayed. 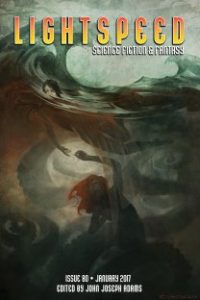 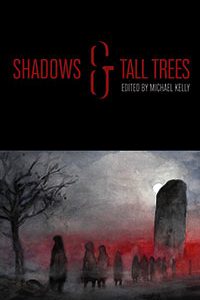