Genres and sub-genres are always tricky things to pin down, and never more so than with works that live at the boundary between two categories. Ashes of the Sun has been called, among other things, “science fantasy”—it’s not the only way to describe it, but it definitely fits. (Aside—as with all genre discussions, your terms and definitions may vary! There are many different lenses with which to examine these categories. This is just one of mine.) So what is science fantasy?

First of all, it’s a blended term, combining “science fiction” and “fantasy”. This is important because it means we shouldn’t take it literally—we don’t mean “fantasy about or involving science”, but rather something on the border of those two categories. (As far as I know, there isn’t a genre term for fantasy about science, though I’d love to read some.) In particular, science fantasy usually means a combination of the aesthetics of those categories.

One of the reasons genre definitions are so complicated (and the subject of so many internet arguments) is that you can come at them from multiple ways. You can talk about the subjects or themes of a genre—for science fiction this might be science itself, the extrapolation of the present into the future, the development of technology, and so on. But you can also talk about the aesthetic, or the trappings, of the genre, roughly speaking “the things that tend to show up a lot”. Spaceships, robots, energy weapons, computers, genetic manipulation, and so on for SF, or swords, dragons, wizards, kings, etc. for fantasy. (Importantly, neither of these approaches is wrong! To the extent that genre is a tool for figuring out which readers might like which books, either definition can be useful, depending on the reader.)

Science fantasy, as a category, typically doesn’t refer to a combination of subjects so much as a combination of aesthetics. We don’t mean an SF novel that includes an examination of the nature of kingship; we mean a book that has spaceships and dragons in it. The clearest example of science fantasy, which practically everyone is familiar with, is Star Wars. Indeed, I think Star Wars is so familiar now that it can be hard to take a step back and see it for the blend it is: it has starships, robots, and blasters, but also knights and magic, along with a Campbellian Hero’s Journey that wouldn’t have fit into Golden Age SF.

And this is what really attracted me to this particular corner of the SFF spectrum, because I love the crossing and combining of aesthetics. It always fascinated me that there’s no intrinsic reason that fantasy has to take place in pseudo-medieval-England (and, thankfully, it increasingly does not). My first series, The Shadow Campaigns, blended a set of more typically fantasy elements (secret magic, ancient cults, kings and queens) with a social and technological background from the late 18th century (muskets, cannon, social revolution). This is not quite science fantasy, since the aesthetic I’m blending isn’t that of science fiction. 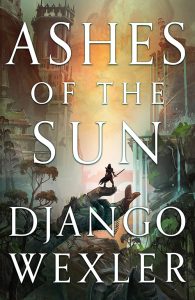 Ashes of the Sun, on the other hand, is proper science fantasy. (Which is no accident, because it owes quite a lot to Star Wars!) So we have quite a few fantasy trappings—a varied but general low level of basic technology, swords and lots of melee combat, magic enacted mostly by will and thought—combined with some definitely SFnal ones, although sometimes viewed through a fantasy lens: energy weapons, flying ships, robots, atomic weapons, genetic manipulation, transporters.

Writing something like this raises a couple of unique wrinkles. First, there’s the question of whether this is literally a blend of magic and present- or future-technology, as seen in RPG settings like Shadowrun and Rifts and series like Mark Lawrence’s The Broken Empire. In my case I went a different route, with a fundamentally magical universe where the uses of magic resemble or evoke SF tropes. This helps keep the metaphysics of the story consistent—the power that Maya wields with her flaming sword is fundamentally the same power the Chosen used to create skyscrapers, flying ships, and blasters, but humans have lost much of the ability to use it.

This gets at the second tricky part in putting together a world like this, which is explaining how this situation came to be and continues to exist. After all, there’s a reason that certain pieces of aesthetic don’t go well together—in spite of what Warhammer 40,000 might tell us, there’s not a lot of room on the battlefield for swords when machine guns are available. In this case of Ashes of the Sun, the dichotomy is the result of an apocalyptic collapse of civilization—but importantly, it’s the collapse of a magical civilization, including the extinction of the most powerful wielders of magic, leaving their successors to pick through their scraps. Unlike the fallen civilizations that populate most D&D worlds, who are mostly confined to ruins and wilderness, I wanted to show something closer to the downfall of a modern or SF civilization. There’s just stuff everywhere, even centuries later, repurposed by those who come after in interesting and sometimes alarming ways.

So, why set Ashes up in this particular way? There’s many reasons—the Star Wars connection, plus I just think it’s cool—but science fantasy also reflects the philosophical disagreement that’s at the core of the book. One form of magic, deiat, is innate and hereditary, available only by an accident of birth; one side believes that those who can use it have the responsibility to rule and protect the rest. The other, dhaka, can be learned by anyone—it is experimental, and often dangerous. The authorities consider it a threat, while the other side in the debate believes it’s the only way for humanity to move forward. This neatly mirrors some common contrasts drawn between science fiction and fantasy, and so giving the world a science fantasy “look” seemed like a natural choice. I ended up having a lot of fun with it, and I hope you will to. 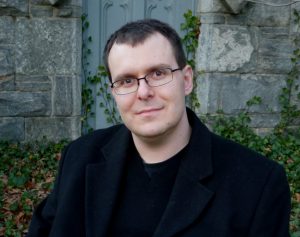 Django Wexler is the bestselling fantasy author of the Shadow Campaigns series and the Wells of Sorcery young adult series. He graduated from Carnegie Mellon University in Pittsburgh with degrees in creative writing and computer science, and worked for the university in artificial intelligence research. Eventually he migrated to Microsoft in Seattle, where he now lives with two cats and a teetering mountain of books. When not writing, he wrangles computers, paints tiny soldiers, and plays games of all sorts. Ashes of the Sun, the first book of his new epic fantasy series, releases July 21.