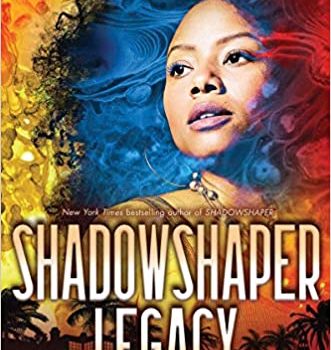 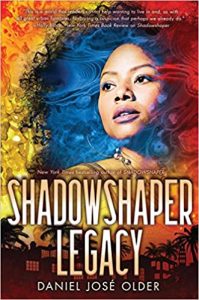 Daniel José Older brings his ambitious, intense and thoroughly satisfying Shadowshaper Cypher series to an end with the very nearly overwhelming action of Shadowshaper Legacy. Sierra and her friends must confront one more big bad in their efforts to bring peace and security to Brooklyn and finally obtain safe control of the Deck of Worlds. A lot happens in this third book – a lot – and readers will have to resign themselves to a late night of page-turning to get through it all.

First, it must be stated that this is a series that has to be read in order, period. There is absolutely no way that someone can pick up Shadowshaper Legacy and hope to have a clue as to what is going on. The trilogy is very plot intensive, and without having read the previous two books readers will be completely lost. Having said that, Shadowshaper Legacy is by far the most heavily plotted of the series and a reread of the previous book might be in order prior to giving this one a go.

It has been over a month since the events of Shad­owhouse Fall and some of the heroes are in jail and some are now initiating a major power play against their (somewhat) weakened enemies. Sierra is still in charge, now more so than at any moment prior, and her friends have lined up at her side with little complaint. She is still keeping secrets, however (to protect everyone else, of course), and it might be a bit surprising to readers how easily this sort of thing goes down with the group. Unfortunately, once one villainous crew is taken care of, another always seems to rise up in its wake. That standard remains true, with the last big bad a racist jerk who, of course, must be vanquished.

As Sierra and her friends split up, come together, and race back and forth across the city, the chapters ping from one person to another. Older was clearly tying up all the loose ends here, both in terms of the Deck of Worlds conflict and among the many friendships and romances. Unfortunately, there is not enough room to give everyone an equal amount of attention, and this leaves several characters as hardly more than footnotes. The plot’s frenetic pace also leaves little time to develop the villains as much as in the earlier books, and this is a bit disappointing. Honestly, I think Shadowshaper Legacy would have worked well as two books rather than one, especially as there are some significant, albeit brief, interludes on Sierra’s family history that were shoehorned in here as well.

Regardless, Shadowshaper Legacy is a solid end­ing to what has been an outstanding series. Daniel José Older created something new and wondrous with his Shadowshaper world, gifting readers with an out­standing cast of diverse characters and a setting that is very urban (Brooklyn) and yet decidedly rooted in its Caribbean origins. Every step of the way, Sierra has been an enormously engaging protagonist to watch and I am certain the author’s legion of teen fans are desperate to see what he will gift them with next. 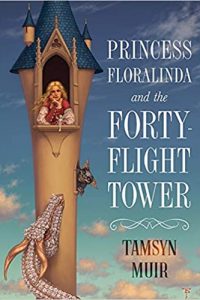