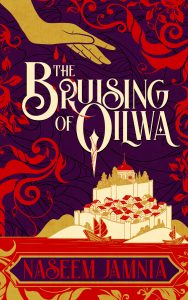 The Bruising of Qilwa is the first novel by non-binary Persian-American author Naseem Jamnia, who last year received the first Samuel R. Delany Fellowship, sponsored by CatStone Books, to recognize SFF writers from ‘‘a community that has been traditionally marginalized in speculative fiction,’’ according to their website. It seems like an excellent choice, not only because of the small but engaging cast of characters and the complex social and political situation Jamnia thrusts them into, but because marginalization itself informs the novella at almost every level. Firuz-e Jafari, a non-binary healer in an ancient tradition called blood magic, is also a refugee in the city of Qilwa, where they have found employment at a free clinic run by the idealistic Kofi, whose clientele consists largely of immigrants and refugees like Firuz. (Jamnia is careful to maintain the characters’ preferred pronouns, which they use as prefixes to their names when first introduced.) While the plight of refugees and a fraught history of colo­nialism, imperialism, and even ethnic cleansing looms heavily over the narrative, Jamnia’s central plot is essentially a medical mystery, complicated by the city’s problematic public health policies.

Although a plague in Qilwa has begun to abate, Firuz notices that a number of patients at the clinic are exhibiting strange new symptoms, characterized by bruising, exhaustion, and slow blood clotting. Stranger still, none of the other clinics in the city seem to report any such patients. While Firuz is trying to puzzle out the mystery, they meet a teenage orphan named Afsoneh, who has extraordinary magical powers of her own, but is barely able to control them. Complicating mat­ters further, Firuz and Kofi are summoned before the governor – who determines which clinics will be publicly funded – and face accusations of practicing blood magic, which is associated with the despised refugees from neighboring Dilmun. Many of the refugees, like Firuz, are Sassanians, a once-powerful group who are now outcasts, targeted by an ongoing siege which begins to look uncomfortably like the ethnic cleansing I mentioned earlier. Firuz claims to be practicing only ‘‘structural magic,’’ however, while Kofi’s practice is based on the medieval theory of hu­mors. With three distinct forms of healing at work, the novel takes on some aspects of a purely medical thriller, and this becomes more evident later in the tale, when Jamnia introduces some actual hematology into the mix, include the pos­sible discovery of immunization and antibodies.

With its complex geopolitical backstory involving Sassanians shifting from colonizers to the colonized and eventually to refugees, its intriguing portrayal of the city-state of Qilwa, its medical puzzles, and its examination of the varieties of prejudice and distrust – especially after a local boy dies from the bruising disease while being treated by Firuz – The Bruising of Qilwa has a lot on its rather small plate. It’s hardly a complaint to suspect that many readers might hope for a more thorough introduction to this world; some details are barely mentioned in passing. But Jamnia keeps things under control by focusing on a handful of well-drawn characters – not only the thoughtful and humane Firuz, but the apparently kindly Kofi (who turns out to have a few dark secrets of his own), the powerful but immature Afsoneh, and Firuz’s younger brother, who provides a kind of reality check on the other characters’ preoccupations with magic. Like many of the best novellas we’ve been seeing these last few years, The Bruising of Qilwa is something of a Tardis tale, considerably bigger on the inside than it first appears, and it’s a rewarding addition to that growing body of fantastic fiction address­ing themes of colonialism, bigotry, gender, and cultural identity. The world of the book is one we’d like to know more about, and Jamnia is a writer worth paying attention to.