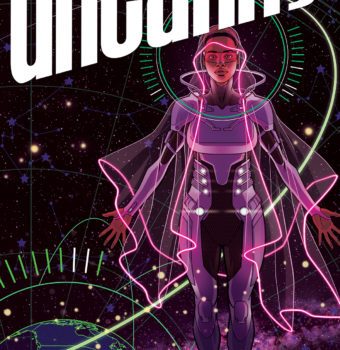 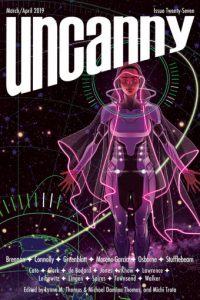 Uncanny is one of my favorite periodicals because, even if the stories are not always 100% top-notch (no magazine’s content can be!), they are all 100% enjoyable to read and each issue always offers variety. That’s rare and welcome.

Whether intentional or not, the March/April issue has an appropriately springtide theme. Five – maybe all six – of this issue’s original stories deal with love, but they are still a diverse lot.

In the only “non-love” offering (although duty and the love of a community as a whole might make it count) – “The Dead, in Their Uncon­trollable Power” – Karen Osborne sets the tradition of the sin-eater on a future generation ship. In the hierarchic society of the ship, the dire memories of past captains, as well as the positive recollections of their “graces,” are preserved by nanobots in their blood. At death, the captain’s heir drinks the graces, the sin-eater the “sins.” The voices from the past guide (or push) those new to their roles. Status quo is maintained, the ship goes on, and terrible secrets are known only by the sin-eater. Here, two fairly young girls assume these duties. Will they, can they break with the past?

“A Sharp Breath of Birds” is Tina Con­nolly‘s charming story of a girl’s fascination with birds and her eventual transformation. It’s a fairy tale of sorts, and disclosing more might spoil it.

Bonnie Jo Stufflebeam‘s poignant “Every Song Must End“, is more of a relationship story than genre. A polyamorous relationship is tested and torn by one couple’s move to – here’s the genre part – Mars. It’s an insightful look at just how strong true love can be.

“Vīs Dēlendī” by Marie Brennan scrutinizes the method of magical academic acceptance of a candidate whose power is based in love. True love can evidently conquer a great deal, perhaps even death, but things don’t turn out as the aspiring magician expects.

Silvia Moreno-Garcia‘s “On the Lonely Shore” is a gothic but still refreshing tale of what one realizes by the end is a doomed relationship.

The world is slowly ending in A.T. Green­blatt‘s “Before the World Crumbles Away“: frequent earthquakes, climatic uncertainly, economic woe, and more. There is some good in this future: bioengineering has enabled Marina, a blind artist, to see. Her relationship with grad-student programmer Elodie is another reason for optimism – but can anything make a real differ­ence in the midst of disaster?

Stephen Volk leads off the March/April issue of Black Static with his well-written novelette “Unchain the Beast“. Readers may need some patience as it covers nearly 80 years and nothing scary happens for at least the first three decades. It starts with boyhood friends in Mexico and the first inkling of what eventually becomes a suc­cessful film horror series under the direction of one of the grownup boys. The other becomes his makeup artist. They have a falling out. After the true horror of the 1968 massacre of demonstrators in the streets of Mexico City, the central trope of the films is converted into a political symbol, and on and on, until the final modern-day reveal. Then we find out what the real terror was.

The first-person narrator of “In a Dry Season” by David Martin is a not-very-nice writer. He moves to one of those supposedly quiet English villages that – in murder mysteries, anyway – always seem to be occupied by people willing to kill for rather minor reasons. But this isn’t a mystery, so there are no homicides as the tension builds to support an ending that you can interpret, or not, in several ways.

Amanda J. Bermudez translates the German title – “Totenhaus” – of her entry as “house of the dead.” That’s a far more romantic translation than “funeral home,” but as the story takes place in the early 19th century – consider: “mortuary” did not become a polite term for “deadhouse” un­til 1865 – it is a fair one. It’s a minimal story that hints at greater stories beyond the one set down, with plenty of effective atmosphere and dread.

In “Roiling and Without Form“, Kay Chronister tells us of the Flamingo, a motel set in mysterious mangrove swamps and owned by Mother. Mother views everyone as either “edible” or “dangerous,” which gives you some idea that this is a pretty creepy place. Forty-six-year-old Molly is the desk clerk/maid/minion. The world may or may not be related to our own, but it seems to be populated mostly by creatures just as bloodthirsty and weird as Mother.

There’s another first-person narrator for “The Stop-Tap” by Tim Lees. He’s nameless and teen-aged this time and has to deal with a vicious bully named Michael Purley. The anxiety this induces calls for medication he finds distasteful, but he discovers an alternative – a weird old spigot that can (sort of) stop time. It can also, evidently, stop bullies.

In Tom Johnstone‘s “The Beast in the Pal­ace“, academic Dr. Cecilia Nyerere is fascinated by rumors of secret tunnels running from Brighton Pavilion. She seeks out someone whose ancestors worked in the Brighton Pavilion Gardens near the end of the reign of George IV. She finds her source and gets her story, an odd one indeed, about a young woman stolen from her African homeland. The story is excellently told in 1829 style and there’s plenty of fictionalized true-life horror here, but the novelette ends abruptly and I’m not at all sure about the physical nature of the monster. Nor do we learn anything of Dr. Nyerere’s reaction to this story.

The March 2019 issue of The Dark offers its usual two original stories. Due to my editorial project The Mammoth Book of the Mummy, it should be public knowledge that I like Egyptian mummy stories, but I like the details straight. Don’t let my nit-picking lead you to avoid “After Life” by Shari Paul, though. The idea of a modern-day powerful corporate “pharaoh” using the living dead to become even more powerful is a fun idea and the author does a good job with it. Details that irritate my personal persnicketiness – like having a 10,000-year-old mummy involved with mythological/religious/symbolic concepts that didn’t arise until four or five thousand years ago, or that, generally, mummies with their arms crossed are believed to be pharaohs – will prob­ably not bother you.

The other story in this issue, “Modern Sci­ence” by Nelson Stanley is about a mad doctor and his patient. The doctor is treating a man whose maladies – which started the very day his lover left – do not seem to be improving. The story meanders along and a cure is finally found in this odd and somewhat amusing tale.

The April issue of The Dark features two South American writers. Amélia, in “An Open Coffin” by Argentine-Brazilian author H. Pueyo, has a new job in General Estiano’s household. As caretaker of a well-preserved corpse in a crystal coffin, she not only attends to the deceased, she welcomes visitors obsessed with the body and the better times they experienced when it was alive. There are several levels to this relatively short story, but none of them will prepare you for the chilling end.

“Seventy-Seven” by Francisco Ortega – translated here by David Bowles – was originally published in Spanish. It begins in August 1995 when 65-year-old Elcira Ramirez is awakened by unearthly footsteps. She meets an unusual and grue­some end. Fifteen years later, Antonieta Baculic, an eager new assistant district attorney, is investigating a number of deaths similar to that of Ramirez. She approaches ex-detective Sergeant Amador Martinez, who worked the 1995 deaths, for help. His surprising answers explain much more than Baculic – or the reader – expects.

In the April issue of Nightmare, Mari Ness both subverts and glorifies the clichés and tropes of every gothic novel ever written, in less than 1,800 words, with the delightful “The Girl and the House“. One can read the ending as true horror or one can recall the words of Jo Walton (“Some heroines are born to kick ass, but some have asskicking thrust upon them. The heroines of gothics discover inner resources they did not know they had and keep going to win through”) and see our damsel as empowered.

“The One You Feed” by Dennis E. Staples, the issue’s other original, did not sit well with me, and I am not exactly sure why. Perhaps it was the oversimplification of things like Native Americans’ displeasure with pipelines across their sovereign lands. (“When we say no to pipelines, it’s because we are scared for our women.” Well, yes, but there’s much more to it than that.) I can accept the fantasy of the Ojibwe narrator, Ms. Watersong, having two wolf cubs living in the ventricles of her heart and a need to release them, but the idea she can have elec­tive open heart surgery to solve that problem – with no medical reason – is unacceptable. Overall, I feel Mr. Staples had good intentions with his story, but did not manage to execute them well.

“Malotibala Printing Press” (Nightmare, May 2019) by Mimi Mondal starts off as an old-fashioned haunted house tale, except it is a haunted printed press in India, is told by a ghost, and includes a descendant of a tiger-deity. It turns into an enjoy­able – even heartstring pulling! – revenge story. Those looking for horror will probably not be as pleased as those happy to find dark humor.

Also in the May issue of Nightmare, the un­der-1,400-word “Ten Excerpts from an Annotated Bibliography on the Cannibal Women of Ratna­bar Island” by Nibedita Sen is exactly what the title promises. Short and clever.

A quick final recommendation: “Mama Bruise” by Jonathan Carroll from Tor.com on 4/17/10. A couple begins having problems with their dog. Quite strange ones, it turns out, and they grow stranger still. Things go “from whimsical to worrisome and whaaaat? to dangerous and destructive. They kept coming and coming. But never once did either of them think any of it was because of the dog until finally….” Carroll, as always, has a knack for mak­ing the absurd entirely appropriate. No matter how bizarre the apparently impending threat at the end, one simply believes it and trembles. 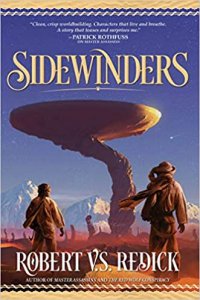