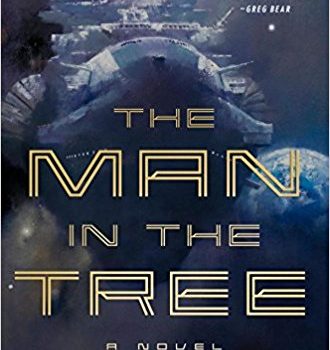 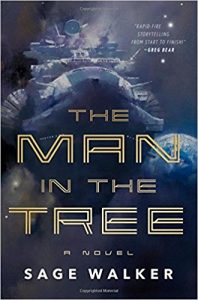 More than 20 years ago, Sage Walker won a Locus Award for her first novel, Whiteout (recently reprinted by Tor), and then nearly disappeared from the field entirely, except for a couple of short stories, but it’s apparent she hasn’t been ignoring the field all that time. Her second novel, The Man in the Tree, is a generation starship tale which knows that it’s part of a long tradition. “Most of the gloom and doom scenarios for generation ships were played out by science fiction writers long ago,” one character explains, “and they al­ways came down to the same ugly thing. It’s not the machinery that will be the problem. It’s the people.” As if to underline this, Walker’s acknowl­edgments, after describing SF as a discussion, cite authors from Poul Anderson and Fritz Leiber to Kim Stanley Robinson and Neal Stephenson as having taught her about generation ships. She’s learned well, because the political, social, and engineering details of the hollowed-out asteroid seedship Kybele are worked out with impressive detail, and the main challenges she grapples with are indeed those identified by earlier writers: maintaining equilibrium in a community that is part village, part corporation, and part nation, while delicately balancing the precarious ecology of what Walker accurately describes as a giant greenhouse. It’s a pretty fancy one, though, with high-tech transportation systems and urban areas, marshes and waterfalls, and forests large enough to support deer herds. As is usual with such tales, Earth itself is in dire straits, with the population down to three billion, depending largely on “arable land at the poles,” and with the oceans unlikely to repair themselves for centuries. Kybele (not insignificantly named for an Earth-goddess) is thus a kind of “insurance policy,” a long shot that nevertheless is deemed more practical than trying, for example, to terraform Mars.

All this is pretty familiar, but Walker makes a couple of interesting choices that set The Man in the Tree apart. In the first place, Kybele is still in the decades-long preparatory phase before leaving orbit, with contract workers arriving and departing, and the culling of the population – to determine who will be allowed to remain among the 30,000 on the actual voyage – is an ongoing source of tension. In the second place, Walker’s plot is that of a police procedural murder mystery. One of those contract workers, Cash Ryan, is found impaled on a tree, having either jumped or been thrown from a nearby high-rise tower. The investigation falls to Helt Borreson, an Incident Analyst whose “job is to arbitrate conflicts between Navigation, Bioscience, and Systems Support” – the three main administrative authorities on board. Helt soon determines that the death is most likely a murder, but the only initial suspect is Elena Maury, a biologist and physician with whom, only pages earlier, Helt had fallen sloppily in love. The plot grows more complicated as Ryan’s apparently undistinguished background is revealed as partly fake, and we learn that he had stalked both Elena and another woman. Was he in fact a criminal or saboteur? Was he involved in a rather shadowy organization called the Seed Banker, which is opposed to Kybele, but which seems to have seven members on board the seedship? And, of course, was Elena involved in any way?

Helt’s investigation provides Walker with a convenient way of introducing us to the various constituencies and tensions aboard Kybele – after all, that’s one of the things murder mysteries are good for (everything I know about change-ringing or horse racing came from them). And there are some intriguing secondary characters, such as a brilliant architect and sculptor who signs on as a welder just to be on board, or the midwife who turns out to be the other stalking victim. Helt himself seems a little more problematic and even old-fashioned as a character, close to a stereotype of a dedicated cop torn between love and duty – and, considering that he’s investigating the murder of a creepy stalker, he seems more than a bit creepy himself, obsessing continually over Elena’s cheekbones, neck curves, perfect skin, amber eyes, and nipples under her blouse. While the details, technology, and social organization of the seedship seem fully engaged with the ongoing discussion that Walker is well aware of, both Helt and, to some extent, Elena seem to have stepped out of the pages of a 1970s romance. With so many bigger issues at stake – and a resolution that is fully in keeping with the SF setting – it’s a little unnerving to find ourselves again rooting for the hero to land his squeeze just so he’ll grow up. 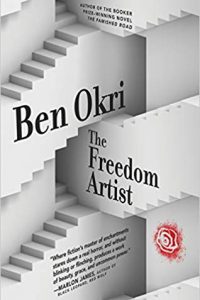