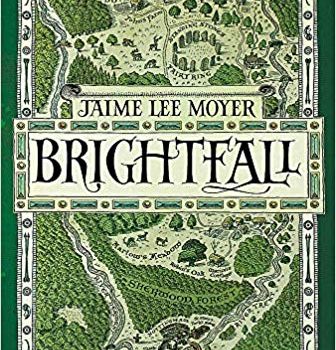 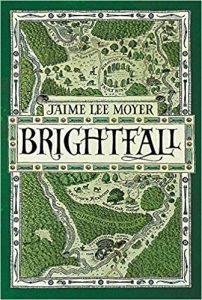 Brightfall is Jaime Lee Moyer’s first novel since her debut trilogy (Delia’s Shadow, A Barricade in Hell, and Against A Brightening Sky, the last of which came out in 2015). Brightfall is both like and unlike these previous books. Like, in that it shares a similar tone and a similar interest in women’s lives and their (frequently fraught) relationships with the men around them. Unlike, in that instead of early 20th-century San Francisco, Brightfall sets itself in the medieval Sherwood of Robin Hood and reinvents the characters of the ballads to its own ends.

Robin Hood is a figure of the ballad tradition, a trickster haunting the greenwood meting out “justice” – or at least comeuppance – to hypocrite priests and churlish nobles. In the earliest ballads and fragments, he’s a yeoman rather than a noble­man, partly an embodiment of the ideal social order (pious and generous, autocratic but fair) and partly a subversion of feudal norms. The Robin Hood mythos is capable of contradicting itself. It’s large. It contains multitudes, and operates across centuries and changing social ideals, and cannot be pinned down to any particular historical period within the medieval span stretching from the Norman conquest to the end of the Wars of the Roses. The earliest compilation, the Gest of Robyn Hode (Child Ballad 117), refers to the king as Edward, but early modern and modern treatments of Robin Hood have preferred to situate him in the nine-year reign of Richard I (Richard the Lionheart) and the regency of his brother John Lackland (who in his own reign was very unpopular with his nobles, due in part to his attempts to curb their power). This has gener­ally allowed such treatments to highlight Robin Hood’s loyalty to the “rightful king” in his sub­version of the authority of John’s administrators.

Brightfall is a very different treatment of the Robin Hood mythos. It’s not interested in Robin’s rivalry with Nottingham’s sheriff. It sets itself af­ter King Richard’s death, and isn’t very interested in kings, either. It’s interested in a middle-aged Marian and her determination to protect her chil­dren – and the children of her friends.

Years ago, Robin denounced Marian, who was pregnant with his children, and instead of standing by his marriage vows, retreated to a monastery to repent his (unspecified) sins. He abhors Mar­ian as a witch whose magic tempts people to the damnation of their immortal souls – and Marian has been raising two children on her own ever since, living alone in the middle of Sherwood, with Will Scarlett for her lover.

That’s before Tuck, now an abbot, turns up on Marian’s doorstep with the news that Will’s dead. He’s not the only one to die: several old friends from their days as Robin Hood’s band have died. So too has a child, Little John’s son Ethan. Tuck believes that magic is a tool like any other, but he suspects that a curse is responsible for the series of mysterious deaths. Fearing for her children, Marian bargains with the Fae – specifically with the Lady of the Fae court in Sherwood – for their protection, before she sets out on a quest to discover who’s killing her old friends and why.

Unfortunately, Tuck has dragged Robin out of monastic retirement to help protect Marian. Sul­len, secretive, and antagonistic, Robin scarcely resembles the man Marian married. Worse, he’s outright hostile to – and apparently terrified of – the Fae lord who’s chosen to accompany Marian on her journey. The secrets in Robin’s past may be the key to the present deaths, but he’s so wrapped up in piety and guilt that he won’t talk about them, and Marian’s too damned tired and frustrated with him to get him to open up.

The magic and the Fae of Brightfall remind me strongly of Seanan McGuire’s October Daye books and of the work of Mercedes Lackey. De­spite the murders and secrets and lies, there’s a gentle, reassuring undertone to Brightfall. Allies appear when they’re needed, though often they keep secrets of their own and manipulate Mar­ian for what they see as her own (and their own) good. Magic works on a combination of ritual and instinct. The Fae are creatures of their word, but more human than alien.

This is a measured, comfortable, comforting novel. It’s not going to challenge anyone’s pre­conceptions – except perhaps those expecting a heroic Robin Hood – but maybe it doesn’t have to. It’s a fun story about a mature Marian. I liked it.