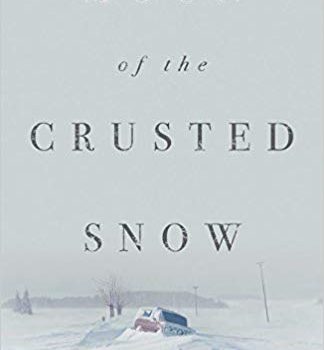 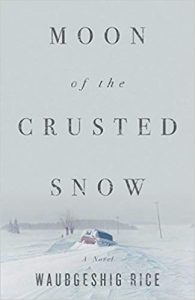 Moon of the Crusted Snow is a book on the cusp. It’s not a preface to apoca­lypse, and it’s not the postscript; it takes place during the moment in which a society realizes that one kind of life is over, and another kind of life is going to be the norm. Rice isolates and stretches this moment, setting his novel in a remote community and giving the story several months to unfold. First phones go down, and then TV and radio, and then power. The trucks delivering groceries don’t come. No one knows why, and no one arrives to explain. The remote community must fend for itself, and build a new way of life from the remains of the old.

Story is the primary asset of this book. The main character, Evan, is developed only to the extent he must be, and the language forgoes decoration and lyricism almost entirely. It’s a simply written book, almost leaning to YA in its slow, deliberate sentences and plain vocabulary. But the story, one of survival, is terrifically powerful, a familiar nar­rative told in an unfamiliar location.

That location is the reserve for a First Nations band in northern Canada. (Since Rice is Cana­dian, some of his terms might be unfamiliar. In America, it would be the reservation of a Na­tive American tribe.) The actual location is not specific, but the reserve is many miles from the nearest developed town. A few hundred of Evan’s people live on the reserve, which is a nearly self-sufficient community, particularly thanks to traditional hunting and fishing. The winters are extraordinarily long and harsh. The band’s interdependency is a major aspect of the novel, because, in extreme circumstances, interdepen­dency becomes a means of survival.

Rice never reveals what has happened to make the power and communication grids go down. Whatever happened, it was big. Two young men attending school in the closest developed town return to the community a few weeks after the first outage, and they offer a sketch of the crisis as the outside world experienced it: food and water running out, insulin-dependent students dy­ing, eventual rioting and desperation. The crisis, whatever it is, isn’t due to a Canadian province cutting off the reserve’s connections to the grid, but something more significant and ominous. How the band copes with this loss fuels the remainder of the novel.

Aiding the conflict is a white visitor, Justin Scott, a doomsday prepper who supposedly comes in peace and humility after realizing he can’t survive on his own. Despite his guns and bravado, Justin is a man alone on someone else’s property, as Evan realizes: “He’s stranded… He needs us more than we need him.” Scott brings divisiveness, deception, and violence to the com­munity, almost serving as an allegory for white interference into Native ways and lands. There’s plenty of conflict without Scott, though, as interdependency will always be controversial to those who believe they deserve more for having worked harder. These petty conflicts make Moon of the Crusted Snow what it is: a thorough look at the first stage of apocalypse as it affects a specific group of human beings.

The book brings to mind a 1959 novel from the throes of nuclear anxiety: Pat Frank’s Alas, Babylon, which also focuses on a handful of people during and just after a major disaster. That book seems to have fallen out of fashion, which is a shame. Like Moon of the Crusted Snow, it’s less about testing and excoriating humans who have survived a catastrophe (e.g. Cormac McCarthy’s The Road, or Emily St. John Man­del’s Station Eleven), and more about the human reaction, right at eye level, to a major shift in the normal way of life. The worst possible reaction is giving in to panic, both novels instruct, and the best is to rely on your neighbors.

Rebecca Roanhorse posited in Trail of Light­ning that Native American populations may be better equipped than white people to survive the world’s end. Rice seems to agree: “Survival had always been an integral part of their culture. It was their history. The skills they needed to persevere in this northern terrain… were proud knowledge held close through the decades of imposed adversity… Each winter marked another milestone.” More baldly, as an elder puts it late in the novel, “Yes, apocalypse. We’ve had that over and over. But we always survived. We’re still here. And we’ll still be here, even if the power and the radios don’t come back on and we never see any white people ever again.”

The novel’s most significant achievement may be its mood. From mundane beginnings, the book increases its tension continuously across its 200 pages. It’s a cliché, but this book is hard to put down. Written with such guilelessness that it’s easy to read, and with such strong linearity and so little waste that it’s extremely absorbing, Moon of the Crusted Snow is a humble but welcome addition to apocalyptic literature. 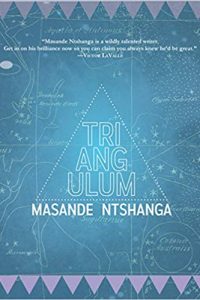