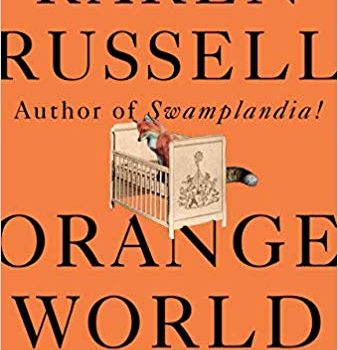 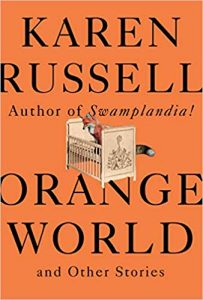 Given my taste for narratives that straddle the literary and the fantastic, it might come as a surprise to know that I’ve never read Karen Russell’s fiction. It’s not that I haven’t been aware of her work; it’s hard to ignore the Pulitzer she was a finalist for in 2012 for her debut novel Swamplandia! or her well-received short fiction, including Vampires in the Lemon Grove. For whatever reason I’ve never gotten around to picking up her books, which is why I was eager to read Russell’s new collection Orange World and Other Stories, featuring eight pieces published originally in prestige venues like The New Yorker and Zoetrope.

It’s immediately apparent from the opening pages of “The Prospectors”, the first story in Orange World and Other Stories, why critics have lavished praise on Russell’s fiction for over a decade. Her prose is a delight to read, sometimes elegant, sometimes poetic, always rich with mean­ing. Take how she represents the passage of time in “The Prospectors” as “slinking around the for­est, slyly rearranging its shadows” or in “The Bad Graft” as “sand, sand, sand – all that pulverized time. Eons ago, the world’s burst hourglass spilled its contents here; now the years pile and spin, waiting with inhuman patience to be swept into some future ocean.” Very different, yet evocative and memorable, infusing their respective stories with a distinct tone and atmosphere.

However, as much I basked in the writing, I found a number of the stories to be under­whelming. “The Prospectors” starts strong, a Depression-era piece about two friends, Aubby and Clara, who run away from Florida to try their luck amongst the wealthy magnates of Or­egon, but becomes a less-than-convincing ghost story reminiscent of the ballroom scene in The Shining, but not nearly as frightening. I had an opposite reaction to “The Bad Graft”, where the dullness of the main characters – a young couple who’ve recently eloped to Southern California – tarnish the piece’s wonderfully bizarre and fantas­tical conceit that Joshua trees, when they flower, can transmit their essence to a person. (I laughed out loud at the revelation that Joshua trees love to dance.) “The Gondoliers” and “Black Corfu” are stories beautifully written, where I could admire the world building (“The Gondoliers”) or the racial themes (“Black Corfu”) but where I lost interest in the narrative either because it meandered or was just too long.

There are three stories, though, where the plot, the speculative elements, and the themes are seamless. “Bog Girl: A Romance”, as the title suggests, is a love story between fifteen-year-old Cillian Eddowis and the mummified cadaver of a girl he finds buried in the peat. For the most part, nothing overtly supernatural occurs, other than everyone on the remote island treating the Bog Girl as if she were alive, as if she and Cillian were in a relationship. That normalisation of the weird provides the story with multiple facets: it’s disturbing (Cillian sleeps with, but never touches, the Bog Girl, and she’s never given a name), extremely funny (“The Bog Girl is a bad influence… all day she lazes about the house.”), and moving and melancholy, particularly the ending. I also adored “The Tornado Auction”, the collection’s second climate change piece where farming practices in the Great Plains have moved from livestock to the cultivation of twist­ers. Robert, a lonely old man who is struggling to find a reason to keep going – his wife has died, his years of tornado-rearing are over, he’s mostly estranged from his daughters – in a moment of insanity or inspiration purchases a twister with what’s left of his life savings. I loved Russell’s numerous descriptions of dust-devils “shrubby and meek, gyring in place like a music-box bal­lerina, already dissipating into the golden after­noon air,” and the unexpected, redemptive, even hopeful ending. Finally, there’s the title story, “Orange World” where a mother makes a deal with a nasty little demon to ensure the healthy birth of her child. The price is not her soul, but breastfeeding the demon at least once a day. Yes, the demon is an obvious metaphor for the anxieties of pregnancy and motherhood, but the strength of this story comes from how the other mothers band together to help our protagonist wean herself from the evil creature.

I may not have liked all the pieces in Orange World and Other Stories, but when Russell gets it right, as she does with, “The Tornado Auction” and “Orange World”, it makes for a sublime reading experience.