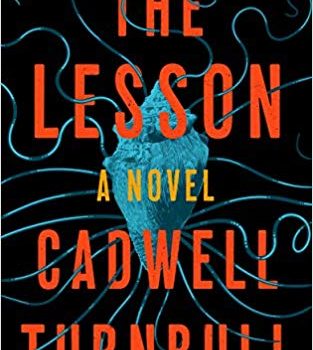 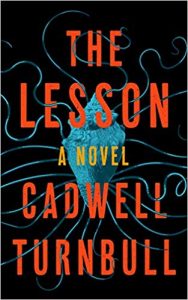 Although I could be wrong, I think The Lesson, Cadwell Turnbull’s debut novel, is an allegory for white interference in Black cultures, whether in Africa, America, or the Caribbean. I’m cautious of assigning this idea from inside my white skin, because I could be making a deeply insulting assumption. But if I am wrong, I’m listening to anyone who wants to explain what I’ve misunderstood – and anyway, it wouldn’t lessen my admiration for this remarkable book.

The Lesson is set in the Virgin Islands, mostly in the very near future, though there’s a long passage that flashes us back to the Maroon rebellions in 18th-century Jamaica (Google that if you don’t know about it; fascinating bit of history). It’s about an alien ship that lands in St. Thomas, and five years of rippling consequences following the landing. Mera, an “ambassador” from the alien Ynaa, is one of a large cast of third-person narrators. Some voices pervade the novel (Derrick, an idealistic young man who works for Mera), while others only speak once (Jammie, a marijuana grower with an alien girlfriend). The book is crowded with characters: Patrice, a local girl made good who fears the Ynaa; Jackson, her father; Shawn, a foolish, violent teenager; Harriet, Derrick’s grandmother; Lee, his sister; and so on. Every character has at least a few good moments, but the book starts to feel like a literary scrapyard toward its end, full of pieces of stories rather than a smooth narrative.

The story of the book is less an agile plot than it is a series of shifts in the lives of these characters. Key events occur, but how the characters absorb and react to these events makes the plot feel a little sparse. No matter. Turnbull’s writing is affecting and intelligent, dropping wisdom like cherry bombs: “The universe didn’t care about strength. It didn’t care about anything. Indifference looked like malice to creatures with something to lose.” Each character has a story, and each story has a winding path that leads him or her to a final, often brutal conclusion. The Lesson isn’t symmetrical or geometric, but messy, driven by decisions and relationships. That makes it much more human.

The trouble with allegories is how circumscribed by purpose they often feel. Nothing that doesn’t fit the allegory can go in the book. The Lesson does not have that problem; its events occur organically, and the book’s nature comes clear only gradually. The Ynaa, although they don’t mean any specific harm to the human race, unquestioningly react to any degree of aggression with extreme violence. It takes time for the reader to understand that Turnbull is writing about white people – that when the Ynaa tear arms off in response to being accidentally shoved, they are taking care of the uppity humans. Because Mera seeks to help so earnestly, and because she divides her loyalty (“unable to speak out against the Ynaa and unable to speak fully on behalf of the humans”), it takes time to understand Turnbull’s point about the uneasiness of middle ground between conflicting racial agendas. Because the aliens, who land in a ship shaped like a conch shell, seem to have a connection to island life, it takes time to appreciate Turnbull’s restraint, his purpose in limiting the story to an island colonized and exploited many times over. His intentions in linking the Maroon story to Mera’s long occupation of Earth become clear once the turnabout of violence begins to make sense. It all fits well without taxing the reader, and without squeezing the narrative in places it should spread out.

In a simpler book, the Ynaa, because they are Othered, would stand in for black people, and would suffer persecution and casualties to form the allegory. But The Lesson works harder than that. Toward the end of the book, Shawn, grieving his brother, decides to murder one of the Ynaa. He observes her walking down the street: “He recognized the expression on her face… Tranquility. Not a care in the world. The Ynaa was certain that nothing could touch her. How wonderful it must be to float through the world with all that certainty, knowing that you could do anything and it wouldn’t come back to you. How wonderful it must be to feel safe.” These words take on heavy significance in our current world, not just in the speculative one Turnbull has invented. Plus, ultimately, the Ynaa’s mission translates to white greed for immortality, which may be the one consistent legacy white people have spread across the world.

In craft, The Lesson is hardly a perfect book. It has false starts (the opening makes it seem like a YA book), it juggles its many characters with less than ideal grace (Patrice, characterized inconsistently, has a convenient, low-stakes pregnancy), and its vague gestures to how the world beyond St. Thomas deals with the Ynaa’s existence are not enough to fully contexualize the event. But it’s a daring and thoughtful book, which is far better than a beautifully crafted snoozer. Moreover, it’s a book that presents racial issues and questions in a genuinely new way, which makes it a book that, I hope, will stand the test of time. 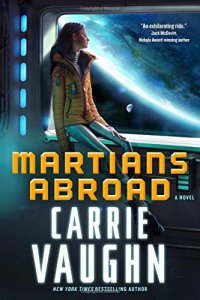 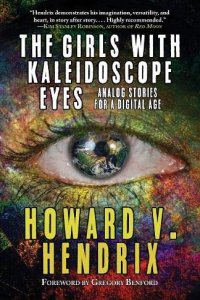 One thought on “Katharine Coldiron Reviews The Lesson by Cadwell Turnbull”