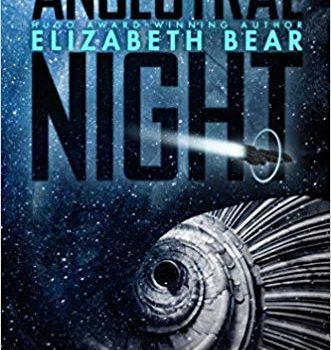 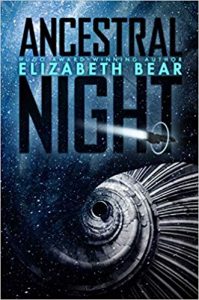 Elizabeth Bear’s Ancestral Night is a big book (with a promise of more bigness to come – the title page says it is “White Space Book 1”) crammed with a variety of SF motifs and tropes and furniture items: space operatics, interstellar civilization, Big (Variably Smart) Objects, alien encounters, deep galactic history, artificial intelligences, and neural/physical enhancements for the meat-based characters. It also engages with questions about the nature of personality, authenticity, autonomy, and the good society (here, the galaxy-spanning Synarche). The story line supported by all that machinery intertwines space piracy, kidnapping, mass murder, multiple alien encounters, and the narrator’s struggle with her personal history and psychology.

The complex adventure begins out beyond the galactic fringes, when a salvage crew – an artificial intelligence/space tug called Singer and its crew of pilot Connla and engineer Haimey Dz (plus the ship’s cats) – finds not only the lost ves­sel they’d been seeking, but the corpse of a giant space-dwelling alien, an Ativahika. Thereafter the mysteries pile up: the question of what killed the Ativahika and emptied the mystery ship of cargo and crew; the nature of the strange technol­ogy that infects Haimey when she explores the derelict; and the role of the pirates who show up and chase them away from their prize. The story takes Haimey and her companions halfway across the Milky Way, with a stop at a shady space sta­tion, to the black hole at the galactic center, and back out to the big empty. The narrative is busy with encounters with corrupt and honest officials and strange aliens, hot pursuit by pirates, salvage work, kidnapping, captivity, space combat, and cosmic puzzles.

Threaded through all this is a great deal of conversation and reflection about matters of personal and civic morality. Haimey Dz has a difficult and complicated personal-familial his­tory, starting with estrangement from her rigidly authoritarian natal clade, experiencing a traumatic relationship, and finally getting therapied (via the above-mentioned neural engineering) into stabil­ity by Synarche authorities. The fine details of her background must remain unSpoiler’d, but they have considerable significance in the way the cen­tral section of the story plays out. Long stretches of it are spent in the company (if that is the right word for marooning, kidnap, imprisonment, escape, and related activities) of the sociopathic pirate Farweather, who serves as a kind of Grand Inquisitor in conversations about social freedom and personal identity. Even without Farweather as a debating partner, much space is given to Haimey’s thoughts on her own psychology, her relationships, her motives, and just herself-in-general, and her thoughts expand to include reflections on the con­figuration of the Synarche, the philosophical-ethical basis for its mores, and its possible limitations or excesses. I confess that I was occasionally impa­tient with these introspections and observations on personal and social matters, even though the issues that she considers are crucial to the book’s thematics and plot, and her own trajectory.

This book is in conversation with a number of oth­ers, first of all with Bear’s own – this future is tied to her Jacob’s Ladder trilogy (Dust, Chill, and Grail) via a mention of that “famous ship from history.” There are also strong echoes of C.J. Cherryh and Iain M. Banks – especially the latter, since the Synarche is clearly a cousin of the Culture: an ancient, galaxy-spanning, multi-species polity dedicated to what we might call rational and utopian values (also prone to snarky ship names, e.g., the Synarche Justice Vessel I’ll Explain It To You Slowly). That, in turn, con­nects with Haimey’s debates with Farweather about freedom and authenticity, which echo Greg Egan’s frequent examinations of ways of engineering the self (e.g., “Chaff” or “Mister Volition”).

Not that it’s all applied philosophy and psychol­ogy. The chases, escapes, and discoveries of ancient alien artifacts and haring across half the galaxy and back again make for as gaudy an adventure as one could want, as does the cast of AIs, sociopathic libertarian pirates, snoozy cats, and particularly a charming giant predatory alien-insectoid cop. And this is just Volume One. I quake to imagine what the encore will be like.