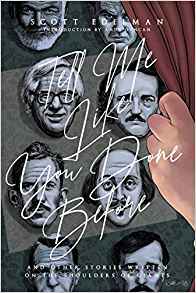 As a writer who labors meticulously and intensively and slowly at his craft of short fiction, and as one who has publicly proclaimed that he has no interest in writing novels, Scott Edelman accumulates published work at a relatively slow rate—at least compared to other writers in our high-pressure world of fantastika, where the old standard of a book of year is rapidly transitioning to two or more annually, just to stay afloat. But although there was a seven-year gap between What We Still Talk About (2010) and Liars, Fakers, and the Dead Who Eat Them (2017), we find Edelman’s most recent collection landing in our laps just a year after the last. I for one am thrilled. Assuming—and with plenty of justification—that future volumes will be as good as this one, we need them at a steady clip, to counterbalance the flood of less passionate, less well-honed fiction.

Edelman’s theme for this volume is one close to my heart, since I myself compiled a similar collection, Lost Pages. Both Edelman’s book and mine contain stories that constitute our tributes to the writers and other artists we love, our lineage, our dharma masters, our ancestors. My guys included Kafka, Heinlein, Pynchon, Anne Frank and others. As for Edelman’s heroes—well, you’ll see in a moment. But I just need to pause to compliment Andy Duncan’s sparkling introduction, and Edelman’s own endnotes which are candid, illuminating, quirky, and fun.

The title story, “Tell Me Like You Done Before”, riffs on John Steinbeck and his famous novella Of Mice and Men. It follows the fate of one of the original protagonists, George, in a zombified landscape that becomes an objective correlative to all George’s guilt and unfulfilled ambitions. The creepy Depression-era texture could be filmed in tandem by John Ford and James Whale. Next up is “What We Still Talk About”, a tribute to Raymond Carver that recounts a posthuman expedition to old Earth that reminds me of Moorcock’s Dancers at the End of Time series. Yet the Carverian essence of modern love’s frustrations still comes through. Told in gracefully intertwining epistolary fashion, “The World Breaks” finds its inspiration for the quotidian lives amid an apocalypse in Hemingway’s famous quote about healing stronger, and shares that literary giant’s interest in “grace under pressure.”

Shel Silverstein’s The Giving Tree receives a mournful sequel in “And the Trees Were Happy”, conferring some belated wisdom on the child hero grown old.  Composer Randy Newman provides the seed for “My Life Is Good.”  Alien “Visitors” of a Malzbergian sort force a hapless man to monitor all the potential alternate histories of the songwriter, and he finds himself drowning in his subject’s intensity of purpose.

A sense of multiversal possibilities infuses “Pity This Busy Monster Not”, whose e.e. cummings-esque title reveals its source of homage. The story is rather Blakean in its mythic resonances, a fitting accompaniment from one poet to another.

We get the first of our never-before-seen stories in “Opossums and Angels.”  Here the template is James Tiptree and her fictions, and Edelman yokes two of her stories together in a merciless dissection of gender and power dynamics. The oldest story in the book, “Fifth Dimension”, is the most humorous, as Edelman metafictionally describes a TV set that channels unknown episodes of The Twilight Zone. Cue the well-caught voice of Rod Serling. “I Wish I Knew Where I Was Going” is a quiet tale of identity crisis befitting Edelman’s particular role model here, Charles Grant. Certainly the most antique yet evergreen of inspirations in this collection is Edgar Allan Poe—but via one of his poems. Thus “The Trembling Living Wire” delivers a “biter bit” tale of a serial abuser of women who rationalizes that his tortures bring worthwhile artistic perfection.

Surely the knockout piece of this volume, in terms of sheer technical prowess and powers of invention, is “A Plague on Both Your Houses”, a long account in Shakespearian play form of the star-crossed romance between Carlo, son of New York’s Mayor, and Dolores, daughter of the King of the Zombies. “Borrowed is my undead zombie soul./Blue my skin, except where it is grey./Old my bones which crack each time I stroll./New my fleshy hunger every day.”  From this macabre feast we segue directly to a tender Bradburyian look at “The Final Charge of Mr. Electrico.”  The magician who once christened child Ray with the impulse to “live forever” receives his own benediction at last. The urbane and droll Saki benefits from a creepy continuation of his tale “The Open Window” in “A Most Extraordinary Man.”  Showcasing Edelman’s fascination with the metafictional tales of Italo Calvino and Manuel Puig, “This Is Where the Title Goes” compounds a story out of a kit of “simple” stage directions. Thornton Wilder’s Our Town is not generally considered a strictly genre work, but Edelman undercuts that assumption by showcasing its fantastical aspects in “Live People Don’t Understand.”  And the final tale is the second to debut here. If you ever wondered what happened to the hero of H. G. Wells’s fantasia about infinite power at the end of his trials, you’ll find out in “The Man Who Wouldn’t Work Miracles.”

There are generally two angles of attack with stories like these. One is to imitate precisely the style of the original writer, and even make direct reference and tie-ins to certain stories. The second approach is to be more loose, playing with the signature themes and topics and characters of the model without getting too specific. Edelman uses both methods here to good effect. In the Wells, Saki, Tiptree, and Bradbury pieces for instance, we get deft, accurate pastiches of the original, whereas in the Carver, Grant, and Poe excursions, the elder authors serve as generalized ideals on which to spin off kindred fictions.

But whichever method he uses, Edelman exhibits a keen eye for all the requisites of good fiction:  deep characterization, sharp pacing, micromachined prose. And at the throbbing core of each story is not some mere impulse to show off one’s chops or prove just how widely one has read, but rather a taut, impactful human dilemma, often revolving around the frustrations of love or career. These stories do not all end on a universal happy note, but they all show the protagonists resolving their destiny one way or another. And when, as in “The Final Charge of Mr. Electrico”, one of the characters receives his epiphany, we sense that Edelman’s desire to carry the torch passed to him by his literary ancestors is the only job worth doing. 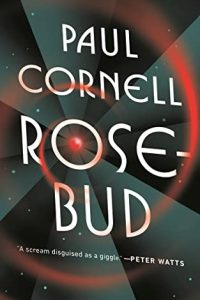 Adrienne Martini Reviews Rosebud by Paul Cornell, The Necessity of Stars by E. Catherine Tobler, and And What Can We Offer You Tonight by Premee Mohamed 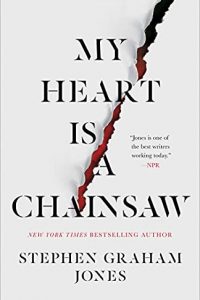