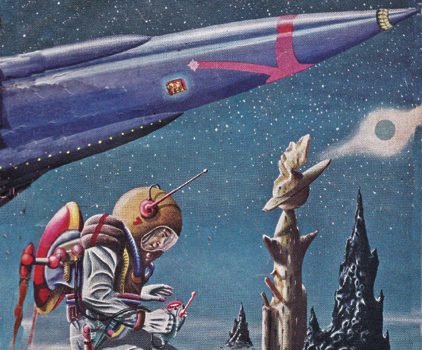 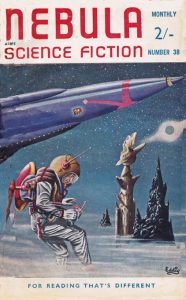 Scotland has always had a rich storytelling histo­ry and the predilections towards the fantastical are evident in even the earliest oral incarnations of social-sharing. The folk tales and mythologies of the seanchai, village storytellers who passed down their tales at ceremonies and community events, ex­tolled the virtues of brave warriors and the mythical adversaries they had to overcome – take the Orcadian (pre-Lovecraftian) folktale “Assipattle and the Stoor Worm”, or the ancient Celtic story of “Angus and Bride” as two examples of this inherited lore.

Since then, the storytelling traditions of Scotland have played a central role in the narrative landscape of fantasy and science fiction. But it wasn’t always an easy role to play – the forests and woodlands were uneasy companions in the cities that shadowed them. In those early proto-SF landscapes, there appears to be something in the working-class’s fear and curiosity which has given spirit to the nation’s literacy ichor. Take Thomas Erksine’s 1817 novel Armata, which explored the fear of advancing technology before Shelly’s Frankenstein – and, while reminiscent of Thomas More’s Utopia, remains a uniquely impor­tant entry into the canon of technophobic literature.

In Out of History: Narrative Paradigms in Scottish and English Culture, Cairns Craig argues that the literary tradition of narrative fiction in Scot­land followed a separate path from its English and American counterparts:

This unique quality of Scottish fiction, Craig argues, allows for a broader explora­tion of alternatives and “values which stand outside of history as we define it: not after history, or before it, but beyond it.”

Without even covering the early work of Sir Walter Scott or Sir Arthur Conan Doyle’s Lost World omnibus, one can already see that Scotland is a country invested in, and obsessed with narratives that are “outside” of history. In Strange Tale of Dr Jekyll and Mr Hyde (1886), Robert Louis Stevenson redefines the Kafka-esque transformation story. The gothic visions of Hyde wandering the laby­rinths of a sinister London (and the dualities of his monstrous condition) could very well symbolize the world and its modernity, and the histories that lie outside of it.

Of course, it could very well describe science fiction itself in Scotland: the struggle to find an identity in an unstable future, as if somewhere in those imagined tomorrows, they might forge a future (and an identity) that is wholly their own. We see this in the work of David Lindsay in the “Voyage to Arcturus” (1920), where a pilgrim awakens on a strange planet, which forces him to make crucial re-evaluations at every turn (where landscapes and emotions are joined and metamorphosis is constant). In Naomi Mitchison’s “Memoirs of a Spacewoman” (1962), the heroine learns to communicate with a variety of life-forms on different worlds and discovers unexpected truths about herself.

In such a context of thematic concern, Scottish science fiction began to grow in popularity.

While the nation gave rise to an abundance of artists who wanted to create, it became clear that Scotland had an audience who shared these sensibilities. And yet, there has been something of a dearth of publica­tions in SF and fantasy for many years. In 1952, a pioneering science fiction magazine came along and provided just that. Nebula SF was a large, digest-size magazine edited in Glasgow (and published there from issue #6) by a young Peter Hamilton. It was the first professional magazine to publish stories by heavyweight SF writers like Robert Silverberg and Brian Aldiss – Aldiss said of Nebula, “The British scene has always been too short of SF magazines, especially ones that – as this BSFA index shows – produced such a good crop of good stories as Nebula did.” However, due to the health concerns of the editor – and those were compounded by printing disputes, as well as import restrictions by the US, South Africa, and Australia – Nebula’s plight was sealed. Nebula only ran for 41 issues. Scotland produced a few smaller-press ‘zines and pamphlets which circulated in the early to mid-’90s and flew completely under the radar. Fanzines and chapbooks were coming back into fashion and young Scottish SF-obsessive (and future SF star in his own right) Michael Cobley was a proponent of this punk, DIY aesthetic. As editor of Shark Tactics, Cobley sought about creating a response to Bruce Sterling’s Cheap Truth. Cobley said, “It was meant to be a carping, intemperate spitball of criticism aimed at the under­belly of Brit SF at the time.”

Cobley went on to create MindMaps, a much more lavish and professional-looking magazine – which only lasted for one issue. Interestingly, the MindMaps cover was designed by Gary Gibson, one of the na­tion’s most successful writers of hard-SF to date. Gib­son himself also dabbled briefly in the ditto-machine racket. Under a pseudonym, Gibson was featured as an editor for a tiny, micro-‘zine called Territories. It referred to itself as “a slipstream journal” and mixed fiction and non-fiction. The ‘zine included short sto­ries from writers who were part of Gibson’s writing group, and non-fiction covering topics that included Koyaanisquatsi, neurosurgery, book reviews, and interviews with writers like Ian McDonald and Kim Stanley Robinson. Territories lasted for four issues (and usually featured contributions by Cobley). Of his own magazine, Gibson has said:

I was heavily, heavily influenced by US maga­zines which were at the time the only way to hear about or read stories by ‘underground’ SF writers of the time… I bought SF Eye, and New Pathways and other even smaller magazines and thought: I can do this. It did feel like my efforts went largely, if not entirely, unnoticed, until I read an interview with Michael Moorcock in Interzone (the Moorcock special issue) where he said something regarding how he’d rather read magazines such as… and then mentioned Territories. 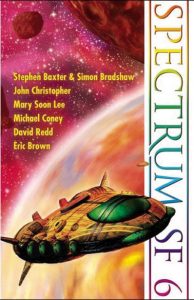 It took 48 years for another pro-mag­azine to come into fruition. Spectrum SF emerged from the granite and oil perpendiculars of dystopian Aberdeen. While Nebula boasted a postmodernist approach to science fiction, Spectrum focused on hard SF – space operas and interplanetary warfare. This was a strange regression in tastes. Founded in 2000 by Paul Fraser, Spectrum only ran for nine issues until 2003 but man­aged to serialize the likes of Charles Stross’s The Atrocity Archive (from November 2001-November 2002), and solicit works by the likes of Adam Roberts and Neil Asher, during its short publication history. 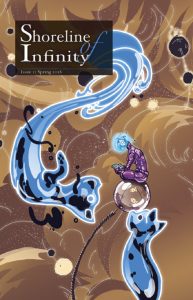 Shoreline of Infinity has presented the Scottish SF landscape with something of an aberration – a magazine which has lasting power. All it took was one of the most significant political events in UK history to give it flight. The magazine was created by Noel Chidwick and Mark Toner in Autumn 2014, following their YES campaign during the Scot­tish Independence referendum. Unlike the others, Shoreline of Infinity continues to go from strength to strength. Chidwick explained, “We both actively canvassed, and Mark and I had spent months soak­ing up the enormous amount of positive energy. We wanted to build something from that. Something that would show Scotland off to the world.”

Eventually Chidwick & Toner had enough content from Scottish writers and writers from America, Canada, and Australia to fill at least a couple of issues. It wasn’t long before Charles Stross agreed to an interview and Edinburgh journalist Paul Cockburn offered a piece about the science fiction of John Buchan.

Throughout its tenure, it reached Issue 12, and published over 100 writers and over 50 artists. Currently, they have international subscriptions and have branched out into publishing with special issues produced for the Edinburgh International Book Festival and science festivals throughout Scotland – and they recently republished a classic collection of science fiction by Scottish writers. Chidwick and Toner are pioneers in the field of product promotion – even holding 32 live events known as Event Horizon each month since. They currently have plans to launch a podcast, buoyed by the recent disappointment on the Scottish ref­erendum.

As the magazine market began to grow, promi­nent writers such Iain M. Banks and Ken MacLeod were writing novels about far-future worlds that gained international recognition. In MacLeod’s “The Sky Road”(1999), the destruction of arti­ficial satellites precipitates a return to a dark age, in which primitivist Greens have taken control of cities. In Banks’s Culture series, artificial worlds and matriarchal ships are part of a utopian vision based on childlike play and maternal care.

A similar theme emerges in Alasdair Gray’s “A History Maker” (1994), which depicts a semi-utopian world ruled by women. Here, the role of men is largely relegated to televised re-enactments of famous battles throughout history.

Later, anthologies such as Nova Scotia: New Scottish Speculative Fiction also gained recogni­tion abroad, and featured work by writers such as Michael Cobley and Neil Williamson. In Cobley’s “The Intrigue of the Battered Box”, we glimpse an alternate version of Scotland in which Edinburgh is the capital of Britain and is built around a monu­ment to Robert the Bruce. Williamson’s “Benny and the Bonobo” tells the story of an unsuccessful inventor of a transport system who comes to realize that future success may come with a price.

One of the most interesting and provocative voices to emerge during the 2000s has undoubtedly been Hal Duncan. However, Duncan takes his cues from writers like Borges and De Sade over Heinlein or Zelazny, draping his characters over surreal nightmare cityscapes (usually a retro-futuristic depiction of Industrial Edinburgh). His Scruffian series is primarily concerned with scamps and sodomites, but also deals with ghosts of the past.

Duncan’s work, like so many other Scottish writ­ers in the genre, seems to ask the question – just what future lies ahead for the Scots? There is an irresistible urge to look at genre fiction in Scotland as one with a central conceit, a story which is outside of history, or a narrative that articulates the lives of alienated loners on the edge of society. Despite these parallels, genre fiction in Scotland is a constantly evolving art, and whether or not the work is “out of history,” it certainly has “made” history and it will continue to do so in the future.