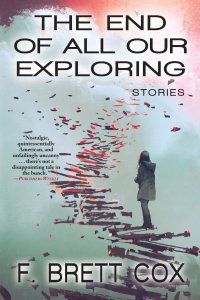 Like a fine vintage wine, Brett Cox’s career has been slowly ripening, almost subliminally, for some time now, a vault-ensconced treasure that we handle and inspect at intervals, as if turning a precious stored bottle to prevent sedimentation, always anticipating the day when the long season’s whole batch is ready to be presented for the connoisseurs. If you can pardon this overdrawn fruity metaphor, that day of decanting has finally arrived with the publication of Cox’s superlative first collection, The End of All Our Exploring, featuring over two dozen stories, with the oldest dating to the year 2000. And the wait was undeniably worth it.

Three things to mention before I hopscotch through these tales, selecting some highlights that will allow me to convey the exact flavor and range of Cox’s writing. The title, which might at first seem a tad melancholy, is anything but, deriving as it does from a famous T. S. Eliot quote: “We shall not cease from exploration, and the end of all our exploring will be to arrive where we started and know the place for the first time.” Thus, Cox sides with the optimists who believe that the treasure is the journey, and that hard-won maturity and wisdom do possibly await us after all our travails.

The second point to affirm is that this is the latest in Fairwood Press’s recent run of phenomenal story collections, testament to the heroic and perceptive energies of publisher Patrick Swenson. Long may he persevere. Any reader interested in strengthening the health of genre short fiction should support Fairwood Press.

Lastly, with only two late exceptions, we rapidly discover that Cox’s tales inhabit a very rich but circumscribed neighborhood of fantastika. No pure-quill SF, hard or otherwise; no New Weird; nothing surreal or bizarro; no Tolkienesque subcreations. Rather, he favors naturalistic, mimetic storytelling that allows for subtle (or sometimes gonzo) intrusions of the unreal, with his chosen venues being the Victorian era, or the recent twentieth-century past, or contemporary times.

Cox chooses to open his volume with a somewhat Faulknerian tale of haunted lovers, “Legacy.” A family curse prevents romantic fulfillment, but also forces to the surface hidden preconceptions. The tale is at once savage and bittersweet. Next up is “The Amnesia Helmet,” a kind of Waldropian foray into pop culture improbabilites. Inspired by Buck Rogers, a young genius girl invents a mind-control device, but discovers that even her technological skills cannot solve her family troubles.

Mention already of Faulkner and Waldrop (cropping up later in the text will be Flannery O’Connor; and we can’t omit Andy Duncan, who provides this volume’s introduction) points to Cox’s embedding in the tradition of Southern literature, a place earned by his birth and upbringing in North Carolina. And Cox’s current tenure as a professor of literature ensures that his invocations of many classics are earnest, perceptive, well-earned, and forceful.

“The Light of the Ideal” is a densely drawn quasi-steampunk excursion which surveys life among some US Victorian poets and novelists who have the fortune (or misfortune?) to gain access to a kind of mirror of truth. The ending, with its cameo by a writer we all know and love, is a perfect climax.

A most unlikely–yet brilliantly consummated–conflation of sea monster and Temperance crusaders occurs in “The Serpent and the Hatchet Gang.” Heroine Julia’s epiphany, wherein she is vouchsafed a vision of futurity, is fully in line with the aspirational feel of this volume’s title.

Two tales that share the prefix of “What We Did on Our Vacation” illustrate Cox’s deft hand with depicting the lives of married couples. In both, the eruptions of the unreal recall the classic Twilight Zone tactics of Richard Matheson and Jack Finney.

“The Deep End,” “It Came Out of the Sky,” and “Maria Works at Ocean City Nails” all disclose Cox’s affinity for chronicling the quotidian lives of average citizens in city, suburb and heartland, all the average, half-unseen places that make up the tapestry of America. Deploying a kind of Stephen King K-mart realism, these tales expertly walk a tightrope between mundanity and extravagant unreality. The black humor and ripe dialogue in “It Came Out of the Sky,” with its good-old-boy teenagers, showcases Cox’s droll wit.

A multivalent account of odd doings embodied in a young woman’s psyche is the Aickmanesque theme of “Suspension.” “I stop by the only window in the stairwell and look out on the churchyard. The shadows are getting longer, moving across the cemetery. The lake shines beyond the markers. I can just make out the statue of the Stevens children out in the middle. From here, halfway down with my head spinning, it blurs and looks almost as if it were floating above the ground.” Truly eerie.

One of the most accomplished stories herein is “Madeline’s Version,” a retelling of Poe’s “Usher” fable from the sister’s POV. As with all these stories, Cox does not waste a word or use any inauthentic language. Whether following in Poe’s tracks or capturing the cadences of contemporary speech, he exhibits a sharp ear and eye.

The final two stories find Cox venturing at last into pure SF to excellent effect. “The End of All Our Exploring,” original to this collection, limns in compact epistolary form both a post-apocalyptic landscape and a soured domestic relationship. And closing out the book in bravura fashion is “Where We Would End a War,” a story that filters Besterian concepts through Lucius Shepard-style grittiness.

As befitting the man responsible in large part for the creation of the Shirley Jackson Awards, this book is the ne plus ultra of modern literary fantastika as traceable through Jackson and her ideational descendants. But at the same time, it often reflects a kind of Erskine Caldwell earthiness and a pulp brio. That’s a lot of flavors to pack into one jeroboam, but Brett Cox is masterful enough to accommodate them all.