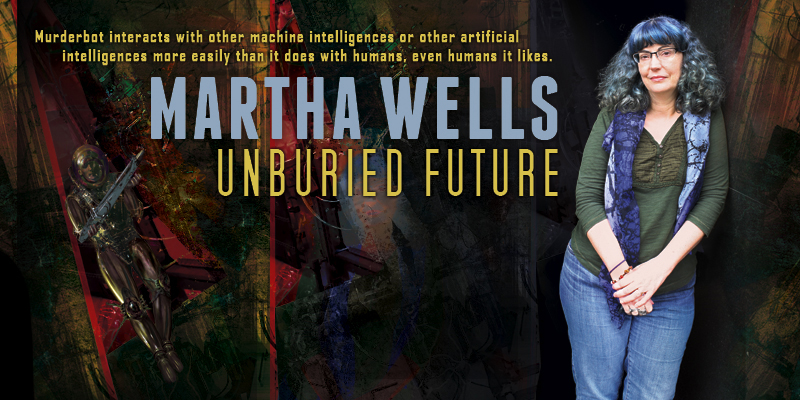 Martha Susan Wells was born September 1, 1964 in Fort Worth TX. She attended Texas A&M University, graduating with a BA in anthropology. She lives in College Station TX with her husband.

Her debut fantasy novel The Element of Fire (1993) began the Ile-Rien series, which includes The Death of the Necromancer (1998) and the Fall of Ile-Rien trilogy The Wizard Hunters (2003), The Ships of Air (2004), and The Gate of Gods (2005), plus collection Between Worlds: The Collected Ile-Rien and Cineth Stories (2015).

Her standalone novels include City of Bones (1995) and Wheel of the Infinite (2000), plus YA novels Emilie and the Hollow World (2013) and Emilie and the Sky World (2014). She has also written Star Wars and Stargate Atlantis tie-ins, and was lead story writer for a recent Magic: The Gathering expansion.

While most of her work is fantasy, she’s made a big splash recently in SF with The Murderbot Diaries series of novellas. First book All Systems Red (2017) won Nebula and Locus Awards, was a Philip K. Dick Award finalist, and is a current Hugo Award nominee. Sequel Artificial Condition was released in May, and Rogue Protocol and Exit Strategy are due later in 2018.

She gave a toastmaster speech at the 2017 World Fantasy Convention, “Unbury the Future”, about the forgotten role of women in early SF and fantasy, which can be read online here.

“I always wanted to be a writer. I always liked science fiction and fantasy, and my parents always had it around the house. I really got into it with Star Wars; I was a huge fan when I was 13. That’s the perfect age to be totally consumed by Star Wars. My parents didn’t like to go to movies very much, so I read a lot of the media tie-ins that were coming out to get the movie experience. I actually read the novelization of Star Wars before I saw it. I remember how excited we were when the Brian Daley Han Solo novel came out. Our public library was really good, but it had a problem of missing the first book in a series. When I read Lloyd Alexander I started with the second book in The Chronicles of Prydain. It took me forever to find the first book. It’s a big library, and really nice, but it was kind of rode hard and put away wet. There were a lot of kids in there all the time.

“When I was a kid I wrote Godzilla fanfic. I didn’t know what fanfic was, but I would make maps of Monster Island out of single sheets of typing paper that would cover the whole living room floor, things like that. After The Empire Strikes Back came out I got into writing Star Wars fan fiction. When I came to college I did want to write, but I wasn’t sure how you became a fiction writer. I’d read Irma Bombeck early on, and her humor is about her real life. That was kind of my first inkling that you could be a woman and a real person and be a writer.

“When I came to college I told people I was going to major in journalism because that was the closest thing to what I wanted to do. Some of the creative writing programs aren’t very good for genre writers, unless you’re lucky enough to find a university where they have someone who is a genre writer teaching. When I got to Texas A&M, Steven Gould lived in College Station and he was one of the teachers for the community education project for the university. They were little classes taught in university buildings that anybody could sign up for, fun things like bartending and bowling and languages and all kinds of stuff, and he was teaching science fiction and fantasy writing. I’ve known him since then; he and Laura Mixon married while he was living there, and she lived there for a while too before they moved to New York.

“I took a class with him, and wrote one of my first fantasy stories. I submitted work to magazines, but never got a bite, which now I think is lucky. You don’t want your derivative fantasy story haunting you years later. But you have to try. There are people in writing workshops that you want to tell, ‘You’re not going to sell this story, but you will sell something eventually, and 10 years from now you’ll thank God you didn’t sell this story.’ When you think someone has real potential, you want to encourage them. Sending stuff out is good practice, even if the story doesn’t sell, because you need to get used to the submission process, and learn how to deal with the rejection. I’ve seen people be really discouraged, but this is the process. ‘The editor actually wrote you a personal note to tell you he didn’t want it. That’s huge!’ People think success happens overnight. Some people get stuck, and they don’t move on to the next story, they just polish and resubmit. They don’t learn and move on. Your writing will change over time, and when you’re starting out, it’s hard to realize that. If you try different things, you will really evolve. That’s what you want to do. But it’s hard to understand that when you’re just starting out.

“With my first and second books, The Element of Fire and City of Bones… I’m essentially a pantser, so I just sat down and wrote. My third book, The Death of the Necromancer, was a mystery novel as well as being a fantasy, and it was not a simple plot. Mysteries have a different shape, and it also had a lot of characters. I was so in over my head and I was like, ‘Just keep swimming.’ About three-fourths of the way into the book I went back to the beginning, reread and outlined it, just so I could keep it all straight in my head.

“When you do difficult things like that, they expand new areas in your brain, and you’re able to write more complicated stories. I remember distinctly when I was writing fanfic in college and it was the first time I had written a scene where more than two people were talking. It was a scene where three or four people in the room were discussing something and I’d never done that before. I had to make a diagram, and draw where people were in the room, and start the conversation with two people and bring in the other people as I went – but after I did it once, I never had trouble doing it again. When you first start writing, you have to develop these skills. When I do writing workshops I’ll tell people that if they’re having trouble visualizing a scene, they should draw a diagram, make notes, whatever they have to do. If you have to start small with just one character and then bring in the next character, do that.

“I like teaching, but I don’t do it a lot. I’ve done writing workshops mostly at ArmadilloCon in Austin. I’ve done the WorldCon writing workshop several times over the years. I’m doing one for FenCon in Dallas. Writing workshops really helped me when I started out. I did that class with Steven Gould, and I did workshops with him and Laura Mixon, and then Rory Harper. I did Turkey City with Bruce Sterling and that was really helpful too. It helps to have workshops around conventions because there’s a built-in audience. For genre writing, in science fiction and fantasy especially, you can go to conventions and get information about how to be a writer, how publishing works, and learn about technical and writing issues. It’s incredibly helpful.

“I don’t know why I gravitated more to fantasy at first, because I really liked reading SF. A lot of the stuff I grew up reading in the ’70s and ’80s was more of a blend – categories weren’t as static then. I think we’re going back to that trend. Some of N.K. Jemisin’s books, like the Broken Earth trilogy, feel like a blend of SF and fantasy. Too rigid categories give you this idea that SF must be this and fantasy must be that, when that’s something that’s been imposed on the genre.

“When I wrote The Element of Fire, I was working for the Ocean Drilling Program doing computer support and also some COBOL programming. I wrote the novel when I was waiting for programs to run. There was a lot of time when I wasn’t helping people with computer problems to sit there and write. It was a tiny little office with gigantic mainframes crammed into most of it, and PCs, and servers. There was a giant air cleaner in the ceiling that made popping noises a lot of the time. Cold air was blasting on you. It was a very uncomfortable experience, but now that I’m working at home, I write with the TV on, because I’m so used to background noise.”

This interview and more like it in the August 2018 issue of Locus.