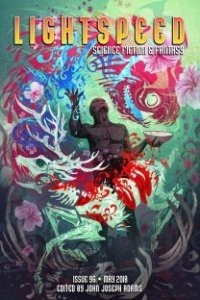 The SF in the May Lightspeed interested me most. Carolyn Ives Gilman’s “We Will Be All Right” is a very short, dark reflection on a future in which a gender-based pathogen kills men when their lovers conceive. The narrator is ready to meet her son’s girlfriend… as I said, it’s a short piece, and mostly a meditation, and quite effective in its space. Jane Lindskold‘s “A Green Moon Problem” is set on a space habitat, and concerns the legend of Tatter D’MaLeon, who can give you your wish – for a price. Jurgen Haines, an engineer who falls for a woman who likes him well enough but cares much more for her obsession with finding evidence of alien life, decides to find Tatter and pay her price – which turns out to be interest­ing and well-integrated with the nature of their personal dilemma.

In Tor.com in April, I particularly enjoyed “The Heart of Owl Abbas” by Kathleen Jennings. This is about a songwriter, Excelsior, and a mechanical singer, Nightingale. Nightingale’s voice inspires Excelsior to create particularly marvelous songs, and she is likewise inspired by his work. But her singing attracts the attention of the Little Emperor in Palace Aster, and the Nightingale feels that her voice must be heard by the most significant of audiences. Which audiences, though, are really most important? Excelsior has his own ideas, and perhaps the city of Owl Abbas has even different ideas – leading to a much different fate than the Emperor, or the city, or the Nightingale, or Excelsior might have imagined for all of them. It’s a lovely, bittersweet story, and beautifully written.

Giganotosaurus continues to feature strong work. February and March’s selections are both fine short stories (usually this site’s stories are a bit longer). AJ Fitzwater‘s “Through the Eye of the Needle” concerns a dragon (or drakon) and a woman imprisoned by a powerful woman in a sort of zoo. The dragon tells the story of the imprisoned woman’s befriending him, and her remarkable skill as a magical embroiderer of tapestries, and the hope they share for escape. Vanessa Fogg‘s “Traces of Us” is a bittersweet story about a couple, scientists who meet at Washington University (not far from my home!) and fall in love. They are both studying the brain, and eventually a means of uploading the brain… and then the woman gets cancer. The resolu­tion is not a surprise (it’s given away at the opening), but it’s quite nicely done.

The prize story is April’s “The Tale of the Ive-Ojan-Akhar’s Death” by Alex Jeffers. It’s a leisurely and lovely look at the career and life of a diplomat for the empire of Sjolussa, serving in the somewhat Chinese-derived Haisn, the Celestial Realm. This man has largely assimilated into the local culture, and his life is turned upside down by the arrival of an unpleasant new commercial envoy from Sjolussa, whose daughter quickly kills the narrator’s “sleeve dog” through too energetic play. The narrator prays for her death, then plans a visit to his favorite brothel, only to have it interrupted when he sees the detested envoy visiting a theater to watch a traditional Hais­ner production, The Tale of the Ive-Ojan-Akhar. We are given an account of that work, which deals with a long-past Empress and her involvement with demons – and somehow the result of that night is political upheaval, and the expulsion of the Sjolus­senes from Haisn (and the death of the envoy and his daughter). And then our narrator must make a new life in a new place… My account of the story doesn’t seem earth-shattering, and indeed it’s hard for me to describe the continual pleasures of the tale, bound up in the narrator’s self-involved (but gener­ally pleasant) character, the sideways revelations of the nature of Haisn’s culture, the gentle realization of the fate of the narrator (and his faithful servant) after their ejection from Haisn.

“Through the Eye of the Needle”, AJ Fitzwater (Giganotosaurus 2/18)

“We Will Be All Right”, Carolyn Ives Gilman (Lightspeed 5/18)

“The Tale of the Ive-Ojan-Akhar’s Death”, Alex Jeffers (Giganotosaurus 4/18)