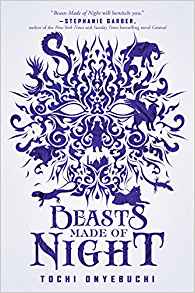 Debut author Tochi Onyebuchi draws deep on his mother’s Nigerian roots in the world-building extravaganza Beasts Made of Night. Based on the bustling metropolis of Lagos, the walled city Kos is ruled by the elite Kaya family, dominated by the priest-like Mages and suspicious of the sin-eating young aki. The royal Kayas are entitled and oblivious, the Mages cor­rupt and dangerous, and the aki are the heart of the story. Seventeen-year old Taj is the strongest of the aki and determined to hold the line for his friends and get the job done as long as he possibly can. But there is big trouble brewing in Kos, big sins bursting to be set free, and soon Taj is running for his life in the beautiful, turbulent, complicated neighborhoods he loves. Saving Kos will take everything he has and maybe cost him more than he can bear. Welcome to Toch Onyebuchi’s world, a place like no other and a true YA tour de force.

As readers immerse themselves in Kos and its purity system, which relies upon the “magic” of sin discovery by the Mages and then sin eat­ing by the aki, they will find a lot about the city that is familiar. Onyebuchi describes a place that is steeped in bazaars and outdoor living, with people filling the streets and the scents of savory foods wafting down alleyways. Food is a huge part of Taj’s life (he looooooves food), and Onyebuchi delightfully shares one mouth-watering meal after another. He also engages in plenty of descriptions about what everyone is wearing, which helps to balance out the brutality of the life-threatening battles the aki engage in. The tattoos the aki are marked with, evidence of the sins belonging to others that they have eaten, are another major factor in Kos life. Taj’s tattoos do not fade, which is unusual. They mark him as something different, which isn’t easy because being an aki in this town is already tough enough.

When Taj’s tattoos are revealed to be only one part of what makes him special, he gets sucked into dangerous palace life. There is a lot of pal­ace intrigue (of course there is a lot of palace intrigue) and Taj finds himself uncertain of who to trust among a princess, a Mage-in-training, and a bodyguard (each of whom is a dynamic and complex female character!). As the power games are slowly revealed, the fragile society that Kos was built upon begins to crumble. The rifts between rich and poor, guilty and pure, powerful and hungry widen beyond repair. And then Taj discovers what he will have to give up to save his city and who he will lose in the battle he never saw coming.

Onyebuchi has written an action-packed narrative that is great fun to read, but more im­portantly he gives readers a lot to think about in terms of politics, diversity, and elitism. He shows how hard it is to survive when every single day is about survival and how casually people can become disassociated from the pain they cause in others. There is beauty in Kos, and there is horror; there are villains aplenty and small but mighty heroes. Altogether, Beasts Made of Night is a thoughtful, thoroughly unique novel, and it heralds the arrival of a dazzling talent.