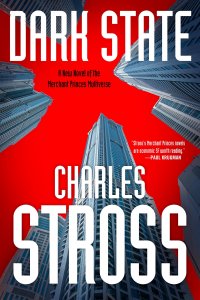 Charles Stross has been building – and remodeling and rearranging – his Merchant Princes sequence across seven novels (now in four volumes) over more than a dozen years. The first six books (or three, depending on which packaging one has read) completed a complex arc that focused primarily on how a medieval-level social-political-economic ar­rangement built on the inheritable ability to world-walk – to move across alternate time lines – was forced to modernize in a hurry, and what happened to it when it attracted the full attention of a ruthless, nuclear-armed 21st-century superpower. The sev­enth novel, last year’s Empire Games, opened a new sequence, set a generation after the destruction that climaxed the earlier books. With that book and the new entry, Dark State, the emphasis is now on the cat-and-mouse games of espionage, political intrigue, and high-stakes secret diplomacy, with a mostly-new cast of characters.

Stross implicitly acknowledges the challenges of keeping up with a complex, long-running series by supplying lots of orientation material right at the front of the book: A brief explanation of the various Time Lines; a set of Main Character Profiles; and a Principle Cast List. At the back, there’s a Glossary plus an Appendix in which he shows his homework in a long, detailed outline of the historical machinery that produced Time Line Three, where much of the action takes place. All this I take to be a signal to readers who have not had the considerable pleasure of reading the first sequence that this second cycle can be tackled out of order. It is a proposition with which I agree.

In Empire Games, adopted-daughter Rita Douglas in Time Line Two (the most like ours up to 2003) is sucked into the complex mess of paratime cloak-and-dagger business when she discovers that her birth mother is both a world-walker and an important figure in the government of a revolution­ary regime in Time Line Three, and that genetic and familial connection makes her a perfect cross-world secret agent – not that she has volunteered, exactly, given the persuasive methods available to the not-quite-our-world version of Homeland Security.

Nor is that the entire catalogue of the complication in Rita’s life: she’s gay, which in much of Time Line Two America is illegal; she’s a recessive carrier of the world-walking gene; she has been recruited by a security agency that activated the gene and turned her into a world-walker; she is the abandoned daughter of a leader of a Time Line Three government leader; and she (and her lover Angie) are both members of the “Wolf orchestra,” a multi-generational tribe of dormant East German agents left over from her line’s Cold War.

Dark State elaborates and intensifies the pres­sures on its characters. Rita, shaken by the revela­tion of her family history and a meeting with her birth mother, is returned to Time Line Three as a back-door let’s-not-have-a-nuclear-war emissary to the New American Commonwealth. That fledgling revolutionary government is facing a succession crisis as its founding leader is dying, with internal factions and external enemies threatening. Commonwealth agent and world-walker Hulius Hjorth is running a dangerously complicated operation: the extraction of Elizabeth Hanover, heir to the throne of the New British Empire, who wants out of the dynastic plans that will eat her life. Back in Time Line Two, Angie and Rita’s grandfather Kurt (a first-generation Wolf orchestra member) are trying to look out for Rita while avoiding the eye of the paranoid panopticon that is their time line’s America.

In what may be the book’s most nightmarish plot thread, Paulette Milan, Miriam’s assistant from the earlier books, is detained and interrogated in a black-site prison. Paulie is prepared to face execution rather than “being buried alive in a concrete coffin ten feet by four for years or decades to come” – until her face­less interrogator points out that “there are fates worse than a secret trial and execution”: to wit, outsourcing the sentence to a Chinese prison hospital where “they harvest one organ at a time. It can be months before they find a buyer who’s a good match for your heart or liver. But the corneas usually go first.” The fact that when Paulie agrees to cooperate they start by asking a wildly wrong question just makes it worse.

Once again, the book’s framework is spy-thriller procedural: the back-room handling measures for managing Rita (including termination options); the ugly details of Paulie’s incarceration and interroga­tion; the Wolf-orchestra protocols for maintaining connection while avoiding detection; Hulius’s elabo­rate, high-risk mission to extract Princess Elizabeth. The stakes are high – this series’ worlds are filled with powerful, ruthless organizations (only some of which are covert), following policies and protocols that are guaranteed to chew up the innocent and guilty, the loyal and treasonous, without a second thought. And it’s not just nasty humans. One time line contains, where Earth should be, a planetary-mass black hole, and whatever is lurking in its accretion disk doesn’t want to be disturbed.

The agents of darkness in Dark State are materi­alist-world counterparts of the supernatural threats, magical monsters, and mad gods of the Laundry series, all the more frightening in their materiality, their clear rootedness in the pathologies of the power-seekers, true believers, order-followers, and well-meaning guardians of established order that provide the fodder for the news cycle here in our non-fictional time line. This is meant to be (and is) edgy entertain­ment and sideways political commentary wrapped in alternate-history what-iffery, but it still gives me the willies. 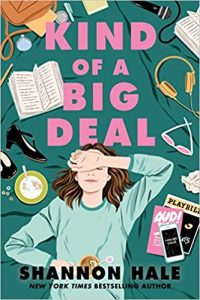