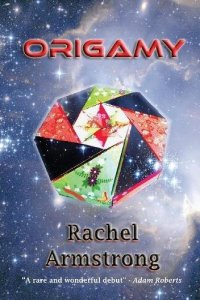 When she is not wearing her fiction-writer hat and offering us her debut SF novel, Dr. Rachel Armstrong is performing her duties as Professor of Experimental Architecture at the School of Architecture, Planning and Landscape, University of Newcastle, and, like some character out of an early William Gibson novel, lecturing via TED Talks about “living buildings” and suchlike cutting-edge concepts In other words, she is elbow-deep in futurism, and we could naturally expect her fiction to reflect this unusual savvy. Surely, we think, her first novel will resemble, oh, Annalee Newitz’s Autonomous, being ultra-dense nth-generation cyberpunk.

Well, surprise, surprise! Although Origamy is larded thickly with real science–albeit speculatively extended along semi-gonzo vectors–it’s delivered in fable form: a whimsical, half-daft, drunken-prose-poem odyssey down alien byways. The closest thing to this book might be Italo Calvino’s Cosmicomics. (And in fact, as tipoff, one character here is discovered reading Calvino’s Invisible Cities.) Maybe also if you mated Olaf Stapledon’s Starmaker with John Uri Lloyd’s Etidorhpa you’d get something similar.

First we should note the innovative format of the novel: many bite-sized sections, each with a title, some just a sentence or two, others several pages in length. But despite these continuous relaunches the flow is not herky-jerky or patchwork, but rather linear and easy to follow. The vast majority of the micro-chapters are narrated by our protagonist, Mobius–except at the end, where Mobius is transmogrified.

Who is Mobius? She is the daughter of mama Shelley and daddy Newton. (And there you have the pure allusive essence concerning the bipartite nature of SF: science via Isaac Newton, literature through Mary Shelley.) But this family is not human. For one thing, the parents are both over two hundred years old, while Mobius herself is rather a child at age eighty-four. They are “origamers,” beings of shifting shapes who inhabit the Loom Garden. An origamer is one who can “weave spacetime fabrics to discover outlandish places and events.” The Garden is a kind of omphalos containing the Loom, “a spacetime weaving apparatus…that detects, translates and displays information from the cosmos and offers access to the incomprehensible vastness of space.” Where does the fabric for weaving come from? “[G]iant copper condensers which are attuned to collect spacetime dew.” The only barrier or hinderance to the use of the Loom are entities known as spiders, who eat away at the cosmic continuum and rot the fabric of spacetime.

Mobius would be more proficient by her age at origami except she has suffered some kind of brain injury and must at her adolescent stage relearn the basics. The nature of this injury will eventually reemerge in a kind of Ouroboros ending. The climax, by the way, simultaneously brings the action to a more quotidian level, and yet extends the universality and poignance of the tale.

But the reader has a long way to go before reaching that point. We must span millennia and galaxies full of “outlandish places and events” that teach Mobius her place in creation and the nature of that all-embracing Implicate Order beast. In a way, this is a kind of Wrinkle in Time voyage of discovery, with even a “lost child” at the core. Deploying prose that is at once whimsical yet nano-precise, Armstrong will deliver visions of robots and artificial planets, the Big Bang and the Oort Cloud, terraforming enterprises and black hole explorations, and on and on, including such outrageous concepts as “a solar interstellar robotic probe…which crossed paths with a neutron mollusk…” Nor are these ventures entered into without danger and suspense.

Interspersed between the adventures are the ironically domestic familial interactions among our three origamers and some peers, as well as several little self-contained fairy tales such as the one about Miralda, a woman changed to a plant. Readers might detect a resemblance to the tall tales that Stanislaw Lem promulgated in The Cyberiad and The Star Diaries. Actually, Lem’s spirit of philosophical novelizing stands like a guardian angel over this book, as does Martin Gardner and the kind of intellectual gameplaying he indulged in. One last tutelary deity would be Lewis Carroll, as evidenced here:

In this city for two an owl-eyed man is perched in a tree. He’s writing at a desk with a raven feather. As he dips his quill in tarry ink it splatters across the page

“Why is a raven like a writing desk?” he begins.

Armstrong’s panache and brio are unflagging, as she uses a light narrative hand. But there are definite psychic travails to be undergone by Mobius, and one might in the end get a sense of James Tiptree’s “Painwise,” in which a female planetary scout is endlessly torn apart and reassembled. But ultimately, the author wants to depict the journey of the individual from nescience to knowledge as a kind of endless kindergarten, in the best sense of that institution: a place to be naive and playful and accepting of the newborn wonders of existence.

This book owes its own existence to Ian Whates and his NewCon Press, a firm which tackles what bigger, more commercial houses might shy away from, and he deserves kudos for bringing us Armstrong’s unconventional tale.

As for that hypothesized cyberpunk novel we expected at the outset? That seems to be coming also, for the closing pages of this book tell us to watch for her Invisible Ecologies, “set in a future Venice [and dealing with] the extraordinary ‘twinship’ of humanity and its settled lands.” 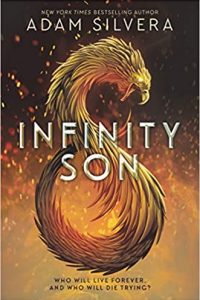 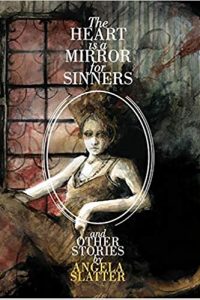