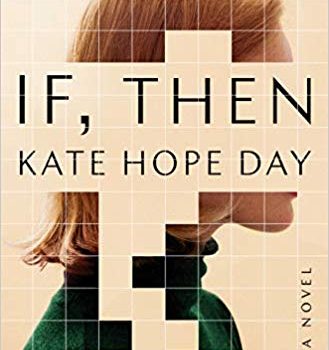 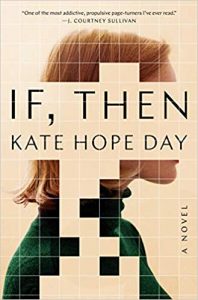 Kate Hope Day’s debut novel, If, Then, is a sliding doors narrative revolving around a group of characters living in the same neighborhood, all of whom have reached a gloomy kind of breaking point in their personal lives. Ginny, a neurosur­geon, is working herself to death and inhabits a marriage that’s on life support. Her husband, Mark, is monitoring the possibility of a major volcanic event just outside their Oregon town, and no one wants to hear his doomsaying. Samara grieves her mother’s sudden death. Cass, Samara’s next-door neighbor, cares for her newborn without respite. At first it’s difficult to keep these char­acters and their relationships straight, but as the chapters add up and the characters become easier to connect to, they fit together nicely.

Each of these people experiences minor hallu­cinations. Mark sees a version of himself who has gone feral in the forest outside of town. Samara sees her dead mother hammering a For Sale sign into the front yard. Cass sees herself pregnant with a boy instead of the daughter she already gave birth to. And Ginny sees herself in a loving relationship with one of her nurses rather than married to her husband. Each of these hallucina­tions causes the character to act in a way that, over time, brings him or her closer to the vision – Mark builds a bomb shelter in his backyard, Ginny begins an affair with the nurse – and each is accompanied by a tremor in the earth.

These are visions of an alternate reality, but the characters realize this long after the reader does, if the reader has any experience with speculative fiction whatsoever. As Cass, an advanced student of philosophy, describes it, “her life, the life she shares with Leah and Amar, is only one of an infinite number of possible lives in the multiverse. These other realities are not hypothetical. They are real. She knows this because she’s seen one of them with her own eyes – and her neighbor Mark has too.” (Mark has definitely never watched Star Trek, because he continues to believe well into the book’s second half that the other version of him is some kind of evil twin, taunting him and wish­ing him harm.) Despite this description, only two versions of reality exist in If, Then, rather than multiple possible paths.

Day connects Mark’s predictions of a volcanic event to the glimpses of parallel lives each character sees, and although the book is powerfully imag­ined, with vivid characters and organic conflicts, this supposed explanation is one of the book’s few flaws. The connection between the slippage of real­ity and the coming volcanic eruption is clear and definite, but Day never explains the how or why of it. As far as glaring problems go, that’s about it. The book is a quiet triumph of writing craft, much more about its characters and their humanity than about the supernatural hook the story hangs upon.

The narrative possibilities of a sliding doors story are as infinite as the potential universes that exist in such a story. Day settled on just two tracks, and explored them deeply, rather than trying to organize a whole platoon of alternate realities. Her choice is commendable, as someone with her skill at characterization and mood has done better with an intimate story than she likely could have with a sprawling multiverse. She might also be try­ing to express a particular metaphor in doing so. Cass, in allowing someone to babysit her daughter, desperately wants to be out on the errand she’s running and at home with the baby. She wants to be in two places at once. Ginny, too, expresses this desire; although she loves her son, she often finds herself abandoning him to his father’s care while she focuses on her job, and then regrets not being able to do both.

It’s as if Day’s imagination of alternate realities ties directly to the conflict of modern motherhood: wanting to work on something professionally meaningful, away from the crushing demands of child-rearing, while simultaneously wanting to be at home with a precious child, away from the impersonal demands of professional life. After the crisis of book’s climax, the newspaper prints stories about strange things happening beforehand: “Children told stories of parents being in two places at once.” This is the dream for working mothers, being able to pursue career and family at the same time – but for now this is impossible, since we don’t live in Kate Hope Day’s imagination. For all we know, that is – perhaps we’re one earthquake away from a different reality.