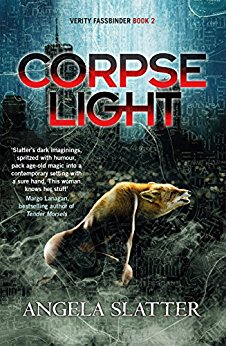 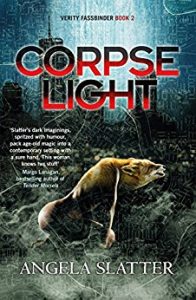 In Corpselight, second of Angela Slatter’s Verity Fassbinder series, the hybrid Weyrd/Normal heroine and narrator must keep on with urban-fantastical detection (in the screwy mod­ern Australian city she calls “Brisneyland”) while in the later stages of pregnancy. Her physical and mental state is a lot like Cedar’s: awkward, foul-mouthed, nervous, veering be­tween elation and self-doubt – and the unspo­ken question, What the hell is wrong with me? And amongst the banter there’s talk of doom, like a quip from the taxi driver who ferries her around: “After the Apocalypse there’ll just be cockroaches and Datsun Stanzas.”

Book One Vigil exposed her late father as a secretly monstrous ancient dark soul. Now her chief source of trauma is discovering her hu­man mother faked death (to vanish long before Verity ever knew her) and spent those missing years doing hatchet jobs for a self-proclaimed Guardian of the Underworld. It’s enough to stir up fears of Verity’s own fetus developing hooves and horns – though her husband is an even-tempered Normal, as unequivocally good as Cedar’s boyfriend (except when her overac­tive imagination pictures him in a wild array of supernatural guises).

The case introduced with a casual stakeout gradually develops into a fiendish drama that seems to echo brutal deeds now attributed to both of Verity’s parents. Initially she’s probing one woman’s claims for Unnatural Happen­stance – reluctantly paid out by an insurer whose client list includes both Naturals and Weyrd – when her home in a classy neighborhood, far from the ravages of hurricane, flood, or bad plumbing, keeps getting swamped with stink­ing mud. Next a few strange murders (“drown­ings” in a city whose Weyrd include each type of elemental, reshaped for urban life) raise the prospect of water spirits run amok. But the title’s “corpse lights” prompt Verity to look for an­swers elsewhere, since they only stick around when Death – the Boatman in Vigil – can’t ferry badly abused souls into the afterlife. These plot­lines finally interweave and merge, after assault in an alley provokes the slightly premature birth of her child. All that follows is absolutely vi­tal for everyone Verity loves, in a world forever changed.