SF novel, first published in Cuba in 1990 and here translated into English by Nick Caistor and Hebe Powell, set in a future in which the Communist Federation has defeated the Capitalist Empire.
• The publisher’s site has this description, which calls it the author’s “magnum opus.”
• The Publishers Weekly review is mixed: “De Rojas is perfectly willing to ask hard questions, and this struggle for the soul of humankind’s future will leave readers thinking long after the last page is turned, but as a work of fiction, it never quite comes together.”

Humorous fantasy novel, apparently first of a series, about living in a world ruled by dragons.
• The Amazon description notes that Hollins is a pseudonym.
• Hachette’s site has this description.
• Publishers Weekly gives it a starred review: “Hollins’s seat-of-the-pants fantasy comedy snowballs wildly into a glorious disaster of fire, magic, multiple threats to people’s intestines, and fun—for the reader, if not the characters.”

Anthology of 13 stories first published in the Irish SF magazine Albedo One over the past decade.
• Authors include Gill Alderman, Tais Teng, Neil Williamson, and Mike O’Driscoll.
• The magazine’s site has this description.
• The book is also listed on Amazon.com.

Horror novel about two widowers drawn to a mysterious creek in upstate New York.
• Word Horde’s site has this description.
• The Publishers Weekly review is mixed: “Shifting between past and present, Langan builds terrifying scenes…”

First English translation of a political SF novel, written in the early 1970s and not published in Russia until 1988-89. It’s about an experimental city, populated by people plucked from various times in the 20th century, and run by inscrutable Mentors.
• The publisher’s site has this description, which calls it the brothers’ “magnus opus”.
• The Publishers Weekly review concludes, “The Strugatsky Brothers criticize not only Communism but all tyrannical governments in a startlingly original microcosm that captures humanity’s despair and resolve. … This unsettling and intelligent novel’s chief terror resides in its underlying ideas.”
• A hardcover edition is also available.

Collection of two novellas, “The Dancer on the Stairs” and “The Burning Furrow”.
• Aqueduct’s site has this description with blurbs from A.M. Dellamonica and Amy Thomson.
• Publishers Weekly gives it a starred review: “Tolmie’s investigations of identity, place, and personal meaning are a delight to read and a great contribution to the genre.”

Sue Burke: Aliens Among Us 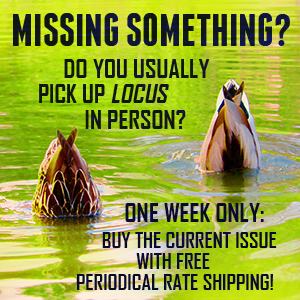 Based on the Valiant comic book series of the same name, Bloodshot is about a US Marine, Ray Garrison (Vin Diesel), who is brought back from the dead through the application of nanotechnology, which endows him with superhuman abilities. The film initially follows all the standard sci-fi action fare as Garrison pieces together what has happened to him, and what he can do now, and it’s exactly as terrible as

Your first novel Magic for Liars is forthcoming from Tor in June (exciting!) and combines detective story and magic school tropes. Tell us a bit about the book. What appeals to you about those particular tropes? Did working with both create extra challenges or just give you more elements to play with? Magic for Liars follows Ivy Gamble, P.I., as she investigates the murder of a faculty member at a