The author’s signature blend of ecological SF and thriller elements shines in this sequel to Arctic Rising. Former spy Prudence ‘‘Roo’’ Jones, a supporting character in the first volume, takes center stage here when he’s forced to come out of retirement to investigate the murder of an old colleague against a background of catastrophic climate change in the Caribbean, with Buckell’s roots in the region providing richness and authenticity to the setting.

The fourth volume in the Expanse series by Corey (AKA Daniel Abraham & Ty Franck) sees humanity leaving the solar system to colonize worlds abandoned long ago by mysterious aliens, with a focus on the tribulations of refugees settling a planet dubbed New Terra. ‘‘It’s always a pleasure (about which I refuse to feel guilty) to have at hand a commodious story-space waiting to be filled with wonders and adventures.’’ [Russell Letson]

The latest in the annual anthology includes 32 of the best stories from 2013, with work by some of the biggest names and most talented voices in the genres, including Laird Barron, Elizabeth Bear, Neil Gaiman, Caitlín R. Kiernan, Lisa Tuttle, and Kaaron Warren. Includes an introduction by the editor.

The urban fantasy Iron Druid Chronicles is still going strong in its seventh volume, with hero Atticus O’Sullivan’s apprentice Granuaile finally becoming a full druid in her own right and Atticus’s old mentor Owen Kennedy, long frozen in time, returned to life to join the ongoing battle against Loki and other hostile gods.

The latest big cross-genre anthology from the heavyweight editorial duo includes 21 stories about rogues, rakes, thieves, and swashbucklers in the genres of fantasy, SF, and crime. Includes a story by Martin set in the world of A Song of Ice and Fire, a Kingkiller Chronicles story by Patrick Rothfuss, and a Neverwhere story by Neil Gaiman, plus work by Garth Nix, Cherie Priest, Connie Willis, Carrie Vaughn, and more. ‘‘Great stories that slice through the restrictions of genre.’’ [Adrienne Martini]

Locus’s own Tim Pratt pens this cheeky contemporary fantasy novel about a recently graduated artist who unexpectedly inherits a big house in the North Carolina mountains – and finds it full of magical junk that attracts monsters and relatives she didn’t know she had. Originally published as an e-serial (2/14). ‘‘Tim Pratt’s writing just keeps getting better and better…the writing is tight and sassy without wasting one word – and he makes it seem easy.’’ [Adrienne Martini]

This debut novel by the noted satirical story writer is a rollicking humorous dystopia about a former corporate mercenary – the eponymous Koko – forced to come out of retirement to escape enemies sent to the far-future brothel she runs to kill her. First in a series. ‘‘Shea has created an intriguing, 400-years in the future world that is gritty and violent, yet totally grounded.’’ [Adrienne Martini]

This first book in an urban fantasy trilogy is set in the world of story ‘‘The Osteomancer’s Son’’, in an alternate Southern California where magic can be extracted from the bones of extinct mythological creatures. Thief Daniel Blackland, son of a murdered osteomancer, puts together a motley crew of criminals to pull off an impossible heist: breaking into the magic-rich vault of the tyrannical Hierophant himself. The author ‘‘showcases his wit and humanity as well as his knack for character, and he works the magic that the best writers can: the story feels alive just a few pages in.’’ [Adrienne Martini]

The second volume in this reprint anthology series draws 27 of the best stories from the long history of F&SF, the earliest from 1950 and the latest from 2011. Includes stories by Paolo Bacigalupi, Harlan Ellison, Robert A. Heinlein, Zenna Henderson, Ken Liu, Stephen King, and more, with a foreword by the editor and an introduction by critic Michael Dirda. ‘‘F&SF has frequently been the most reliable place in the genre to find quality speculative work written to a high literary standard.’’ [Gardner Dozois] 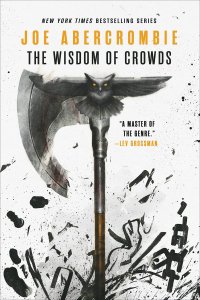 Michael Dirda was born in Lorain, Ohio. He attended Oberlin College, from which he graduated with Highest Honors in English in 1970, and then taught English in Marseille, France on a Fulbright Scholarship in 1970-71. The following year he went onto graduate school at Cornell University, earning his PhD in comparative literature in 1977 (with concentrations on medieval studies and European romanticism). After working as a technical writer and English