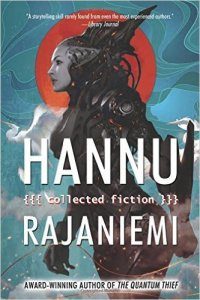 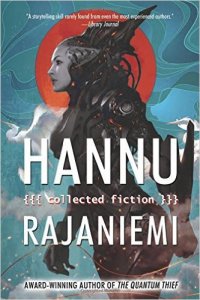 Despite a well-deserved reputation on the basis of his Quantum Thief trilogy, Hannu Rajaniemi has actually published only a handful of stories in his first decade as a writer, and only a few of those reached a wide audience by appearing in Jonathan Strahan anthologies or making it into one or more ‘‘year’s bests.’’ Others showed up in venues as obscure as a science festival or local Scottish publications, and a few even on Twitter. Nearly all of them, plus three previously unpublished stories, are included in Collected Fiction (an unnervingly definitive title for a young writer), and they still add up to a book of only 238 pages, suggesting that the principle of inclusiveness may have been as much a matter of necessity as of choice. Inclusive collections, in which a writer essentially lays out his entire career for inspection, have the advantage of allowing us to feel the fabric, to recognize what is radically new (and there’s a fair amount of that with Rajaniemi) as well as what is familiar – and, at least in this case, to watch in real time his technical development as a writer. But, to continue that feeling-the-fabric metaphor, it also inevitably has something of the aura of a yard sale: there are the treasures, and then there are the weird lamps.

Don’t get me wrong; the best stories here are very good indeed. ‘‘His Master’s Voice’’ has already been anthologized three times, and is as rich in posthuman (almost post-biological) invention as his novels, and ‘‘Tyche and the Ants’’ (from Strahan’s Edge of Infinity and included in Dozois’s Year’s Best) is perhaps the best example in short form of how Rajaniemi can deploy his radically defamiliarized worlds in the service of a tale that is both humanly engaging and genuinely touching. ‘‘Elegy for a Young Elk’’ (three year’s bests) does much the same sort of thing, but also shows how Rajaniemi can make effective use of the natural settings of his native Finland as well as inventing a strikingly original postsingularity city of the sort that was so convincing in the novels. ‘‘The Server and the Dragon’’ (anthologized three times since its appearance in Strahan’s Engineering Infinity) is a tour de force of finding lyricism in a story that features no human characters at all, and that practically takes us beyond Greg Egan territory in telling of a lonely ‘‘server’’ sent out to seed the universe from a ‘‘darkship,’’ and its encounter with an equally abstract (but at least visualizable) ‘‘dragon.’’ ‘‘Deus ex Homine’’ (two year’s bests) concerns a ‘‘godplague’’ and an ongoing war involving AIs and humans. These stories alone are enough to demonstrate Rajaniemi’s strikingly original talent.

At the same time, having virtually all of an author’s short fiction on display, from a career of little over a decade, inevitably reveals repetitive habits and narrative tricks that I suspect Rajaniemi will eventually move beyond. For one thing – and this is as true of the novels as of some of these stories – Rajaniemi often hangs his densely original invented worlds on the simplest of old-fashioned narrative frameworks. The Quantum Thief was at core a Maurice LeBlanc-influenced story of a boy detective and a master thief, and ‘‘His Master’s Voice’’ is basically an almost Disney-simple tale of a brave cat and dog who rescue their master, despite its conceptual fireworks. Similarly, ‘‘Deus Ex Homine’’ may involve a recovering ‘‘god’’ and a futuristic war, but it also has a narrator whose girlfriend comes home on leave and who doesn’t get along with her parents. ‘‘Tyche and the Ants’’ is nearly a children’s story about a girl whose life among her virtual friends conceals from her the fact that her parents are long dead, and she’s been alone on the moon for years.

‘‘Tyche and the Ants’’ exemplifies another of Rajaniemi’s writing-workshop habits: beginning stories with one-sentence paragraphs so formulaic they almost look programmed: one temporal preposition or time code, two characters introduced, and an unexplained allusion that serves as a hook: ‘‘The ants arrived on the moon on the same day Tyche went through the Secret Door to give a ruby to the Magician.’’ Or, ‘‘The moon suit came back to Hazel the same night Pete was buried at sea’’ (‘‘The Haunting of Apollo A7LB’’, a not-too-convincing haunted spacesuit tale). Or, ‘‘On the day they finally got the Cathedral’s mermaid bone factory working, Kev told Raija he was not going to come back’’ (‘‘The Jugaad Cathedral’’, which combines a social-mediated world with a Minecraft-like virtuality). Or, ‘‘The night before Kuovi was supposed to fly home, the four of them went to bring back Bibi’s soul’’ (about a girl whose dead friend survives in an elaborate app), and so on, to the point of tiresomeness.

But for readers already familiar with Rajaniemi’s rich worlds of posthumans and utility fogs (which show up in a couple of stories here, as they do in the novels), the most interesting revelation in Collected Fiction might be his use of Finnish settings and folklore. ‘‘The Viper Blanket’’ concerns a family shunned because of their reputed link to the underworld god Tuoni, while the protagonist of ‘‘Fisher of Men’’ has to contend with a mythical sea-beast called Iku-Turso, and in ‘‘The Oldest Game’’ a recovering alcoholic returning to his father’s farm to commit suicide encounters the grain-god Pellonpekko. ‘‘Paris in Love’’ is a rather thin piece in which a vacationing Finn literally falls in love with the city, which somehow follows him home, its landmarks sprouting up in the bleak landscape of a Finnish autumn. Stories like these suggest interesting and different directions of Rajaniemi’s fiction, as do his more experimental pieces like ‘‘Invisible Planets’’, apparently inspired by Calvino’s Invisible Cities but really more in the tone of his Cosmicomics, and a version of ‘‘Snow White’’ derived from a neuroscience experiment in which the reader’s brain responses supposedly direct the movement of the story. There is also a selection of his Twitter-length microfictions, which range from the delightful to the merely contorted. The longest original story here, ‘‘Skywalker of Earth’’, suggests that Rajaniemi may have an interest in archaic SF pulp as well as older mystery novels. It concerns a young NSA agent sent to interview an aging and reclusive physicist, who finds herself caught up in a space opera conflict dating from the 1920s, but with enormous stakes. It’s lightweight fun, but weirdly makes you wonder what a collaboration between Rajaniemi and Doc Smith might look like – it would probably look like a hoot. Collected Fiction is an uneven collection, and may be a bit premature for a young writer still experimenting with voice and balance, but there’s little doubt that Rajaniemi at his best is an imposing talent.