Husband-and-wife writing teams are pretty darn rare, but not unknown. The most famous in our genre is, of course, that of Henry Kuttner and C. L. Moore, who were a true creative dyad. A famous anecdote related how one would step away from the typewriter in mid-sentence, and the other would sit down in the seat and take over seamlessly. I am unsure whether Edmond Hamilton and Leigh Brackett ever worked together on a story. Catherine and Sprague de Camp brought out some fiction under a joint byline, as did Poul and Karen Anderson. And recently Mike Carey might have performed an unprecedented feat by putting out The Steel Seraglio, co-written with wife Linda Carey and daughter Louise Carey!

Today’s book presents another such dynamic dictionary-wielding duo, Rachel and Mike Grinti. I’m pleased to report that their yoked voices are truly harmonious and organic. They have produced a very amiable, engaging, small-scale fantasy, praiseworthy both for its entertaining qualities and its “done in one” remit. Although not technically a YA, the book has an overall texture and tone akin to the best of Andre Norton, a writer whom many adult readers certainly and justifiably esteem. Toss in a smidgen of Le Guin and a dash of Robert E. Howard, and you have a unique and flavorful combination.

The book’s setting is refreshingly different, an archipelago nation known as the Five-and-One Islands. Our baseline Polynesia of historical familiarity has been underutilized as a template in fantasy fiction, and this world the Grintis conjure—of beaches and sarongs, hot sun and magical ships built of living coral—is a nice change from the quasi-European frigid forests of so many Tolkienesque sagas.

The young, unblooded and somewhat hesitant King Azi is making a mandated circuit of his realm looking for a bride. He chances to fall for Jala, a feisty gal his own age and of the Bardo tribe. (There are five contentious tribes that work reluctantly together to make up the small empire.) After a swift but vivid courtship, they are married, and Jala—whose viewpoint channels the action, save for brief and generally graceful jumps to Azi’s consciousness, when needed—is off to the royal court. There, she encounters ancient lines of rivalry, but proves herself somewhat Machiavellian and take-charge as well.

But the intra-island disputes quickly recede into the background, as the mainland empire of the Hashon declare magical war on the nesiotes. The Five-and-One crowd keep their economy robust by raiding the mainland, and on a recent trip they inadvertently came into illicit possession of the most sacred book of the Hashons, the Anka. (Ironically so, for the islanders do not even know how to read it, or even possess their own literacy, relying instead on an oral transmission of their culture.) Now the Hashons will stop at nothing to regain their religious icon. And it seems that only Jala can end the war, by immense sacrifice.

The Grintis have a way of dividing their story up into segments that transition to something different just when the reader is convinced he has sussed out the direction of the book. The first fifty pages or so, devoted to affairs of the heart, make the book seem initially like a fantasy romance. Then when the scene shifts to the court, we expect to get a tale exclusively of royal intrigue. But then war breaks out, and we are in the zone of martial prowess and contending polities. Finally, when Jala embarks on a mission to the mainland—to Constant City, a harsh domain of weird living Masks that form a quasi-technology—we get a tale of culture clash and demiurgic dominance. Then, to top it all off, the Grintis successfully knot all four threads together by the end.

The characterization here is bright and solid. Jala, of course, achieves the most roundedness and depth. But Azi is close behind. The subsidiary cast is all sharp-edged and believable, from Jala’s over-ambitious father, to Azi’s suspicious advisor, Lord Inas, to a self-serving wizard named Askel. Particularly resonant is the portrait of Jala’s best friend, Marjani, who loves Jala along certain vectors that can never be satisfied, and along others that are stronger and nobler than mere lust.

Mike and Rachel Grinti construct a colorful and believable culture twice over, once for the islanders (whose legendary backstory is well fleshed out also) and once for the Hashon, the latter of whom are truly creepy and alien. All the dialogue is nicely wrought and to the point, useful for plot advancement, revelatory of character, and indicative of various contrasting worldviews. Their prose is unobtrusively rock-solid, though perhaps with a little less poetry and awesomeness and heart-sickness than some of the more magical and emotional moments might benefit from. Judged overall, this jointly composed novel reveals a crackerjack team at work, gifting us with a surprising and riveting vest-pocket fantasy that does not need sprawl and excess to succeed. 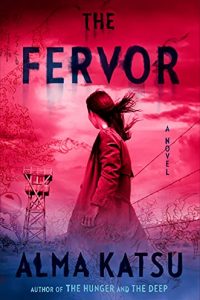