Tropes like royal pomp, treason, and fear of magic all came to fantasy from human history, and writers can still make good use of dusty annals. Jeanette Winterson’s short novel The Daylight Gate (published in the UK last year) tackles the jittery years of Protestantism’s first hold in England, where mobs could view both witches and Catholics with the deep suspicion we now reserve for Arab terrorists. Guy Fawke’s scheme to blow up Parliament in the Gunpowder Plot (1605) only increased the frenzy. This book centers on a genuine event, the Trial of the Lancashire Witches, 1612 – ‘‘the first witch trial to be documented.’’ Catholicism lingered up North, along with witchcraft and a host of rebels too widely scattered and obstinate to yield meekly to King James’s Men.

Winterson brings this hotbed of mundane horrors and superstition into the realm of dark fantasy without having to amp things up much (her lean, powerful prose has its own dark beauty). Though some of the Lancashire coven are crude peasant women, as brutal as their enemies, they hold a link to other worlds – that Gate – along with rituals that aren’t all pre-Christian nonsense. The mostly invented background and persona for Alice Nutter, the ‘‘gentlewoman’’ eventually hanged and burned along with them, has quiet hints of the occult: an unnaturally extended life, and connections to a more highbrow branch of wizardry (like Elizabeth’s court alchemist and doctor John Dee, now deceased).

Other references that look beyond the haunted forest and grubby town where most of The Daylight Gate takes place remind us of the era’s startling ironies. While Protestants sought to clamp down on the frivolous pursuit of earthly pleasures, William Shakespeare was busy writing plays. A patrician acquaintance informs Alice that a new one is about to debut in London. She knows nothing of such stuff, so he gives her the title and a little more: ‘‘The Tempest. I am told it is a play about magick.’’ 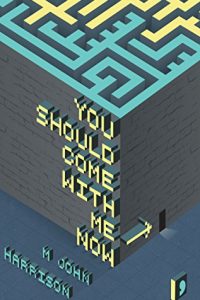 Gary K. Wolfe Reviews You Should Come With Me Now: Stories of Ghosts by M. John Harrison