January 2012—
Issue 86
• Issue 86 has stories by Marissa Lingen and E. Catherine Tobler, and an audio podcast by Seth Dickinson.

The Bulletin of the Science Fiction and Fantasy Writers of America 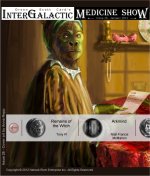 January 2012—
Issue 26, cover art by Anna Repp
• Stories in this issue are by Tony Pi, Niall Francis McMahon, K.G. Jewell, Amanda C. Davis, and Brontops Baruq.
• There’s also an excerpt from Orson Scott Card’s Ruins, a YA story by David Lubar, and an interview with Carrie Vaughn by Darrell Schweitzer.

December 2011—
Issue 280, Vol. 24 No. 4, $5, 24pp
• This special “October & Atrocity” issue features an essay by Tom Vaine about J.G. Ballard’s The Atrocity Exhibition, and an essay by Christopher S. Kovacs about Roger Zelazny’s A Night in the Lonesome October.
• Other essays are by Victoria Balloon, interviewing Thomas Clareson; Brian Aldiss, on William Golding; Ron Drummon, on Joanna Russ; and Michael Swanwick, on Will Jenkins.
• Reviews, by Jen Gunnels, Darrell Schweitzer, Peter Rawlik, Edward James, and Dan’l Danehy-Oakes, cover a play, a film, and books by Tem, Egan, Strahan, and Weber.
• David G. Hartwell’s editorial discusses various recent changes, including the change of printer that caused this issue to be delayed.

mid-January 2012—
• This issue features an invitation to Vote for SF Site’s Readers’ Choice Awards for 2011.
• Reviews include Trent Walters on Paul Di Filippo, Seamus Sweeney on Kafkaesque, Richard A. Lupoff on Peter Cannon, Nathan Brazil on Ari Marmell, among others.
• There are also magazine and audiobook reviews, and columns by Neil Walsh and Rick Klaw & Mark London Williams.

Oct.-Dec. 2011—
Issue 34.4, $5, 52pp, cover art by Denny E. Marshall
• This issue has poetry by Michael Fosburg, G.O. Clark, David Lunde, Robert Borski, and many others, plus a separate “Interplay” section guest-edited by Elissa Malcohn, with works by Greg Beatty, Geoffrey A. Landis, Robert Frazier, and many others.
• Features include a short editorial by Marge Simon, a President’s Message by David C. Kopaska-Merkel, a new “Stealth SF” column by Denise Dumars, small press reviews, and a con report by Elissa Malcohn.

January 2012—
• Posts so far this month include three stories: MonitorBot and the King of Pop by Jessica Barber, In the Cold by Kelly Jennings, and Recognizing Gabe: un cuento de hadas by Alberto Yáñez.
• There’s also a column about kipple by Matthew Cheney, a column about gaming by Robyn Fleming, poetry by Shannon Connor Winward, Michele Bannister, and Tony Grist, and reviews, including 2011 In Review with comments from Niall Harrison, L. Timmel Duchamp, Roz Kaveney, Paul Kincaid, Farah Mendlesohn, Adam Roberts, and many others. 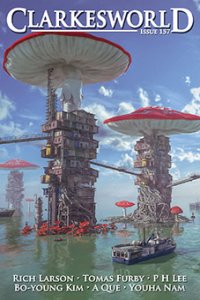 Five books that really evoke ship life I grew up on a boat. Tight quarters, sparse living. It wasn’t living aboard a spaceship, and it wasn’t military naval service, but it was a taste of what it’s like to keep your own environment with you. I also spend time working around crew on other ships of various sizes. And one thing that resonates with me are books that give me