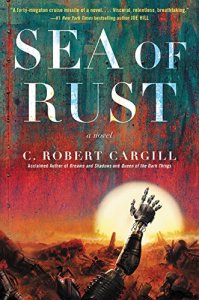 Robert Cargill, Sea of Rust (Harper Voyager US/Gollancz UK 9/17) Robots rule the world in this action-filled, post-apocalyptic SF novel, a “robot western” set in a world where robots wiped out mankind years before. Brittle scavenges the wastelands for parts, one of a dwindling few determined not to join the shared consciousness of the One World Intelligences warring for dominance.

Jeffrey Ford, The Twilight Pariah (Tor.com Publishing 9/17) College students plan to excavate the grounds of a long-deserted mansion – not a striking plot for a horror story, but Ford brings extra depth to this novella, both in plot and “as is usually the case with Ford, the presence of sentences we can admire and characters we feel we could have a beer with.” [Gary K. Wolfe]

Kat Howard, An Unkindness of Magicians (Saga Press 9/17) Magicians in New York maneuver in preparation for a battle for leadership in this fascinating and complex fantasy set in a modern world where the actual magic has gone wrong. “An Unkindness of Magicians is a really good book. Its characters come vividly alive, its prose is precisely observed, and it’s both tense and incredibly compelling.” [Liz Bourke]

Dave Hutchinson, Acadie (Tor.com Publishing 9/17) Ingenious ideas, a quirky protagonist, and a startling conclusion power this tight-packed space-opera novella about a colony established centuries before by a ren­egade genetic engineer, now rediscovered by original humans determined to wipe them out.

Kij Johnson, The River Bank (Small Beer Press 9/17) Kenneth Grahame’s children’s classic The Wind in the Willows gets a charming sequel from Kij Johnson, who even adds a likeable pair of females to the mix of talking-animal characters. “The delicate balance of challenging the assumptions of a beloved classic while retaining the oracular charm of that classic seems almost effortless in Johnson’s hands.” [Gary K. Wolfe]

Maggie Shen King, An Excess Male (Harper Voyager 9/17) King’s impressive first novel explores the implica­tions of China’s huge gender gap, with millions more males than females, in this near-future tale of one man’s struggle to become a third husband — and then to bal­ance the needs of his family and those of the state. “I was impressed by this book’s unusual engagement with complex political issues, Its complex characters, and its largely elegant plot development…King has challenged herself with particularly difficult writing gymnastics. I’m not the right person to say whether she lands it perfectly, but it’s a beautifully executed aerial.” [Rachel Swirsky]

Ann Leckie, Provenance (Orbit 9/17) Leckie returns to the far future of her award-winning Ancillary trilogy, for a standalone SF mystery that digs into this universe’s interstellar politics from a new perspective. Ingray seeks higher family status, but her plan to get a thief out of an unescapable prison goes oddly wrong, only the first of many entertaining complications involving false identities, family secrets, political rivalries, alien diplomacy, and murder.

Ken MacLeod, The Corporation Wars: Emergence (Orbit US 9/17) This action-packed SF trilogy wraps up with a bang, adding alien lifeforms to the fractured factions in this struggle between corporations, their rebelling self-aware robots, and the uploaded human consciousnesses (ex-terrorists from two factions) sent to fight them. “This triple-decker delivers the kind of smart, funny, ingenious, brain-teasing pleasure that one expects from Ken MacLeod.” [Russell Letson]

Annalee Newitz, Autonomous (Tor 9/17) First-novelist Newitz delivers an action-packed SF thriller dealing with Big Pharma and free will in robots. Drug pirate Judith Chen unwittingly releases a cheap version of a drug that turns users into extreme workaholics, even to the point of death, and has to evade an agent with an AI military-grade robot while searching for an antidote. “One of the most accomplished debut novels of the year.” [Gary K. Wolfe]

Jonathan Strahan, ed., Infinity Wars (Solaris 9/17) Noted editor Strahan returns with his sixth original an­thology in the Infinity Project series, this time featuring 15 stories of space opera and military SF, by authors including Nancy Kress, Elizabeth Bear, Garth Nix, and Peter Watts. “I’d have to say at this point that Jonathan Strahan has once again managed to edit the best original SF anthology of the year.” [Gardner Dozois]

Sage Walker, The Man in the Tree (Tor 9/17) Hard SF mixes with police-procedural mystery in this near-future novel of the generation ship Kybele and a death before launch that threatens the whole mission, which might be mankind’s last hope of survival. Incident Analyst Helt Borresen investigates, only to find the woman he’s fallen for is his prime suspect.

David Walton, The Genius Plague (Pyr 10/17) Spores star in this fast-paced and thought-provoking SF thriller of a fungal plague that makes survivors smarter, but also causes them to work towards a secret common goal, leaving two brothers in conflict over whether this is the next step in human evolution – or the end of mankind.

Walter Jon Williams, Quillifer (Saga Press 10/17) Williams’ deft hand with historical adventure shows in this fantasy novel, the first in a series featuring the title character, an engaging rogue with a talent for getting into trouble. The fantasy is restrained (aside from one goddess), making this “for the most part a thoroughly en­joyable series of historical adventures in a faux-Europe that is as meticulous in its details as it is vague in time and place.” [Gary K. Wolfe]

Jim Minz is an editor at Baen Books. I’ve had a fair amount of experience at polluting young minds with genre fiction, since I have more than a dozen nephews and nieces, not to mention children of my own–though my kids are still a bit young for some of my favorites. And the best part is how grateful my siblings are for turning their kids on to reading. You want