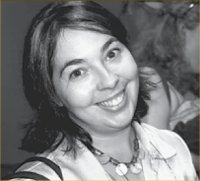 Alisa Krasnostein is an environmental engineer by day, and runs indie publishing house Twelfth Planet Press by night. She is also Executive Editor at the review website Aussie Specfic in Focus! and part of the Galactic Suburbia Podcast Team. In her spare time she is a critic, reader, reviewer, runner, environmentalist, knitter, quilter and puppy lover. 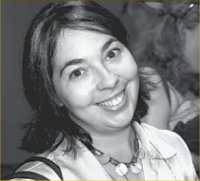 Tell us a little about Twelfth Planet Press – when and why did you start it, and has it turned out like you hoped?
In 2005 I saw the need for a critical, independent review outlet in the Australian specfic community and launched the Australian Specfic in Focus! review website. After that I had a go at electronic publishing with a shared world webzine called New Ceres which published two issues on an interactive website for a future world stuck inside an 18th century culture. Next there was a YA ezine called Shiny which produced 6 issues in its run. I feel that the electronic publishing was a little too ahead of its time, as Australian readers are only starting to embrace electronic formats now – there just wasn’t enough support for them five years ago. In 2007, I officially started up Twelfth Planet Press and began to publish in hard copy. I wanted to provide a market for top quality Australian fiction, and showcase that to the international scene. I really believed, and still do, that there is a lot of under-appreciated talent in the Australian writing scene and I wanted to play a part in fostering new talent, helping to nurture emerging talent and promote Australian work to the rest of the world. As an avid hard science fiction reader I also wanted to address the gender imbalance in science fiction by being an advocate, a female publisher and editor and reader. I’ve never really had to work at that aspect as the balance has always come about naturally. So far, publishing is a lot of fun! I love working with writers, editors and designers and am enthralled by the energy and creativity of the Twelfth Planet Press family. I am proud of the books we have produced so far, and for how well we have so far been received – and as ever I have epic ambitions for the future.

You’ve been editing a lot of anthologies lately. How do you decide which anthologies to do? Commercial viability, filling an under-served niche, personal passion, or what?
Anthologies seemed like a really good way to start a publishing house. An anthology enables me to work with between 15 and 20 authors on one project, meaning I can learn a lot about a variety of writers in a short period of time. I look for themes or ideas for anthologies that I find intellectually interesting and stimulating. I try to find conceits that will inspire ideas in writers so that they write works especially for my projects – I think it keeps the work fresh and current. I also keep a keen eye on what anthologies are on the market – I don’t want to produce a book that is going to be lost among many of the same theme but I also don’t want to pick a theme, or subgenre so obscure that no one wants to write for it or read it.

You’re Australian, and publish a lot of Australian writers. Are there unique qualities to speculative fiction written by Australians?
Yes and no. I recently published Sprawl, an anthology of fantasy stories set in Australian suburbia and I think this book has a very distinct cultural voice and experience. Some reviews have shown that aspects we take for granted here (like cell phone reception being patchy even in metropolitan suburbs) do not translate to non-Australian readers at all. On the other hand, I think there are many Australians who write in fantastical or science fictional settings that could be anywhere and written by anyone of any nationality. Australian writers are often honest and gritty in their writing, with dark humour and grim perspectives. Australians also tend to like to play a lot more with genre and subgenre boundaries which can be confronting to some readers or editors.

Your Twelfth Planet Doubles feature two novellas or novelettes printed dos-a-dos (back to back, with two covers). Why did you choose this format, and has it been successful for you?
I have to admit that my preferred story length sits somewhere between the novelette and novella. When I started to understand that these stories are hard to find a market for, I wanted to see if it could be a product that could be viable for an indie press. I also really like the length for writers to experiment in style and form and to use as a stepping stone to novel length. The doubles format is a nod to the Ace Doubles, which I love the packaging of – fits in your pocket, and two little novels for the size of one! At Twelfth Planet Press, I’ve tried to pair works that may not appear obvious to be paired with, but I think offers the chance to expose new readers or genres to more than their usual fare. Above/Below is the first double we’ve published where the two stories are interconnected and tell a bigger story as a whole. And has proved to be a really interesting and gripping way to present a story.

Any exciting new titles or projects coming from Twelfth Planet that people should keep an eye out for?
We’re just about to release the third volume in our Twelve Planets quartets series – 12 boutique collections by some of Australia’s finest short story writers, to be released over 2011 and 2012. The first two volumes are Nightsiders by Sue Isle, drawing a post-apocalyptic climate changed Western Australia and Love and Romanpunk by Tansy Rayner Roberts who has been described as ‘‘Connie Willis meets Gail Carriger over much more than a cup of tea.’’ The third volume, out in July, is Lucy Sussex’s Thief of Lives. Coming collections will feature works by Margo Lanagan, Rosaleen Love, Deborah Biancotti, Kaaron Warren, Cat Sparks, Kirstyn McDermott, Narrelle M. Harris, Thoraiya Dyer, and Stephanie Campisi. I’m enormously excited by this project because the four story format allows a lot of freedom to the writers, and they are producing some amazing new work for me. I was careful to get a balance so we have a mixture of established names as well as new talent, covering several generations of Australian speculative fiction.

Is there anything else you’d like our readers to know about you or the work you do?
Probably the most important aspect for your readers based in the US and other countries outside Australia is that I’m working hard to expand my e-book catalogue, and to make Twelfth Planet Books available in as many different formats as possible. While Australian readers are taking to electronic reading quite slowly, I’m aware that’s not the case in other countries, and as international postage climbs higher and higher, it’s important to make those options available. Twelfth Planet Press e-books have no DRM or global restrictions. With a few exceptions, though (such as the substantial and sprawling edifice that is Sprawl) Twelfth Planet Press books tend to be slimline and lovely to look at, so I hope international readers will also be interested in picking up hard copies of our titles. I’m a busy person myself and prefer quality over quantity in my reading matter – I still feel the novella is really the perfect literary form – so I like to make books that pack a punch in a small package.

This Spotlight feature appeared in the August 2011 issue of Locus Magazine.

2018 in Listening by Amy Goldschlager 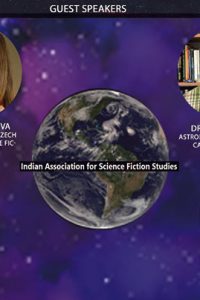 One thought on “Spotlight on: Alisa Krasnostein, Publisher”