This week we’ll be talking about “The Things” by Peter Watts. It appears on the Locus, Hugo, BSFA, and Shirley Jackson shortlists, as well as most recently showing up on the Sturgeon Award list. This makes it by far the most nominated piece of short fiction this year, as well as being a rare cross-over between the general genre awards and the horror awards.

This story has already been the subject of a lively Story Club discussion over at Torque Control. Some of the opinions:

Gardner Dozois reviewed the story in the March 2010 Locus:

The Janaury 10 Clarkesworld has a strong story by Peter Watts, “The Things”, which retells the story of John W. Campbell’s classic story “Who Goes There?” — twice filmed as The Thing from Another World and The Thing — from the perspective of the alien “monster” against whom the humans are struggling for survival in an isolated winter encampment in Antarctica. Watts does an excellent job of showing a totally alien way of looking at life, turning our understanding of the alien’s motivations for doing what he does on its head. The only potential weak spot is that the story seems to be tied specifically to John Carpenter’s 1982 film version; those who have instead seen Christian Nyby’s 1951 version — which scared the piss out of me as a little kid — may be confused.

My immediate reaction is, basically, “This is the kind of gimmicky crap that annoys me when Neil Gaiman does it, and Watts is no Neil Gaiman.” After a bit more thought, it’s not as bad as that, but it’s far from impressive.

I thought “The Things” was a decent story although a bit flat/limited/unambitious. I’ve read a fair amount of this sort of twice-told POV-reversal story, and I’ve read several of Watts’s novels and short stories. I feel like if you had told me the pitch for this one–Watts re-writes The Thing from the point of view of the monster–this is almost exactly the story I’d expect, at a minimum level. Interesting alien physiology and alternative system of intelligence, check; explanation of limitations of human biological systems we take for granted as normal, check; negative biological metaphor for something we regard as making humanity superior, check; everybody-bar-one dies and humanity is screwed, check. It’s a story that seems fully implied by its concept, that never really becomes more–and so is more impressive as an exercise than a story.

Last short story club we talked about the genre’s tendency to riff on previous texts and there was a general sense of weariness with this. I think in part that was because authors were taking major source texts and doing very little with them. So it is nice to see Watts taking a minor, slightly trashy text (since he obviously is using the 1982 film as his basis) and beefing it up into a proper SF story.

My problem is with the first-person narrative. The alien talks too much to itself, repeats itself. And in particular it tries to convince itself, justify to itself what it is doing. It protests too much.

Abigail Nussbaum has updated her opinion upon re-reading:

I didn’t read “The Things” until last fall, when it participated in Torque Control’s Short Story Club. My reaction at the time was that it was a well-written story that depended too heavily on its source material, and that if, like myself, you haven’t seen the original film, much of its attractions will be lost upon you. Upon a second reading for this review, I want to modify that judgment a little. I still think that The Thing is too present within “The Things.” There are too many scenes whose purpose is obviously to retell and alter the meaning of scenes from the movie, and whose emotional impact is lost on someone who hasn’t watched it. But I don’t think that the story depends on the film.

On the contrary, if you lopped off the explicit references to The Thing, the explanations of what was going on under the shed or who was taken over when, you’d have a perfectly coherent story that I would have enjoyed a great deal more than I did “The Things.” There’s a lot of substance here that is completely unrelated to the movie–the story of an alien to whom all life is a single, infinitely changeable entity, who takes a long time to even understand that life on Earth can function as discrete beings with a fixed biology, and is disgusted and horrified by that realization. It’s not a new trope, but Watts handles it with the intelligence and viciousness for which he’s become famous, and the story would have worked perfectly well without the film as a framework.

I’m of the camp that hadn’t seen the movie (although I’ve read Campbell’s novella a couple of times) and felt that the story suffered a bit without that touchstone. Your thoughts? 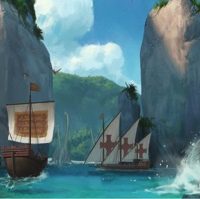 4 thoughts on “Short Story Club: The Things by Peter Watts”